Flax (also known as common flax or linseed) (Linum usitatissimum) is a plant.

The fibres of flax are used to make linen. High-quality paper used in banknotes is also made from flax fibres. An oil (linseed oil) can be made from the dried ripe flax seeds. Flax has been used for a long time in such tasks as making bows and candles. 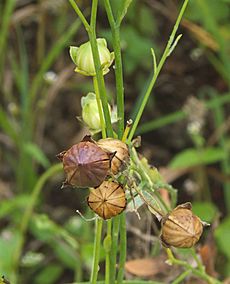 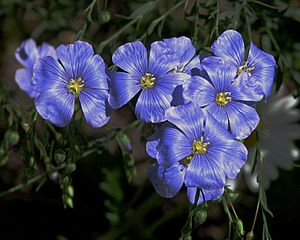 The flowers are pure pale blue, 15–25 mm in diameter, with five petals. The fruit is a round, dry capsule 5–9 mm in diameter, containing several glossy brown seeds shaped like an apple pip, 4–7 mm long.

The earliest evidence of humans using wild flax as a textile comes from the present day Republic of Georgia, where spun, dyed, and knotted wild flax fibers were found in Dzudzuana Cave and dated to the Upper Paleolithic, 30,000 years ago. Flax was first domesticated in the Fertile Crescent region. Evidence exists of a domesticated oilseed flax with increased seed size by 9,000 years ago from Tell Ramad in Syria. Use of the crop steadily spread, reaching as far as Switzerland and Germany by 5,000 years ago. In China and India, domesticated flax was cultivated also at least 5,000 years ago.

Flax was cultivated extensively in ancient Egypt, where the temple walls had paintings of flowering flax, and mummies were entombed in linen. Egyptian priests only wore linen, as flax was considered a symbol of purity. Phoenicians traded Egyptian linen throughout the Mediterranean and the Romans used it for their sails. As the Roman Empire declined, so did flax production, but Charlemagne revived the crop in the eighth century CE with laws designed to publicize the hygiene of linen textiles and the health of linseed oil. Eventually, Flanders became the major center of the linen industry in the European Middle Ages. In North America, flax was introduced by the colonists and it flourished there, but by the early twentieth century, cheap cotton and rising farm wages had caused production of flax to become concentrated in northern Russia, which came to provide 90% of the world's output. Since then, flax has lost its importance as a commercial crop, due to the easy availability of more durable fibres. 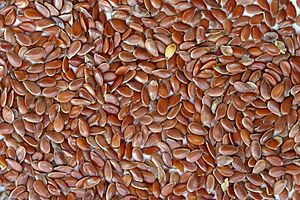 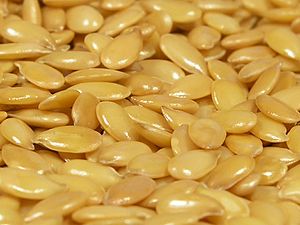 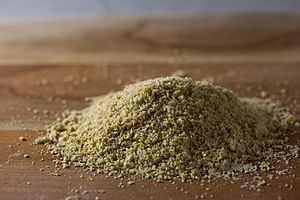 Flax is grown for its oil, used as a nutritional supplement, and as an ingredient in many wood-finishing products. Flax is also grown as an ornamental plant in gardens. Flax fibers are used to make linen. The Latin species name usitatissimum means "most useful".

Flax fibers are taken from the stem of the plant, and are two to three times as strong as those of cotton. Additionally, flax fibers are naturally smooth and straight. Europe and North America depended on flax for vegetable-based cloth until the nineteenth century, when cotton overtook flax as the most common plant used for making rag-based paper. Flax is grown on the Canadian prairies for linseed oil, which is used as a drying oil in paints and varnishes and in products such as linoleum and printing inks. In India, flax seed oil also is known as alsi in Hindi and javas in Marathi. It is mainly used in Savji curries, such as mutton curries.

Linseed meal, the by-product obtained after oil production from flax seeds, is used to feed livestock. It is a protein-rich feed for ruminants, rabbits and fish. 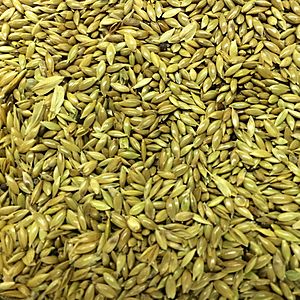 Flaxseeds occur in two basic varieties: brown and yellow or golden (also known as golden linseeds). Most types have similar nutritional characteristics and equal numbers of short-chain omega-3 fatty acids. The exception is a type of yellow flax called solin (trade name Linola), which has a completely different oil profile and is very low in omega-3 FAs. Flaxseeds produce a vegetable oil known as flaxseed oil or linseed oil, which is one of the oldest commercial oils. It is an edible oil obtained by expeller pressing, sometimes followed by solvent extraction. Solvent-processed flaxseed oil has been used for many centuries as a drying oil in painting and varnishing.

Although brown flax may be consumed as readily as yellow, and has been for thousands of years, its better-known uses are in paints, for fiber, and for cattle feed.

Flaxseed sprouts are edible, with a slightly spicy flavor. In northern India, flaxseed, called tisi or alsi, traditionally is roasted, powdered, and eaten with boiled rice, a little water, and a little salt.

Whole flaxseeds are chemically stable, but ground flaxseed may go rancid when left exposed to air at room temperature in as little as one week because of oxidation. 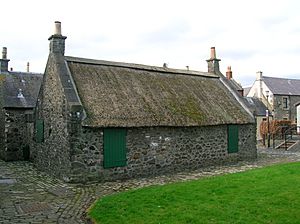 Flax fiber is extracted from the bast beneath the surface of the stem of the flax plant. Flax fiber is soft, lustrous, and flexible; bundles of fiber have the appearance of blonde hair, hence the description "flaxen" hair. It is stronger than cotton fiber, but less elastic. The best grades are used for linen fabrics such as damasks, lace, and sheeting. Coarser grades are used for the manufacturing of twine and rope, and historically, for canvas and webbing equipment. Flax fiber is a raw material used in the high-quality paper industry for the use of printed banknotes, rolling paper for cigarettes, and tea bags.

The use of flax fibers dates back tens of thousands of years; linen, a refined textile made from flax fibers, was worn widely by Sumerian priests more than 4,000 years ago. Industrial-scale flax fiber processing existed in antiquity. A bronze-age factory dedicated to flax processing was discovered in Euonymeia.

Flax mills for spinning flaxen yarn were invented by John Kendrew and Thomas Porthouse of Darlington, England, in 1787. New methods of processing flax have led to renewed interest in the use of flax as an industrial fiber. 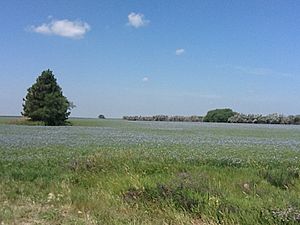 A flax field in bloom in North Dakota, United States 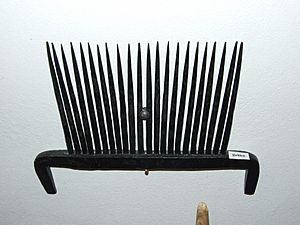 A hackle or heckle, a tool for threshing flax and preparing the fiber 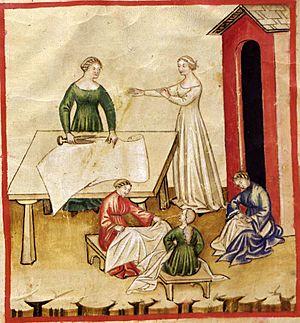 Threshing is the process of removing the seeds from the rest of the plant. Separating the usable flax fibers from other components requires pulling the stems through a hackle and/or beating the plants to break them.

Flax processing is divided into two parts: the first part is generally done by the farmer, to bring the flax fiber into a fit state for general or common purposes. This can be performed by three machines: one for threshing out the seed, one for breaking and separating the straw (stem) from the fiber, and one for further separating the broken straw and matter from the fiber.

The second part of the process brings the flax into a state for the very finest purposes, such as lace, cambric, damask, and very fine linen. This second part is performed by a refining machine. 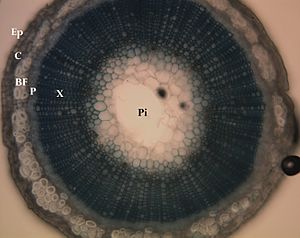 Before the flax fibers can be spun into linen, they must be separated from the rest of the stalk. The first step in this process is retting, which is the process of rotting away the inner stalk, leaving the outer parts intact. At this point, straw, or coarse outer stem (cortex and epidermis), is still remaining. To remove this, the flax is "broken", the straw is broken up into small, short bits, while the actual fiber is left unharmed. Scutching scrapes the outer straw from the fiber. The stems are then pulled through "hackles", which act like combs to remove the straw and some shorter fibers out of the long fiber.

Several methods are used for retting flax. It can be retted in a pond, stream, field, or tank. When the retting is complete, the bundles of flax feel soft and slimy, and quite a few fibers are standing out from the stalks. When wrapped around a finger, the inner woody part springs away from the fibers.

In field retting, the flax is laid out in a large field, and dew is allowed to collect on it. This process normally takes a month or more, but is generally considered to provide the highest quality flax fibers, and it produces the least pollution.

Retting can also be done in a plastic trash can or any type of water-tight container of wood, concrete, earthenware, or plastic. Metal containers will not work, as an acid is produced when retting, and it would corrode the metal.

Dressing the flax is the process of removing the straw from the fibers. Dressing consists of three steps: breaking, scutching, and heckling. The breaking breaks up the straw. Some of the straw is scraped from the fibers in the scutching process, and finally, the fiber is pulled through heckles to remove the last bits of straw.

Breaking breaks up the straw into short segments.

Scutching removes some of the straw from the fiber.

Heckling is pulling the fiber through various sizes of heckling combs or heckles. A heckle is a bed of "nails"—sharp, long-tapered, tempered, polished steel pins driven into wooden blocks at regular spacing.

All content from Kiddle encyclopedia articles (including the article images and facts) can be freely used under Attribution-ShareAlike license, unless stated otherwise. Cite this article:
Flax Facts for Kids. Kiddle Encyclopedia.