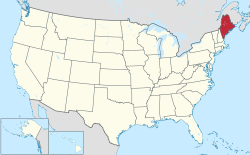 Map of the United States with Maine highlighted

Maine is a state located in Northeastern United States. According to the 2010 United States Census, Maine is the 9th least populous state, with 1,328,361 inhabitants, but the 12th smallest by land area spanning 30,842.92 square miles (79,882.8 km2) of land. Maine is divided into 16 counties and contains 488 incorporated municipalities consisting of cities, towns, and plantations.

The list, for each city, shows the population in 2010, the population estimate of 2019, the growth/shrinking percentage between the three, and the date of incorporation as a city. Maine has 23 incorporated cities, listed in the below table. Towns in Maine with significantly large populations include Brunswick and Scarborough with populations of 20,535 and 20,991, respectively, as of 2019.

All content from Kiddle encyclopedia articles (including the article images and facts) can be freely used under Attribution-ShareAlike license, unless stated otherwise. Cite this article:
List of cities in Maine Facts for Kids. Kiddle Encyclopedia.