Little Elm is a city in Denton County, Texas, United States, and a part of the Dallas-Fort Worth Metroplex. It is an extended suburb of Dallas. The population was 3,646 at the 2000 census. By the 2010 census, the city total had jumped to 25,898, making Little Elm one of the fastest growing municipalities in Texas since 2000 in terms of percentage. At the entrance to the city limits, population signs reflect a size of more than 31,000 as of 2013.

Little Elm is generally located along the northern and eastern shores of Lewisville Lake at the cross roads of Eldorado Parkway and FM 423 and includes stretches of U.S. Highway 380. Its neighbors include Frisco to the east, The Colony and Hackberry to the south, Prosper, Aubrey, and Providence to the north, and Oak Point, Cross Roads, and Lakewood Village to the west. 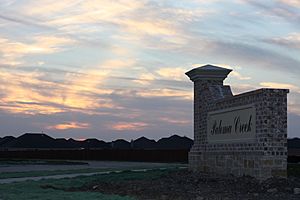 Little Elm has more miles of shoreline (66 miles) than any city in DFW. Lakeside amenities off Eldorado Parkway include a cable wake board park, a boat ramp, a massive swim beach, a marina, an amphitheater on the water, and many miles of trail. Other park attractions include the disc golf course at McCord Park on FM 423.

Because Little Elm is rapidly growing and expanding, most of the city is new. These new constructions not only include new parks, government buildings, and businesses, but also include a diverse housing mix of estate residential custom homes, traditional single-family housing, townhouses, duplexes, multi-family, and manufactured homes. Some of the newer subdivisions include Paloma Creek, The Towers by the Park, and Frisco Ranch.

Little Elm's current estimated population, as of May 1, 2016, is 34,355. Including active subdivisions in the Extra-Territorial Jurisdiction (ETJ), that figure exceeds 45,000. Little Elm's build-out population is anticipated to be over 90,000.

The American Planning Association, Texas Chapter, with an all-time record number of applicants, honored the Town of Little Elm with the Current Planning Award for its 2009 Commercial Design Standards Report.

The Texas Chapter of the American Planning Association honored Little Elm with a Certificate of Achievement for Planning Excellence award during the following years: 2007, 2011, 2012, 2013, 2014.

In 2013, the Cross Timbers Urban Forestry Council presented Little Elm with a Bronze Leaf Award for its commitment to urban forestry initiatives.

The Dallas Business Journal selected McCord Farm as a finalist for its 2012 Suburban Multi-Family Deal of the Year award. McCord Farm includes three phases of luxury multi-family developments along the FM 423 corridor and McCord Park, a wooded 38 acre public park along Cottonwood Creek donated to the Town of Little Elm and constructed by the developer.

The Texas Chapter of the American Planning Association named Chairman Michael McClellan the 2012 Planning Commissioner of the Year. This prestigious and competitive honor is awarded to only one (1) commissioner in the State each year by the Texas Chapter.

Little Elm has an extensive and comprehensive parks system with 5 major community parks, including Little Elm Park, Cottonwood Park, Beard Park, McCord Park, and Union Park. Little Elm has many miles of hike and bike trails constructed and planned along the lake and its tributaries.

Little Elm Park, located in the Lakefront district along Eldorado Parkway, offers a popular swim beach, boat ramp, an amphitheater on the lake, volleyball courts, soccer and softball fields, miles of trail, and hosts many special events such as the annual July Jubilee, Fall Festival, Summer Rhythms, Pumpkin Hollow, seasonal 5k and triathlon competitions, and many other live band events.

Cottonwood Park, also located in the Lakefront district at the southern terminus of Lobo Lane, is home to Cottonwood Creek Marina, softball fields, miles of trail, and is planned for future development. Union Park, currently under construction north of U.S. 380 by Hillwood Communities, is expected to be open soon. 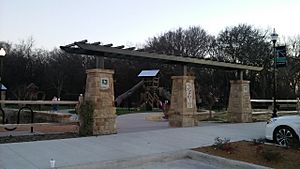 Beard Park, located at the intersection of Main Street and Eldorado Parkway, is home to the Hydrous wake board park, the Taphouse beer garden, Hula Hut, future trails, future historic village, and is the future home of Little Elm's Farmers Market, which is currently set up in the Hobby Lobby shopping center.

McCord Park, located along FM 423, is a wooded 38 acre park containing gentle slopes, a creek, heavy tree cover, a fishing pond, and acres of open space. Amenities in the public park include over a mile of hike & bike trail, an 18-hole disc golf course, fishing dock, pedestrian bridges, picnic areas, and a playground. The disc golf course was designed by John Houck, a world-renowned disc golf course designer. The park will also be home to the Town’s 6th LED digital marquee monument sign, which will be the first on FM 423.

Through creative planning and zoning, McCord Park was donated to the Town and constructed by the developers (Western Rim) of the luxury multi-family projects adjacent to it. The total value of the land and park improvements is estimated to be over 5 million dollars, all of which was paid for by the developer. Vital to the Town’s master Hike & Bike trail plan, McCord Park provides an invaluable link from FM 423 to Veteran’s Memorial Bridge on Witt Road and eventually westward along Lewisville Lake to the Lakefront district. It also offers a critical connection point into Frisco’s trail system, which is part of a regional master trail system, one day ensuring that Little Elm residents could continually recreate to Dallas via trail without interruption.

Although the Dallas Business Journal already selected McCord Farm (including the apartments and McCord Park) as a finalist for its 2012 Suburban Multi-Family Deal of the Year award, the park has more planned.

The climate in this area is characterized by hot, humid summers and generally mild to cool winters. According to the Köppen Climate Classification system, Little Elm has a humid subtropical climate, abbreviated "Cfa" on climate maps.

Little Elm has great access to the rest of the DFW Metroplex via several regionally significant thoroughfares. The Dallas North Tollway is a 5-minute drive east of Little Elm, which opens up the greater north Dallas region to residents, including several large employment and shopping hubs.

Eldorado Parkway, which functions as Little Elm's main street, provides a critical connection to the region by linking U.S. 75 and I-35E, including the Lewisville Lake Toll Bridge. Portions of Eldorado Parkway are currently under construction by TXDOT and will be 6-lanes with a divided median.

FM 423 functionally serves as Little Elm's eastern boundary, although Little Elm crosses east of FM 423 in several places. This 6-lane thoroughfare, currently under construction by TXDOT, connects SH 121 in The Colony to the U.S. 380 corridor. The U.S. 380 corridor is in the northern part of Little Elm and provides an invaluable regional connection between two of the four county seats of the Metroplex (McKinney and Denton). TXDOT has no formal plans to expand U.S. 380 in Denton County; however, sufficient right-of-way exists to provide 8-lanes with a divided median if TXDOT prioritizes the project.

All content from Kiddle encyclopedia articles (including the article images and facts) can be freely used under Attribution-ShareAlike license, unless stated otherwise. Cite this article:
Little Elm, Texas Facts for Kids. Kiddle Encyclopedia.