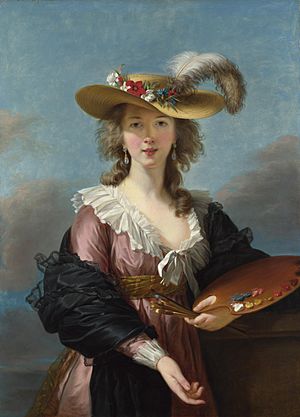 Louise Élisabeth Vigée Le Brun (Marie Élisabeth Louise; 16 April 1755 – 30 March 1842) was a painter. She is the most important female painter of the 18th century. Her style is considered Rococo with an interest in Neoclassicism. Sometimes, her name is spelled Vigée-Lebrun.

She painted more than 30 portraits of Marie Antoinette over a six year period. She was accepted as a member of the Académie Royale de Peinture et de Sculpture in 1783. She left France after the arrest of the royal family during the French Revolution. She lived and worked in Italy, Austria, and Russia. Her work met great critical acclaim in Rome. She was elected to the Roman Accademia di San Luca. In Russia, she painted many aristocrats including Catherine the Great's family. She was made a member of the Academy of Fine Arts of Saint Petersburg.

Vigée Le Brun returned to France during the reign of Emperor Napoleon I. Her relationship with the new regime was not completely harmonious. After all, she was a royalist and the former portraitist of Marie Antoinette. She visited England and painted British notables including Lord Byron. In 1807 she traveled to Switzerland where she was made an honorary member of the Société pour l'Avancement des Beaux-Arts of Geneva. She published her memoirs in 1835 and 1837. She lived in Paris, and died there on 30 March 1842. Vigée Le Brun's legacy includes 660 portraits and 200 landscapes.

All content from Kiddle encyclopedia articles (including the article images and facts) can be freely used under Attribution-ShareAlike license, unless stated otherwise. Cite this article:
Louise Élisabeth Vigée Le Brun Facts for Kids. Kiddle Encyclopedia.