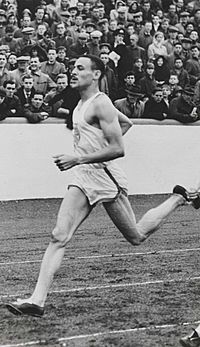 Whitfield at the 1948 Summer Olympics in London

Malvin Greston Whitfield (October 11, 1924 – November 18, 2015) was an American former athlete and goodwill ambassador. He was the Olympic champion in the 800 metres at the 1948 and 1952 Summer Olympics. Overall, he is a five-time Olympic medalist (three gold, one silver, one bronze).

Whitfield was born in Bay City, Texas. He moved at age 4 to Watts, Los Angeles. He joined the United States Army Air Forces in 1943 as a member of the Tuskegee Airmen. After World War II he remained in the military, but also enrolled at the Ohio State University. He served inn the Korean War. Whitfield died under hospice care in Washington, D.C. on the night of November 18, 2015 from heart failure, aged 91.

All content from Kiddle encyclopedia articles (including the article images and facts) can be freely used under Attribution-ShareAlike license, unless stated otherwise. Cite this article:
Mal Whitfield Facts for Kids. Kiddle Encyclopedia.