Mason Tony Mount (born 10 January 1999) is an English professional footballer who plays as an attacking or central midfielder for Premier League club Chelsea and the England national team.

Mount began his senior club career with Chelsea. He joined Vitesse and Derby County on consecutive loans between 2017 and 2019; he established himself as an integral player for Chelsea in the following years, and won the UEFA Champions League.

Mount won the UEFA European Under-19 Championship with the England national under-19 team in 2017. He made his senior international debut in 2019, at age 20, and was part of the England team at UEFA Euro 2020.

Mount was born in Portsmouth, Hampshire. His father, Tony, was a former non-league footballer who later coached local clubs, namely Havant Town. As a child, Mount played locally for Boarhunt Rovers and United Services Portsmouth. In 2003, at age 4, he spent one day a week training in the academies at Portsmouth and Chelsea. Citing Frank Lampard, Luka Modrić and Andrés Iniesta as his favourite players, Mount eventually joined Chelsea in 2005.

At age 18, Mount was promoted to Chelsea's senior team; he previously debuted for the club's under-18 team in 2014, at age 15, and also appeared consistently for the club's under-21 team by 2016. Mount scored 10 goals in 30 games in the club's victorious 2016–17 U18 Premier League campaign. He also won two FA Youth Cups, the UEFA Youth League, and Chelsea Academy Player of the Year by 2017.

Loans to Vitesse and Derby County

Mount joined Dutch Eredivisie club Vitesse on 24 July 2017 on a season-long loan. He made his first-team debut on 26 August, as a 77th-minute substitute during Vitesse's 2–1 home defeat against AZ. The following month, he was given his first start in Vitesse's KNVB Cup first-round defeat away to fifth-tier team Swift, playing the full 90 minutes of the 0–0 draw, which Swift won in a penalty shoot-out. He scored his first goal for Vitesse on 1 October in the 76th minute of a 1–1 home draw with Utrecht. Mount went onto appear in the Eredivisie Team of the Year and won Vitesse Player of the Year.

During Vitesse's Eredivisie European play-off semi-final first leg against ADO Den Haag on 9 May 2018, Mount scored his first hat-trick, as Vitesse won 5–2 away. In the second leg, Mount scored in a 2–1 win as Vitesse won 7–3 on aggregate. In the first leg of the final against Utrecht, Mount opened the scoring but was booked and therefore suspended for the second leg. Mount made 39 appearances in all competitions for Vitesse, scoring 14 times, before returning to Chelsea.

Mount joined Championship club Derby County on 17 July 2018 on a season-long loan. He scored a 60th-minute equaliser on his debut for Derby on 3 August 2018, during a 2–1 away victory over Reading. Mount was sidelined for two months after suffering a hamstring injury in a FA Cup game against Accrington Stanley. He returned in a 6–1 win over Rotherham United, winning a penalty for teammate Martyn Waghorn and later scoring. Two weeks later, he scored his second senior hat-trick in a 4–0 Championship league game against Bolton Wanderers, keeping Derby in contention for the promotion playoff. 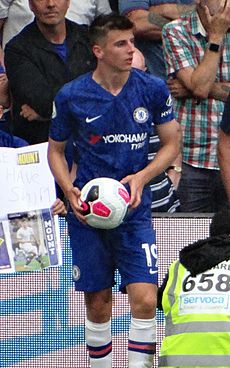 Mount playing for Chelsea in 2019

On 15 July 2019, Mount signed a new five-year contract with Chelsea. He made his competitive debut for Chelsea on 11 August 2019 in a 0–4 away defeat to Manchester United in the Premier League. He scored his first Chelsea goal a week later against Leicester City during Frank Lampard's home debut as manager at Stamford Bridge, a 1–1 draw, and added another in the next game away to Norwich City. On 17 September, he suffered an ankle injury against Valencia in the Champions League opener.

In March 2020, Mount was spoken to by Chelsea for ignoring self-isolation rules during the COVID-19 pandemic. While the entire squad was forced to self-isolate due to Callum Hudson-Odoi's positive COVID-19 test, Mount had gone to play football with friends, including West Ham's Declan Rice. On 22 July 2020, he became the first Chelsea Academy graduate to make his first team debut and complete 50 appearances in the same season. On the final day of the 2019–20 Premier League season in a 2–0 victory against Wolves, Mount scored the first goal from a free kick and assisted Olivier Giroud for the second goal to help Chelsea secure a place in the 2020–21 UEFA Champions League.

Mount started the 2020–21 season well, as he featured in all Chelsea matches including the one against Barnsley in the third round of the EFL Cup on 23 September, which ended in a 6–0 win at home. Three days later on 26 September, Mount scored his first goal of the season against West Bromwich Albion in a 3–3 away draw. In the next fixture, however, Mount missed the decisive penalty in Chelsea’s 5–4 shootout loss away to Tottenham Hotspur in the fourth round of the EFL Cup on 29 September. He scored in back-to-back games in January, first in a 4–0 win at Morecambe in the third round of the FA Cup and then away to Fulham in a 1–0 Premier League victory. On 24 January 2021, Mount captained Chelsea for the first time in a 3–1 win at home over Luton Town in the FA Cup. On 4 March, Mount scored the only goal in a 1–0 away league win over Liverpool, handing the Reds their fifth consecutive league defeat at Anfield for the first time in their history.

Early in the season, Mount's presence in the Chelsea and England starting line-ups was alleged by fans and media to be because of favouritism by respective team managers, Lampard and Gareth Southgate. These doubts were allayed after Thomas Tuchel acknowledged Chelsea's growing reliance on Mount calling him "crucial for our game" and "an absolutely key player" and endorsed him as one of the best players in Europe. On 18 May, Mount was voted as Chelsea's Player of the Year. On 29 May, Mount provided the assist for Kai Havertz's goal, as Chelsea won 1–0 against Manchester City in the final in Porto to win the Champions League for the second time in their history, and Mount’s first trophy with the club.

Mount has represented England at under-16, under-17, under-18 and under-19 levels. Mount represented the under-17s at the 2016 UEFA European Under-17 Championship.

Mount was included in the under-19 team for the 2017 UEFA European Under-19 Championship. He provided the assist for Lukas Nmecha to score the winning goal against Portugal in the final. He was subsequently named Golden Player of the tournament. On 27 May 2019, Mount was included in England's 23-man squad for the 2019 UEFA European Under-21 Championship.

Following his impressive season with Vitesse, Mount was invited by manager Gareth Southgate to train with the senior team for a week ahead of the 2018 FIFA World Cup. He was called up to the senior team for the UEFA Nations League matches against Croatia and Spain in October 2018. Mount made his debut for the England senior team on 7 September 2019 as a 67th-minute substitute in England's 4–0 home win over Bulgaria in UEFA Euro 2020 qualifying. He scored his first goal for England on 17 November in a 4–0 away win against Kosovo in UEFA Euro 2020 qualifying.

Mount was named in the 26-man England squad for Euro 2020. On 22 June 2021, Mount and fellow England player Ben Chilwell were forced to self-isolate after coming into contact with Scotland player Billy Gilmour, who tested positive for COVID-19 after England's 0-0 draw with Scotland at the tournament.

Mount has been best friends with fellow England international Declan Rice since childhood.

Mount supports Portsmouth, citing former Portsmouth players such as Peter Crouch, Jermain Defoe and Nwankwo Kanu as his footballing heroes whilst growing up.

All content from Kiddle encyclopedia articles (including the article images and facts) can be freely used under Attribution-ShareAlike license, unless stated otherwise. Cite this article:
Mason Mount Facts for Kids. Kiddle Encyclopedia.