Kai Lukas Havertz (born 11 June 1999) is a German professional footballer who plays as an attacking midfielder for Premier League club Chelsea and the Germany national team. Starting off his career with Alemannia Mariadorf's youth academy, Havertz was promoted to Bayer Leverkusen's first team in 2016 after playing for his hometown club Alemannia Aachen and Leverkusen's youth system.

Upon making his debut for the latter in 2016, Havertz became the club's youngest-ever debutant in the Bundesliga, and he became their youngest-ever goalscorer when he scored his first goal the following year. He is also the youngest player to reach the milestones of 50 and 100 league appearances in the German top flight. With Chelsea, he won the 2020–21 UEFA Champions League, scoring the only goal in the final against Manchester City.

Havertz received his first experience in football at the age of four when he joined amateur club Alemannia Mariadorf, where his grandfather, Richard, was chairman of the club. In 2009, he was signed by 2. Bundesliga club Alemannia Aachen where he spent only a year in the club's academy before joining Bayer Leverkusen at the age of 11. In the years that followed, he had to overcome the challenges associated with growth spurts and in 2016, after scoring 18 goals for the club's U-17 team, he was awarded the silver U-17 Fritz Walter Medal before breaking into Leverkusen's senior team the following year. 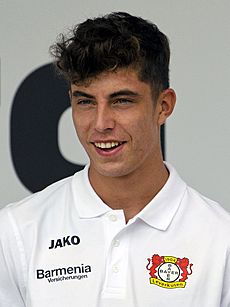 Havertz with Bayer Leverkusen in 2018

Havertz made his debut for Bayer Leverkusen on 15 October 2016, coming on as a second-half substitute for Charles Aránguiz in a 2–1 Bundesliga loss to Werder Bremen. Upon entering the field of play, he became the club's youngest-ever Bundesliga debutant, at the age of 17 years and 126 days, although his record was broken (by 111 days) by Florian Wirtz in 2020. On 17 February 2017, he assisted teammate Karim Bellarabi to score the 50,000th Bundesliga goal. Four days later, following the suspension of teammate Hakan Çalhanoğlu, he was handed his first Champions League start in the first leg of a round of 16 loss to Atlético Madrid. He was ruled out of the return leg of the fixture in March, however, as the match clashed with the examinations period at his school. He scored his first goal for the club on 2 April, netting a later equaliser in a 3–3 draw with VfL Wolfsburg. Upon doing so, Havertz broke another club record to become Leverkusen's youngest-ever goalscorer in the Bundesliga, at the age of 17. He ultimately made 28 appearances across all competitions and scored four goals, including a brace against Hertha BSC on the final day of the season, as Leverkusen ended the campaign in 12th position.

On 14 April 2018, Havertz became the youngest player in the history of the Bundesliga to reach 50 appearances at 18 years and 307 days old, breaking the record previously held by Timo Werner. He went on to end his second full campaign with the club with 30 league appearances and three goals to his name as Leverkusen ended the season in fifth place.

Havertz continued to impress during the following season, despite Leverkusen initially struggling in the league, and by the mid-way point of the campaign was the only player to have started every match for the club, scoring six goals along the way. On 20 September 2018, Havertz scored his first two goals in European competitions in a 3–2 win against Ludogorets Razgrad in the 2018–19 UEFA Europa League. On 26 January 2019, he became Leverkusen's youngest-ever penalty scorer when he scored from the spot in a 3–0 league win over Wolfsburg, aged 19 years, seven months and 16 days. The following month, he became the second youngest-ever player to achieve 75 Bundesliga appearances, behind Julian Draxler, when he started and scored in a 2–0 win over Fortuna Düsseldorf. On 13 April, he scored on his 100th appearance for Leverkusen to help the club to a 1–0 league win over Stuttgart. The goal, his 13th for the campaign, also saw him become the youngest player since Stuttgart's own Horst Köppel in 1967–68 to score 13 goals in a single league season. On 5 May, he scored his 15th goal of the campaign during a 6–1 win over Eintracht Frankfurt; a match which for the first time ever saw seven goals scored in the first half of a Bundesliga match. On the final day of the season, he became the highest scoring teenager in a single Bundesliga campaign when he scored his 17th goal during a 5–1 win over Hertha BSC. At the end of the season, he was named runner-up to Marco Reus for the German Footballer of the Year award, losing out by just 37 votes.

On the opening day of the 2019–20 campaign, Havertz scored in Leverkusen's 3–2 win over Paderborn, becoming the second-youngest player of all time behind Köppel to score 25 Bundesliga goals. In December, at the age of 20 years, six months and four days, he broke another of Werner's records to become the youngest-ever player to reach 100 Bundesliga appearances when he started in his team's 2–0 defeat to Köln. In the 2019–20 UEFA Europa League, Havertz scored in both matches against Porto in the round of 32, then he scored a goal in a 2–1 defeat to Inter Milan in the quarter-final. 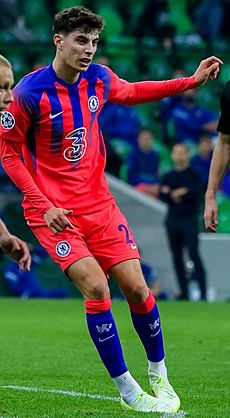 Havertz playing for Chelsea in 2020

On 4 September 2020, Havertz signed a five-year contract with Premier League club Chelsea. The transfer fee was reported to be worth an initial £62 million, which could rise to £71 million with add-ons, making him Chelsea's second-most expensive signing after Kepa Arrizabalaga. On 14 September, he made his debut with Chelsea in the league opener against Brighton & Hove Albion, which ended in a 3–1 away win. On 23 September, Havertz scored his first career hat-trick and his first Chelsea goals in a 6–0 home win over Barnsley in the third round of the EFL Cup. Havertz scored his first-ever Premier League goal against Southampton on 17 October, in a 3–3 draw at home. On 4 November 2020, it was revealed that Havertz had tested positive for COVID-19.

Havertz made his debut for the Germany national under-16 team on 11 November 2014, starting in the friendly match against the Czech Republic before being substituted out in the 57th minute for Tom Baack. The match finished as a 3–1 win for Germany.

Havertz was included in Germany's squad for the 2016 UEFA European Under-17 Championship in Azerbaijan. He appeared in all five of Germany's matches, scoring once before Germany were eliminated by Spain in the semi-final.

Following a 15-month absence from youth internationals, Havertz made his debut for Germany's under-19 team, debuting on 31 August 2017 in the 0–0 friendly draw against Switzerland, coming on in the 72nd minute for Palkó Dárdai. On 4 October 2017, in his third appearance for the under-19 team, Havertz scored four goals in a 5–1 win against Belarus in the first round of European Under-19 Championship qualifying. He was later named captain of the under-19 team. 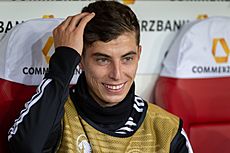 Havertz with Germany in 2019

On 29 August 2018, Havertz was called up to Germany's senior team for the first time by head coach Joachim Löw. He was included in the squad for Germany's UEFA Nations League match against France and friendly against Peru. Havertz made his international debut on 9 September 2018, coming on as a substitute in the 88th minute for Timo Werner against Peru, with the match finishing as a 2–1 home win for Germany. Upon making his debut, he became the first player born in 1999 to represent the national team. On 19 May 2021, he was selected to the German squad for the UEFA Euro 2020. On 19 June 2021, he scored Germany's third goal in the 51st minute in a 4–2 win over Portugal in the UEFA Euro 2020. He scored a goal in the final group fixture for a 2–2 draw against Hungary which saw his side qualify for the knockout phase of the competition.

Havertz has been described as a technically gifted, two-footed midfielder who is comfortable with the ball on either foot and adept with his head.During his formative years, his style of play drew early comparisons to compatriot Mesut Özil, with Havertz himself admitting the midfielder was a player he looked up to. By the age of 19, and following numerous impressive performances in the Bundesliga, further comparisons had been drawn between Havertz and former Leverkusen players such as Michael Ballack and Toni Kroos and some began describing him as a combination of all three and an Alleskönner – a player who can do everything. He has also been compared with Thomas Müller, as they both have the talent for finding spaces in congested areas and making the right runs, although Havertz has been described as a more elegant and skilful player than Müller. Havertz prefers the false nine role, which he plays in at Chelsea.

All content from Kiddle encyclopedia articles (including the article images and facts) can be freely used under Attribution-ShareAlike license, unless stated otherwise. Cite this article:
Kai Havertz Facts for Kids. Kiddle Encyclopedia.