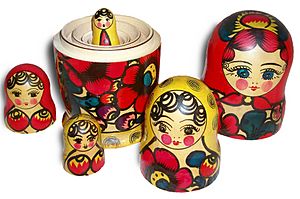 Matryoshka is a traditional Russian doll made of wood and painted with colorful ornaments. This doll is one of the most popular souvenirs in Russia. It is also widely distributed abroad under different names such as “Aunt Olga,” “Babushka” or “Mommy doll.” Although Matryoshka is called a doll it is actually a set of dolls of different sizes placed one in another. The reason for that lies behind the name “Matryoshka.” The name "Matryoshka" came from the traditional Russian name "Matryona". This name was associated with motherhood and fertility. The biggest doll symbolizes “mother” with her numerous “doll” family. 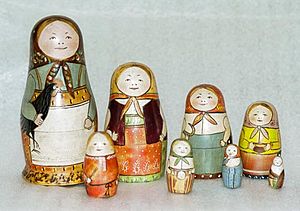 The original matryoshka set by Zvyozdochkin and Malyutin, 1892

The first Russian nested doll set was carved in 1890 by Vasily Zvyozdochkin and designed by Sergey Malyutin, who was a folk crafts painter in the Abramtsevo estate of Savva Mamontov, a Russian industrialist and patron of arts. The doll set was painted by Malyutin. Malyutin's doll set consisted of eight dolls—the outermost was a girl in a traditional dress holding a rooster. The inner dolls were girls and a boy, and the innermost a baby.

The origin of the inspiration for matroshka dolls is not clear. It is believed that Zvyozdochkin and Malyutin were inspired by eastern asian culture, for example the doll Kokeshi, however the Kokeshi figures cannot be placed one inside another. Sources differ in descriptions of the doll, describing it as either a round, hollow daruma doll, portraying a bald old Buddhist monk, or a Seven Lucky Gods nesting doll.

Savva Mamontov's wife presented the dolls at the Exposition Universelle in Paris, where the toy earned a bronze medal. Soon after, matryoshka dolls were being made in several places in Russia and shipped around the world. 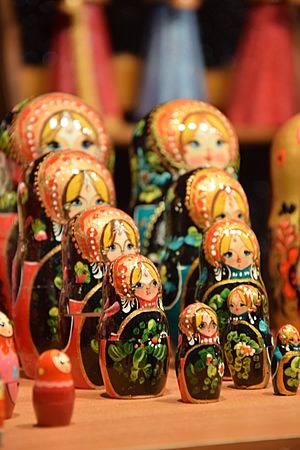 Matryoshka dolls are often designed to follow a particular theme; for instance, peasant girls in traditional dress. Originally, themes were often drawn from tradition or fairy tale characters, in keeping with the craft tradition—but since the late 20th century, they have embraced a larger range, including Russian leaders.

In the late 1980s and early 1990s during Perestroika, freedom of expression allowed the leaders of the Soviet Union to become a common theme of matryoshka, with the largest doll featuring then-current leader Mikhail Gorbachev. These became very popular at the time, affectionately earning the nickname of a "Gorby", namesake of Gorbachev. With the periodic succession of Russian leadership after the collapse of the Soviet Union, newer versions would start to feature Russian presidents Boris Yeltsin, Vladimir Putin, and Dmitry Medvedev.

Most sets feature the current leader as the largest doll, with the predecessors decreasing in size. The remaining smaller dolls may feature other former leaders such as Leonid Brezhnev, Nikita Khrushchev, Joseph Stalin, Vladimir Lenin, and sometimes several historically significant Tsars such as Nicholas II and Peter the Great. Yuri Andropov and Konstantin Chernenko almost never appear due to the short length of their respective terms. However, some less common sets may feature the current leader as the smallest doll, with the predecessors increasing in size, usually with Stalin or Lenin as the largest doll.

Some sets that include Yeltsin preceding Gorbachev were made during the brief period between the establishment of President of the RSFSR and the collapse of the Soviet Union, as both Yeltsin and Gorbachev were concurrently in prominent government positions. During Medvedev's presidency, Medvedev and Putin may both share the largest doll due to Putin still having a prominent role in the government as Prime Minister of Russia. As of Putin's re-election as the 4th President of Russia, Medvedev will usually succeed Yeltsin and preceded Putin in stacking order, due to Putin's role solely as the largest doll.

Political matryoshka usually range between 5 and 10 dolls per set.

All content from Kiddle encyclopedia articles (including the article images and facts) can be freely used under Attribution-ShareAlike license, unless stated otherwise. Cite this article:
Matryoshka Facts for Kids. Kiddle Encyclopedia.