Meguro (目黒区, Meguro-ku) is one of the 23 special wards of Tokyo, Japan.

The municipality calls itself "Meguro City" in English.

The area now known as Meguro was originally two towns. One was called Meguro, and the other was called Hibusuma. Both used to be parts of the Ebara District of Musashi Province. The two were combined to create Meguro ward for Tokyo City in 1932. The ward area has not changed since then. 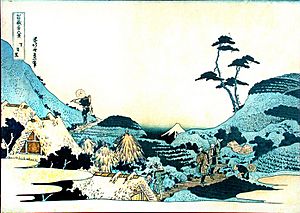 Hokusai ukiyo-e of a view of Mount Fuji from Shimo Meguro.

There are many embassies from African nations in the ward.

All content from Kiddle encyclopedia articles (including the article images and facts) can be freely used under Attribution-ShareAlike license, unless stated otherwise. Cite this article:
Meguro, Tokyo Facts for Kids. Kiddle Encyclopedia.