Mezoneuron kavaiense is a rare species of flowering plant in the pea family, Fabaceae, that is endemic to Hawaii. Common names include Uhiuhi (the Big Island and Kauaʻi), Kāwaʻu (Maui), and Kea (Maui). It is threatened by invasive species, particularly feral ungulates. 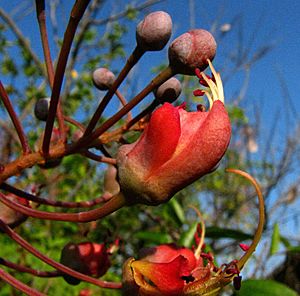 The plant is very rare today, with fewer than 100 individuals remaining in the wild, with some estimates at fewer than 50 plants. It does not reproduce very successfully, having a low level of recruitment. The plant's habitat has been degraded or destroyed by development, agriculture, and fire, and invaded by exotic species of plants and animals. The invasive fountaingrass (Pennisetum setaceum) is particularly harmful to the habitat, covering whole fields and increasing the danger of fire. The seeds are eaten by rats, and cattle and goats graze in the area. An insect, the black coffee twig borer (Xylosandrus compactus), damages the seedlings and saplings. Since the wood is so highly sought after, the trees are still in danger of being harvested. The population on the Big Island grows on the side of Hualālai, a dormant volcano, and so is technically in danger of being extirpated in the event of an eruption.

The plant was federally listed as an endangered species of the United States in 1986.

All content from Kiddle encyclopedia articles (including the article images and facts) can be freely used under Attribution-ShareAlike license, unless stated otherwise. Cite this article:
Mezoneuron kauaiense Facts for Kids. Kiddle Encyclopedia.