Nappanee is a city in Elkhart and Kosciusko counties in the U.S. state of Indiana. The population was 6,648 at the 2010 census. The name Nappanee probably means "flour." Nappanee holds the distinction of having the longest city name in the United States containing each letter in its name twice. The town has several tourist attractions: Amish Acres, Nappanee Raceway, The Arts & Crafts Festival, and the Apple Festival.

A tornado touched down in Nappanee around 10:30 pm on 18 October 2007, injuring at least five people and damaging 200 to 250 buildings, half of them severely. The tornado was classified as an EF3. The damage included three recreational vehicles factories that are among the community's largest employers: Fairmont Homes, Franklin Coach, and Gulf Stream Coach.

Nappanee was originally sought after because of its fertile farmland because of the headwaters of the Wabash River in northern Indiana. It is the southern gateway to the Northern Indiana Amish Country. Before the 1800s, Nappanee was inhabited by the Miami and Pottawatomi Indians. The first white settlers came to the area In 1830. By 1870, seven farms had been established and a population of forty people were settled in Nappanee. Nappanee grew tremendously after the construction of the B&O Railroad in 1874. Farmers sold land to the Railroad so that its tracks would run right next to Nappanee on its route to Chicago. The railroad brought more settlers to Nappanee, and the B&O officially gave Nappanee its name. The families who settled in Nappanee were largely religious and conservative. Over time the B&O Railroad became CSX. Nappanee is still surrounded by family farms of Anabaptists, including Amish, Mennonite, and the (Schwarzenau) Brethren.

In the 16th century a Protestant reformation took place in Central and Western Europe. This causes the Anabaptist movement in which the Amish and Mennonite were formed. Because of persecution the Dutch Anabaptist leader, Menno Simons, who was a former Catholic priest, moved himself and his followers to Switzerland. This is where the Mennonite group was formed. During the latter part of the 17th century a group from the Mennonites led by Jakob Ammann separated to form the Amish group which was named after its leader. During the 1700s, the Amish were attracted to the promise of religious freedom in America; this being Pennsylvania. Amish then migrated to Middlebury in 1841 from Pennsylvania. Nappanee's Amish originate from the early Amish immigrants from South West Germany to Pennsylvania in the 1700s. 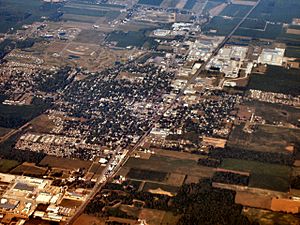 There were 2,545 households of which 37.8% had children under the age of 18 living with them, 52.7% were married couples living together, 12.0% had a female householder with no husband present, 5.7% had a male householder with no wife present, and 29.6% were non-families. 24.6% of all households were made up of individuals and 9.9% had someone living alone who was 65 years of age or older. The average household size was 2.60 and the average family size was 3.09.

There were 2,521 households out of which 39.2% had children under the age of 18 living with them, 57.1% were married couples living together, 9.3% had a female householder with no husband present, and 28.9% were non-families. 23.9% of all households were made up of individuals and 8.6% had someone living alone who was 65 years of age or older. The average household size was 2.65 and the average family size was 3.15.

Amish Acres was founded by Richard Pletcher. It is a historic farm and heritage resort which embodies a preserved barn and Amish house that help to "Embrace the Pace" as Nappanee's slogan implies. Amish Acres celebrates the Amish and shows features of their lifestyle. Amish Acre's original preserved Round Barn was relocated to it current location, and within it was constructed a theater in order to present shows. As well as see plays at Amish Acres, tourist can experience authentic Amish style cooking. Amish Acres offers other activities such as tours of an Amish house and a horse-drawn carriage ride. Amish Acres is home to Nappanee's Arts and Crafts Festival.

The Nappanee Apple Festival is held annually on the third week of September, lasting 3½ days. It consists of 100 craft booths, 50 commercial booths, 20 food vendors, two stages for entertainment, a large parade and an airplane flyover on Saturday morning. Nappanee annually bakes a seven-foot-wide apple pie that weighs 600 pounds. Every year an Apple Blossom Queen is chosen from NorthWood High School. The Nappanee Apple Festival attracted over 76,000 people in 2011 and is one of the largest festivals in the State of Indiana. Over 200 people from Nappanee volunteer to help with the Apple Festival each year. Other events include an apple peeling contest, 5K road run, half marathon, apple pie eating and apple peeling contests, goldfish races, wings & wheels show (cars and airplanes), tractor pull, farm tractor and antique farm equipment show, apple baking contest, kids and adult pedal pull contests, talent show, and a scholarship pageant.

Richard Pletcher, founder of the festival and Amish Acres, remains CEO and Jennifer Pletcher Wysong is the festival director. The festival and marketplace takes place around Amish Acre's pond. Amish Acres has received many awards, making its way onto The American Bus Association's list of TOP 100 Events in North America in 2012. This achievement was awarded four times in seven years. Readers of Sunshine Artist magazine rank the Art and Crafts Festival as the third-best Classic and Contemporary Craft Show in America. The Art festival was also listed at the number one in the category of "best attractions for group travel in Indiana" in Travel Trade Magazine. Senior Group Traveler selected the Arts and Craft Festival as one of only seventy "Editor's Choice of Outstanding Festivals and Major Events"; the Art and Craft Festival being the only one chosen from Indiana. Amish Acre's Art and Craft Festival attracts people from areas as far as Chicago, Indianapolis, Toledo, and Detroit. Amish Acre's grounds can only support up to 300 booths which consist of 250 different cities from 30 states.

All content from Kiddle encyclopedia articles (including the article images and facts) can be freely used under Attribution-ShareAlike license, unless stated otherwise. Cite this article:
Nappanee, Indiana Facts for Kids. Kiddle Encyclopedia.