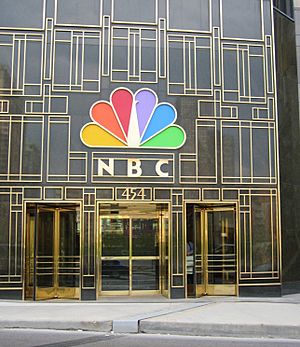 The NBC logo on a building.

NBC, whose letters stand for National Broadcasting Company, is an American television network that started in 1926 as a radio station. (Its first television progams aired in 1944.) It is owned by movie studio Universal Studios and appliance company General Electric. General Electric has sold 51% of the company to Comcast. NBC owns and operates the cable news channels Consumer News and Business Channel(CNBC) and Microsoft NBC channel (MSNBC).

It is called "the Peacock Network" because of the title animal in its logo.

The network is famous for its three-note chimes, the "Must See TV" phrase and NBC Sunday Night Football, which is the most watched TV series after American Idol.

All content from Kiddle encyclopedia articles (including the article images and facts) can be freely used under Attribution-ShareAlike license, unless stated otherwise. Cite this article:
NBC Facts for Kids. Kiddle Encyclopedia.