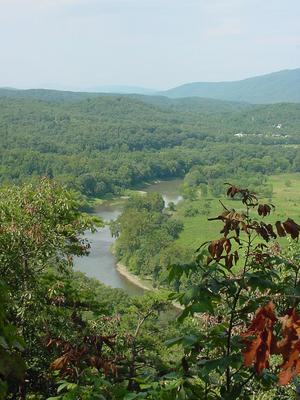 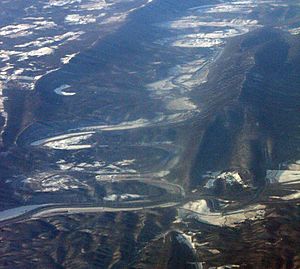 Oblique air photo of the confluence of the North and South Branches near Green Spring, West Virginia. Facing southwest. River Mountain is on the right, and Town Hill is on the left.

Places settled in the South Branch valley bearing variants of "Wappatomaka" include Wappocomo farm built in 1774 and the unincorporated hamlet of Wappocomo (sometimes spelled Wapocomo) at Hanging Rocks, both north of Romney on West Virginia Route 28.

The exact location of the South Branch's source is northwest of Hightown along U.S. Route 250 on the eastern side of Lantz Mountain (3,934 ft) in Highland County. From Hightown, the South Branch is a small meandering stream that flows northeast along Blue Grass Valley Road through the communities of New Hampden and Blue Grass. At Forks of Waters, the South Branch joins with Strait Creek and flows north across the Virginia/West Virginia border into Pendleton County.

The river then travels on a northeastern course along the western side of Jack Mountain (4,045 ft), followed by Sandy Ridge (2,297 ft) along U.S. Route 220. North of the confluence of the South Branch with Smith Creek, the river flows along Town Mountain (2,848 ft) around Franklin at the junction of U.S. Route 220 and U.S. Route 33. After Franklin, the South Branch continues north through the Monongahela National Forest to Upper Tract where it joins with three sizeable streams: Reeds Creek, Mill Run, and Deer Run. 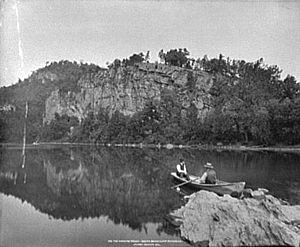 Canoers at Hanging Rocks on the South Branch in the 1890s

In its eastern course from Petersburg into Hardy County, the South Branch becomes more navigable allowing for canoes and smaller river vessels. The river splits and forms a series of large islands while it heads northeast to Moorefield. At Moorefield, the South Branch is joined by the South Fork South Branch Potomac River and runs north to Old Fields where it is fed by Anderson Run and Stony Run.

At McNeill, the South Branch flows into the Trough where it is bound to its west by Mill Creek Mountain (2,119 ft) and to its east by Sawmill Ridge (1,644 ft). This area is the habitat to bald eagles. The Trough passes into Hampshire County and ends at its confluence with Sawmill Run south of Glebe and Sector.

The South Branch continues north parallel to South Branch River Road (County Route 8) toward Romney with a number of historic plantation farms adjoining it. En route to Romney, the river is fed by Buffalo Run, Mill Run, McDowell Run, and Mill Creek at Vanderlip. The South Branch is traversed by the Northwestern Turnpike (U.S. Route 50) and joined by Sulphur Spring Run where it forms Valley View Island to the west of town.

Flowing north of Romney, the river still follows the eastern side of Mill Creek Mountain until it creates a horseshoe bend at Wappocomo's Hanging Rocks around the George W. Washington plantation, Ridgedale. To the west of Three Churches on the western side of South Branch Mountain, 3,028 feet (923 m), the South Branch creates a series of bends and flows to the northeast by Springfield through Blue's Ford. After two additional horseshoe bends (meanders), the South Branch flows under the old Baltimore and Ohio Railroad mainline between Green Spring and South Branch Depot, and joins the North Branch to form the Potomac. 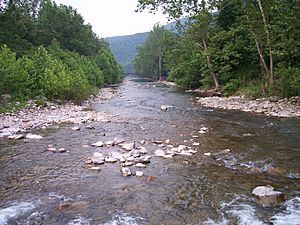 All content from Kiddle encyclopedia articles (including the article images and facts) can be freely used under Attribution-ShareAlike license, unless stated otherwise. Cite this article:
South Branch Potomac River Facts for Kids. Kiddle Encyclopedia.