Ober Gatlinburg is an amusement park and ski area, located in the mountains overlooking Gatlinburg, Tennessee, USA. Established in 1962, the area contains a large mall with indoor amusements, an indoor ice skating rink including new ice bumper cars, snack bars, a full-service lounge, restaurant, and gift and clothing stores. Outside there is an alpine slide, the ski mountain coaster, a chair swing, a maze, mini golf, a scenic chairlift to the top of Mount Harrison, kiddie rides, water raft rides (summer only) and a new rock climbing wall. What was formerly known as the Black Bear Habitat where visitors could see bears close-up, recently expanded to become the Wildlife Encounter, where in addition to the black bears there are animals native to the Great Smoky Mountains such as North American river otters, bobcats, birds of prey, opossums, raccoons, turtles, snakes, and flying squirrels. An aerial tram connects Ober Gatlinburg to downtown Gatlinburg, about 3 miles to the east. 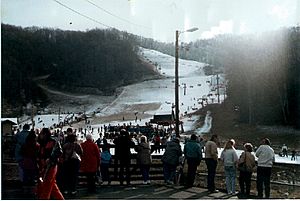 Ober Gatlinburg has ten skiing trails, a terrain park and three chairlifts. It is a very popular winter ski area (being one of the few in the Southeast U.S. and the only one in Tennessee.) As it is too far south to depend on enough natural snow for snowsports, Ober Gatlinburg is equipped with 100% (all 10 slopes) snow making capability (at 28 degrees or lower ... Dec, Jan & Feb).

A multi-lane snow tubing hill opened during the 2008-2009 ski season, where riders can slide down snow chutes on inflatable snow tubes. The lanes are approximately 400 feet (122 m) long with a 50 feet (15 m) vertical drop. The tubing hill is serviced by an outdoor escalator called "The Magic Carpet" ... no hill climbing involved. 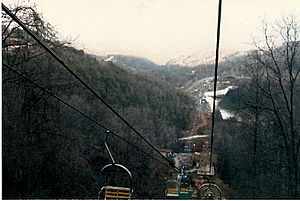 The scenic chairlift is $7 per person to ride, and the weight capacity on the lift is 600 pounds (272 kg). The total ride lasts about 30 minutes. Riders can either get off halfway and ride the alpine slide down, or go all the way up. The unique ride runs up into the virtually untouched summit of the mountain and at the top, there is a scenic overlook to take pictures and listen to a live band playing bluegrass music.

The aerial tramway departs from downtown Gatlinburg and travels west to the resort. There are two 120-passenger cabins, replaced by Doppelmayr in 2007. The 2.1 miles (3.4 km) tram ride runs 17 miles per hour (27 km/h) and takes about 10 minutes, and has views of the mountains in the daytime and the sparkling lights of Gatlinburg, Pigeon Forge, and beyond at night. The tramway crosses the Gatlinburg Bypass, a road which connects around the north and west side of the town and provides an alternate route of U.S. 441 (Great Smoky Mountains Parkway, or just "Parkway", which is the main street through town). The road is part of adjacent Great Smoky Mountains National Park.

All content from Kiddle encyclopedia articles (including the article images and facts) can be freely used under Attribution-ShareAlike license, unless stated otherwise. Cite this article:
Ober Gatlinburg Facts for Kids. Kiddle Encyclopedia.