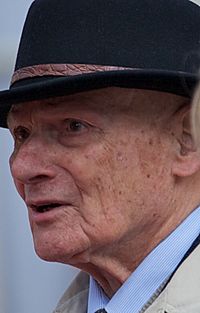 Pierre Adrien Simonet (27 October 1921 – 5 November 2020) was a French militant and senior official. He was with the Free French Forces before becoming a colonial administrator and international official. He was born in Hanoi, French Indochina.

Simonet's brigade was engaged in the Second Battle of El Alamein in October 1942, aiding the Eighth Army in the Tunisian campaign against the Afrika Korps, led by Erwin Rommel.

On 18 June 1945, following the Liberation of Paris and Victory in Europe Day, he piloted one of the three Piper Cubs which passed under the Eiffel Tower.

All content from Kiddle encyclopedia articles (including the article images and facts) can be freely used under Attribution-ShareAlike license, unless stated otherwise. Cite this article:
Pierre Simonet Facts for Kids. Kiddle Encyclopedia.