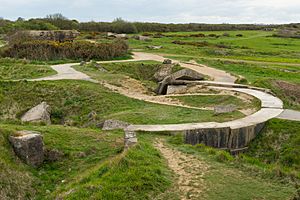 Pointe du Hoc is on the coast of Normandy in the north of France. In 1944 it was part of the biggest sea invasion in history. During World War II, Allied military commanders were planning how to attack France, which had been captured by the Nazis. While planning, the Allied commanders noticed the massive coastal guns at Pointe du Hoc. There were six 155mm cannons in heavily armoured bunkers that could be very dangerous to Allied ships.

Allied planes, flying from English airstrips, bombed Pointe du Hoc. However, the heavy artillery guns at Pointe du Hoc were moved and there was no damage inflicted to them.

Pointe du Hoc was surrounded by steep cliffs that dropped down into the sea. A very narrow beach would appear at the bottom of the cliffs, but only at a certain part of the day. For about five months, the U.S. Rangers had been training with British commandos to prepare for their attack on France. They had been climbing British coastal cliffs for training.

Once the Allied commanders decided to attack France, they used flat-bottomed landing boats made to carry troops onto the beach at the French coastal cliffs. These special landing boats were called LCA and LCVP's or Higgins boats, and were driven British navy sailors. The boats were lowered into the sea a few kilometers away from the cliffs. The British had added some extra armour to the sides of the landing crafts to protect them. This meant that the boats were better protected, but not as fast or easily moved in different directions.

The nearly 100m high cliff at Pointe du Hoc was attacked by the American 2nd and 5th Army Ranger Divisions. Colonel James Earl Rudder led the attack. The attack started at 06.30am, when the battleship USS Texas stopped bombarding Pointe du Hoc. Due to bad weather, the Rangers drifted off course and spent an extra half hour reaching the beach. By then, the Germans had come out of their bunkers and set up defensive positions along the ridge of the cliff. 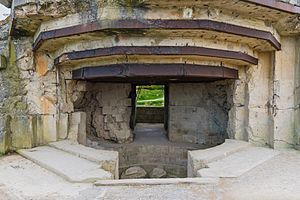 When the Rangers reached the top of the cliffs, small groups of soldiers attacked the German positions. After reaching the German bunkers, where the Germans' guns were, the Rangers found that the guns were no longer there. Than the rangers were forced inland in witch they searched for the guns once they found the guns they used thermite fire grenades to melt important parts of the guns.

Out of 225 soliders onley 90 were able to fight when reinforcements came.

All content from Kiddle encyclopedia articles (including the article images and facts) can be freely used under Attribution-ShareAlike license, unless stated otherwise. Cite this article:
Pointe du Hoc Facts for Kids. Kiddle Encyclopedia.