Politics of the Netherlands facts for kids 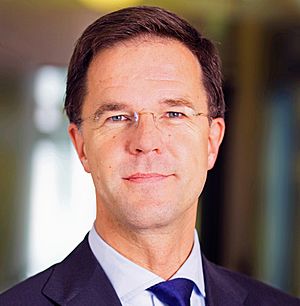 The politics of the Netherlands is that of an indirect democracy. It has a constitution and a monarchy that operates within the constitution. The democratic structure is determined by a parliament (the legislative branch) and a government (the executive branch). The government depends on the confidence of the parliament, but the two branches aren't strictly separated (the parliamentary system).

The parliament is called the States General (Dutch: Staten-Generaal) and consists of two chambers: a lower house, the so-called Second Chamber (Dutch: Tweede Kamer), comparable with the House of Representatives in other countries, and a upper house, the so-called First Chamber (Dutch: Eerste Kamer), comparable with the Senate in other countries, and often called likewise.

At a lower level, there are provinces, municipalities and water boards.

On a higher level, the Netherlands makes part of the Benelux, Council of Europe, European Union, NATO and the United Nations.

The Third Rutte Cabinet was established on October 26, 2017. Prime Minister has been VVD politician Mark Rutte since 2010.

The following 14 political parties are in parliament:

No more in parliament:

Political leaders since 2021, sorted by the number of seats in parliament.

All content from Kiddle encyclopedia articles (including the article images and facts) can be freely used under Attribution-ShareAlike license, unless stated otherwise. Cite this article:
Politics of the Netherlands Facts for Kids. Kiddle Encyclopedia.