Questa is a village in Taos County, New Mexico, United States. The population was 1,767 at the 2000 census. Questa is renowned for the beautiful scenery surrounding the small, historic village. The Village offers rare trails into the Rio Grande Gorge, trout fishing for every skill level, and mountain lakes with trails that access the highest reaches of the Sangre de Cristo Mountains overlooking the area. In addition to famously serene camping and stunning hikes, there are many choices for cycling, mountain biking and horseback excursions. Located on the Enchanted Circle Scenic Byway, near the confluence of the Rio Grande and the Red River, Questa offers scenic and serene activities in the protected natural environment surrounding the Village. As the Gateway to the Rio Grande del Norte Monument visitors can enjoy a scenic drive to a stunning overlook of the Red River meeting the Rio Grande in the depth of the Gorge. The Carson National Forest parallels Questa to the east offering high mountain hiking, picnicking, camping and biking. The Columbine Hondo Wilderness and Latir Peak Wildness are found in the Carson National Forest close to Questa. The Red River is undergoing restoration to improve trout habitat with currently a section parallel to Eagle Rock Lake complete.

The Historic San Antonio del Rio Colorado Church in the historic plaza of Questa symbolizing the cultural heart of Questa since the mid-1800s. After suffering a collapse of the west wall in Questa’s historic church the community came together and many of the families that built the church originally are restoring it modern day. Made with beautiful adobe and wood work it was scheduled to be completed mid-2016. The Historic church is open free to the public and anyone of any faith or not of a faith is welcome to come see the jewel of Questa.

With a large Hispanic population, the village economy was historically largely dependent on agriculture and income from a now-closed Chevron molybdenum mine. Many residents also commute to Taos, Red River, and Angel Fire to work in the hospitality industries there.

According to the United States Census Bureau, the village has a total area of 5.1 square miles (13.2 km²), all land. The village is a regional hub for the smaller outlying communities of Lama, Cerro, Sunshine Valley, Latir, Costilla, and Amalia. Questa is surrounded by the Rio Grande del Norte National Monument to the west and the Carson National Forest to the East.

Questa lies at the western base of the Taos Mountains, part of the Sangre de Cristo Mountains. Rising above the town to the northeast is the Latir Peak massif, headed by Venado Peak, 12,734 ft (3,881 m); Pinabete Peak, a southwestern outlier of the group, rises closest to Questa. To the southeast lies Flag Mountain, a northwestern spur of the group of mountains that includes Wheeler Peak, the highest peak in New Mexico. To the north and west lie the Rio Grande Gorge, cutting a volcanic plateau dotted with several peaks of volcanic origin in the Rio Grande del Norte National Monument. 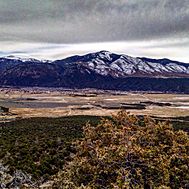 Questa was originally named San Antonio del Rio Colorado. Later, a U.S. postmaster changed its name to Questa. The postmaster misspelled the name — according to Spanish spelling rules, it should have been spelled Cuesta, which was derived from the Spanish for "ridge" or "slope." Despite the error, the village has kept the name.

The village of Questa is located close to the ancient Kiowa trail, a Native American trade route which connected the Ute, Kiowa, and Comanche tribes to the north with the Pueblo tribes to the south. Evidence of this route can be seen in trail remnants, artifacts, and petroglyphs along the western slopes of the Sangre de Cristo Mountains (Rael and Cuddihy, 2003). The first Hispanic visitor to the area may have been Francisco Vásquez de Coronado; certainly the area was known to the Spanish by 1593, when the gold-seekers Juan Humana and Francisco Borilla were killed by tribes along the Purgatoire River.

Mining activity in the area, including the apocryphal Governor's mine (NM Bureau of Geology and Mineral Resources, RM-21), probably began around that time, and continued until the Pueblo Revolt of 1680. The use of forced labor in gold mining is often cited as the cause of the revolt, but records of that time are incomplete, and the locations of these mines are lost. Candidates for "Lost Spanish Gold Mines" are frequently proposed in the Sangre de Cristo, San Juan, and Ortiz Mountains; few have been verified.

After the Pueblo Revolt, Spanish occupation was slow to return to the Questa area due to repeated clashes with Taos and Ute warriors; although reports of trading and military activity in the area, especially by French, French-Canadian, and even English fur traders, the actual date of establishment of a permanent settlement in the area is recorded as 1820 (Rael and Cuddihy, 2003).

Even then, the threat of Indian raids was considerable. The location of the incipient village at the confluence of the rivers, and astride the ancient trade, raiding, and hunting routes, made resource-based conflict between cultures inevitable. Additionally, the village location blocked access to certain historic clay and pigment quarries of great ceremonial importance to the Taos tribe. This continued conflict lead to the village being repeatedly abandoned. Spanish, Mexican, and eventually American soldiers detailed to defend the beleaguered settlement frequently expressed great frustration with their posting (Rael and Cuddihy, 2003). 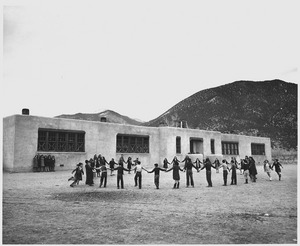 The names of two prominent peaks overlooking the village of Questa, Flag Mountain and Sentinel Peak, refer to the practice, during this period, of stationing watchmen on these high points to warn the village of approaching war parties.

The village, nearly from the beginning, was of mixed blood; the surnames Lafore or Laforet, Ledoux, and LaCome reflect the names of French or French-Canadian trappers who settled in the area after arriving in search of otter and beaver. New Mexico territory license records list Auguste Lacome as residing in the area as a trader with the surrounding Native Americans. The common surname Rael may also reflect the influence of Jewish immigrants arriving after being expelled from Spain. The village had a reputation for being contentious and requiring disproportionate effort to police; records show that viceregal intervention was frequently required to settle property disputes (Rael and Cuddihy, 2003). 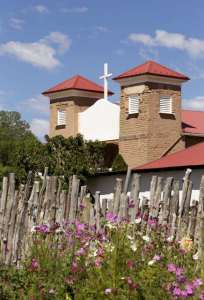 The Historic San Antonio del Rio Colorado Church is found in the historic plaza of Questa. The San Antonio del Rio Colorado Church services as a cultural heart to Questa, present since the mid-1800s. After suffering a collapse of the west wall in Questa’s historic church the community came together and many of the families that built the church originally are restoring it modern day. Made with beautiful adobe and wood work it was scheduled to be completed mid-2016. The Historic church is open free to the public of any faith or not of faith to come see the jewel of Questa.

Surrounding Questa are the Rio Grande del Norte National Monument and the Carson National Forest offering hiking, fishing, camping, and picnicking. Right beside Questa's Village limits is the Eagle Rock Lake a scenic walking and fishing location around a lake bordered by the Red River, and right up against mountains. The Red River is currently undergoing restoration to improve trout habitat with the section parallel to Eagle Rock Lake complete. Questa has OCHO an Art Galley and Event Space featuring shows and events throughout the year, local art shops, and a prolific thrift shop. Several eateries are located in and around the village. Wildcats Den is a local favorite for decades famous for their green Chili Cheeseburger. Tia's Cafe, a Mexican cafe, is located on route to the Rio Grande del Norte National Monument. Bo's Place is a family style restaurant with Lainey’s Licks an ice-cream palor in the front on the building.The

Questa has two local parks: the Municipal Park and the Moly Park. The Municipal Park is relatively new and is a product of the hard work done by local students. Right by the Questa Library the park and playground it is open to all age ranges. The Moly Park contains public athletic fields.

Outside and extremely near Questa is the surrounding Rio Gande del Norte National Monument and Carson National Forest. Within the National Forest is Eagle Rock Lake right next to Village limits featuring a walking loop, fishing, and picnicking. The Cabresto Lake features hiking trails, swimming, fishing, canoeing, picnicking, and camping. The trails from Cabresto Lake lead to mountain top lakes in the Latir Peaks Wilderness. In the Rio Grande del Norte National Monument hiking trails, fishing, picnicking, and camping are found. On the Monument two popular locations: the La Junta Overlook where the Rio Grande and the Red River come together over 800 feet below and the Big Arsenic Trail containing Petroglyphs and a natural spring.

There were 741 households out of which 35.6% had children under the age of 18 living with them, 49.3% were married couples living together, 13.8% had a female householder with no husband present, and 30.8% were non-families. 26.5% of all households were made up of individuals and 9.9% had someone living alone who was 65 years of age or older. The average household size was 2.52 and the average family size was 3.02.

All content from Kiddle encyclopedia articles (including the article images and facts) can be freely used under Attribution-ShareAlike license, unless stated otherwise. Cite this article:
Questa, New Mexico Facts for Kids. Kiddle Encyclopedia.