Stone Age tools have been found in several areas of Orpington, including Goddington Park, Priory Gardens, the Ramsden estate, and Poverest. Early Bronze Age pottery fragments have been found in the Park Avenue area. During the building of Ramsden Boys School in 1956, the remains of an Iron Age farmstead were excavated. The area was occupied in Roman times, as shown by Crofton Roman Villa and the Roman bath-house at Fordcroft. During the Anglo-Saxon period, Fordcroft Anglo-Saxon cemetery was used in the area. The first record of the name Orpington occurs in 1038, when King Cnut's treasurer Eadsy gave land at "Orpedingetune" to the Monastery of Christ Church at Canterbury. The parish church also pre-dates the Domesday Book. On 22 July 1573, Queen Elizabeth I was entertained at Bark Hart (Orpington Priory) and her horses stabled at the Anchor and Hope Inn (Orpington High Street). On the southern edge of Orpington, Green St Green is recorded as 'Grenstretre', which means a road covered with grass. It is known in the 1800s as Greenstead Green.

Until the railway came, the local commercial centre was nearby St Mary Cray, rather than Orpington. St Mary Cray had a regular market, and industry (paper mills and bell foundry), whereas Orpington was just a small country village surrounded by soft fruit farms, hop fields and orchards.

These crops attracted Romani people, working as itinerant pickers, to annual camps in local meadows and worked-out chalk pits. This work has largely ended, but the Borough still provides a permanent site at Star Lane, and the gatherings are commemorated in local street names, such as Romany Rise. In 1967, Eric Lubbock, then Liberal MP for Orpington, promoted a Private Member's Bill to provide permanent Gypsy sites; this resulted in the Caravan Sites Act 1968 that placed an obligation upon local authorities to provide sites for locally residing travellers. In 1971, an international meeting of Romany people was held at Orpington; this Orpington Congress marked the founding of the International Romani Union, a group seeking political representation for Romanis throughout Europe.

2011 census data reports that the population of Orpington is 15,311 with 52% being female leaving 48% male. The average age is 42, slightly above the national average age of 40. 86% of Orpington's population was born in England, second is Scotland with 1.1%. 95.1% of Orpington's population speak English, second is all other Chinese with just 0.4%. Christianity is the prominent religion in Orpington with 63.1% of the population identifying as Christian, no religion was second with 24.4% and Muslim third at 2.1%. Notably 45 people identify as Jedi Knight and 5 Heavy Metal as their religion. 51.1% of the local population is married, 23.8% are single, 8.2% cohabit with a partner of the opposite sex and 0.5% cohabit with a partner of the same sex. The leading occupation is professionals who make up 19.2% of the population followed by administrative and secretarial at 16.2%.

After the Conservative member for the Orpington constituency, Donald Sumner, had resigned to become a county court judge, a by-election was held on 15 March 1962. Orpington was considered a safe Conservative seat, but Eric Lubbock, the Liberal candidate, won with a 22% swing away from the Conservatives. The result caused a sensation and was headline news across the nation. It is from this win that the revival of the Liberal Party is usually dated.

The Walnuts Leisure Centre, just east of the High Street, has a six-lane, 33.3 metre indoor swimming pool, squash courts and a gym with sauna and steam room, as well as a sports hall used for activities such as badminton, basketball, trampolining and fitness classes. The sports hall is also used for Women's Artistic Gymnastics, and is the training venue for Orpington Gymnastic Club.

The Walnuts has been home to the Orpington Ojays swimming club for nearly 40 years. The club caters for those learning to swim right through to elite swimmers who wish to swim competitively at county and national level. 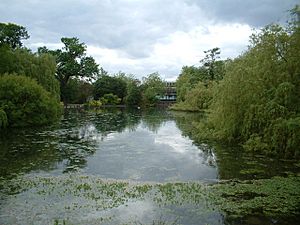 The pond at Priory Gardens is the source of the River Cray.

There are also other leisure centres such as one situated at the Priory School, which has a floodlit, synthetic pitch for hockey and football, three outdoor tennis courts, two netball courts, four outdoor cricket nets and a sports hall with gymnasium/fitness suite and dance studio. Another is Pure Gym, a members-only health club on Sandy Lane which was previously LA Fitness but changed causing controversy in late 2015. Other exercise facilities include bodybuilding gym Ripped Muscle And Fitness located on Orpington highstreet, Keddles Gym, Jack Watson's martial arts club, and Anytime fitness which can be found on Orpington highstreet.

There are rugby, football, tennis and cricket pitches in Goddington Park which are used by Westcombe Park RFC, Orpington Cricket Club and Orpington Football Club. Westcombe Park RFC competes in National League 3 London & SE (four leagues below premiership rugby). 'Combe' moved from the Blackheath area to Orpington in 1936. Cray Wanderers F.C., established in 1860 no longer plays in Orpington, but now shares a ground with Bromley F.C. On 3 October 2014 Cray Wanderers signed a conditional contract to purchase Flamingo Park Sports Centre on the A20 Sidcup bypass. The club subsequently obtained planning permission from Bromley Council for a new sporting community hub, featuring a new multi-sport stadium with a spectator capacity of 2,200. But in July 2016 new London Mayor Sadiq Kahn vetoed the plan as part of his pledge to protect green belt land. The plan will now be heard by the Secretary of State for Communities and Local Government in order to give a final ruling on a new ground for Cray Wanderers.

Since 1985, members of Orpington Road Runners have met every Tuesday near The Buff Pub and on Sundays at High Elms Country Park. For over 10 years, the Club has organised a 10k race and series of 2k fun runs during the summer in conjunction with Darrick Wood School. Bromley Indoor Bowls Club is situated off Gillmans Road. Lawn bowls is played at the Excelsior Club in Poverest Recreation Ground. Knoll Lawn Tennis Club has (despite its name) five tarmac courts tucked away among the houses of Mayfield Avenue and Lynwood Grove. Bromley Tennis Centre (six indoor courts and four floodlit outdoor courts) is in the grounds of Newstead Wood School.

Construction work on a new cinema complex at The Walnuts Centre commenced in 2014; the seven screen Odeon Cinema opened on 26 February 2016. Orpington was without a cinema since 1982, when the old Commodore cinema closed.

Orpington railway station is a transport hub served by Southeastern with trains to Central London stations Charing Cross and Cannon Street via Grove Park, as well as Victoria via Bromley South and Herne Hill. Outside Greater London, services call at Sevenoaks, Tunbridge Wells and Hastings.

The M25 ring-road around London passes Orpington to the south of the town and three A roads, the A208, A224 and A232 pass through the area. Additionally the A21 passes along the town's southern border.

The Parish Church is All Saints Church which stands upon pre-Norman foundations. Mentioned in the Domesday Book, it is Early English in style, but some Saxon work is visible. It was endowed by the Archbishop of Canterbury in 1173. The tower and steeple were damaged by a storm in 1771. The rebuilt steeple was struck by lightning in 1809, and it was not replaced. The church was greatly enlarged in 1957. The present Vicar is the Reverend Brian McHenry. 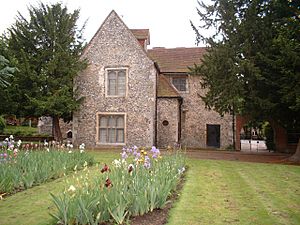 The Priory is a medieval hall house. In 1032, Eadsy, chaplain to King Cnut, gave his estate at Orpedingetune to Christ Church Priory, Canterbury. The first Rector of Orpington, Hugh de Mortimer, held court here in 1270. The house was rebuilt in 1290, this time in stone, and extended in 1393 and 1471. In the 17th century the house ceased to be a rectory and passed into private ownership; a timber-framed extension was added, which no longer exists. The house was acquired by Orpington Urban District Council in 1947, and used to house a museum, closed in September 2015 after more than 50 years for cost reasons. The garden forms an attractive public park, and contains a natural pond which is the source of the River Cray. Each year the Orpington May Queen is crowned in the gardens.

During the First World War a large military hospital, the "16th Canadian General", was built south-east of the station, funded by the government of Ontario, Canada. It originally accommodated 1,050 patients; an extra wing was added in 1917. By January 1919, more than 15,000 wounded soldiers had been treated here. Most of the original pre-fabricated buildings remained in use for more than 80 years before a major renovation around the turn of the century. Today Orpington Hospital provides rehabilitation and therapy services, outpatient and diagnostic services (including dermatology and diabetes), but it no longer has an Accident and Emergency Unit. The nearest A&E is Queen Mary's, Sidcup, or Princess Royal University Hospital, Farnborough.

Orpington War Memorial standing at the end of the Highstreet is a focal point for Remembrance Sunday.

It was designed by local architect Charles Heaton Comyn and unveiled on Sunday 28 August 1921. It originally contained the names of 111 local men who died in the Great War however further names were added later bringing the total for the Great War up to 117.

A campaign in 1997–98 for the remembrance of 432 armed forces personnel who fell in the Second World War resulted in the unveiling of eight more plaques on Sunday 2 August 1999.

Another new plaque has been added detailing the eight local men who have died on active duty since 1945. 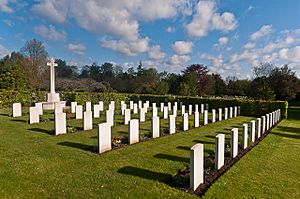 The Memorial Cross which stands in Canadian Corner

In the corner of All Saints' Church sits Canadian Corner. This is a First World War memorial which marks where 182 soldiers who died being treated at Orpington Hospital are buried. The name derives from the fact 88 of those buried are Canadians. Canadian Corner is unique of other memorials in that its design resembles that of First World War Cemeteries found in France & Belgium with the text on the memorial suggesting the Memorial Cross to be the first outside of the Western Front as the English public were interested in how the war cemeteries looked. The Memorial Cross in Canadian Corner was unveiled in 1921 in the presence of the High Commissioner for Canada. The automatic plunger used to release the Union flag which hid the Cross was the same used by King George the Fifth during the unveiling of the The Cenotaph a year earlier. The Memorial Cross in Canadian Corner was the first Canadian Memorial unveiled in the UK.

Orpington is known for the "Buff", "Black" and "Speckled" chickens bred locally by William Cook in the 1890s. One could see the Buff Orpington at Tripes Farm, Chelsfield Lane until the late 1990s, when the chicken coop was removed from the farm. Buff Orpington Ducks were also developed by Cook.

The Orpington Car, designed by Frank Smith and built by Smith & Milroy Ltd at their works in Wellington Road, was shown at the 1920 Motor Show. It was a two-seater convertible, with a dickey seat, and a 10 horsepower (7.5 kW) engine. Although briefly successful, Smith and Milroy could not compete with mass production, and the last car was commonly believed to have been built in 1925. The only known survivor at the time reportedly once appeared in the 1970s television series Crossroads, but this has not been substantiated. There are now no known surviving examples in existence.

Journalists in the 1960s used "Orpington man" to designate a typical member of the lower middle class, for example as the target audience of an electoral or advertising appeal.

Orpington is 13.2 miles (21.2 km) south-east of Charing Cross which forms an important link between Orpington and Central London due to daily train services between Charing Cross Station and Orpington Station. Orpington is a part of the BR postcode area consisting of the BR6 district.

"Rediscovering... The Orpington Car" by Trevor Mulligan. A 100+ page A5 definitive guide, published 2012.

All content from Kiddle encyclopedia articles (including the article images and facts) can be freely used under Attribution-ShareAlike license, unless stated otherwise. Cite this article:
Orpington Facts for Kids. Kiddle Encyclopedia.