Rattling Run is a tributary of Little Mahanoy Creek in Schuylkill County, Pennsylvania, in the United States. It is approximately 2.3 miles (3.7 km) long and flows through Butler Township and Gordon. The watershed of the stream has an area of 2.75 square miles (7.1 km2). The stream is not designated as an impaired waterbody and is several miles from the Western Middle Anthracite Field. The Gordon Reservoir is located within its watershed. The watershed of Rattling Run is a Coldwater Fishery and a Migratory Fishery. 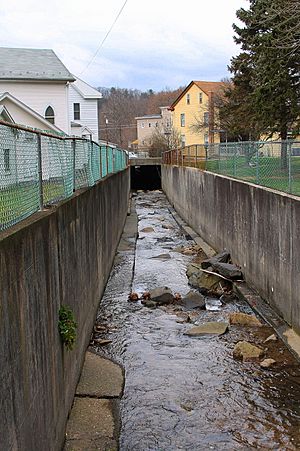 Rattling Run is a few miles to the south of the Western Middle Anthracite Field. The stream has experienced some erosion along the sides and bottom of its channel.

The watershed of Rattling Run has an area of 2.75 square miles (7.1 km2). The mouth of the stream is in the United States Geological Survey quadrangle of Ashland. However, its source is in the quadrangle of Minersville.

A reservoir known as the Gordon Reservoir is on Rattling Run. In 1970, it was owned by the Butler Township Water Company.

The designated use for Rattling Run is aquatic life.

Rattling Run flooded during Hurricane Agnes in April 1972, causing $350,000 in damage and significant damage to nearby structures.

Rattling Run was stocked with 1000 adult and yearling rainbow trout at least once in the early 1900s. Improvements were made to the stream in 1937. Flood control proposals for Rattling Run in Gordon were made in 1976.

A steel culvert bridge carrying Gordon Mountain Road over Rattling Run was built in 1959 and is 24.0 feet (7.3 m) long.

In June 1991, it was reported that raw sewage was being piped from homes directly into Rattling Run and Little Mahanoy Creek.

In 2001, neither fish nor macroinvertebrates were observed in Rattling Run at Gordon. The stream is classified as a Coldwater Fishery and a Migratory Fishery.

All content from Kiddle encyclopedia articles (including the article images and facts) can be freely used under Attribution-ShareAlike license, unless stated otherwise. Cite this article:
Rattling Run (Little Mahanoy Creek tributary) Facts for Kids. Kiddle Encyclopedia.