Simeon I of Bulgaria facts for kids

He was 27 when he took the throne from his brother Vladimir who was deposed and possibly blinded by his own father, Tsar Boris I, after a possible attempt to return Bulgaria to paganism. One of the first decisions which he took after taking over the throne was to move the capital of Bulgaria from Pliska to Preslav. 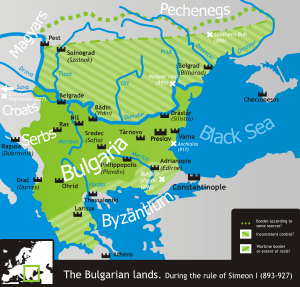 Bulgaria during the reign of Tsar Simeon

According to the Langobard chronicler Liudprand of Cremona, Simeon had spent much of his youth in Constantinople, where he gained access to the best possible education. Two letters by Simeon, addressed to the Byzantine diplomat Leo Choerosphaktos, have been preserved. Together with his correspondence with the Patriarch of Constantinople Nicholas I Mystikos and the Byzantine Emperor Romanos I Lekapenos (r. 920-944), they testify to Simeon's unusual sophistication and knowledge of Byzantine political, institutional and intellectual traditions. Both Liudprand and Nicholas Mystikos attest to Simeon having taken the monastic vows, and modern scholars presume Boris I wanted to see him at the head of the Bulgarian Church. The fall of his elder brother, however, prompted him to the throne. To break away from Byzantine religious influence, Simeon sponsored the replacement of the Greek liturgy with Slavonic, even if bilingual inscriptions testify that Greek continued to be used until at least the middle of the tenth century. It is very plausible that Simeon encouraged the use of the newly developed Cyrillic alphabet (at the expense of the Glagolitic) which made the Slavonic language (or Old Bulgarian) much more easily applicable in administration, literature and liturgy. Under the supervision of Simeon and thanks to his lavish sponsorship, Old Church Slavonic literature flourished — to the extent that the enormous bulk of texts circulating during later centuries in the Russian lands go back to Simeon's time. The literary life, concentrated around the cities of Preslav and Ohrid, in Macedonia, included both large-scale translation of Greek works in exegesis, hagiography, rhetoric, chronography and original works written in Old Bulgarian. This was the Golden Age of the medieval Bulgarian culture whose most enduring consequence was the establishment of the Cyrillic alphabet — based on the Greek alphabet, but supplemented with Glagolitic or newly created letters. Slavonic literature became the third major literature in the Christian world while Slavonic liturgy spread throughout most of Eastern Europe.

In 893, the Byzantine Emperor Leo VI decided to move the market for Bulgarian goods out of Constantinople to Thessaloniki. This coincided in time with the first major Magyar attacks on Bulgaria and resulted in a major, three-way conflict in which Bulgarians and Pechenegs defeated Byzantines and Magyars. The war was concluded in 896 with a great Bulgarian victory in the battle of Bulgarophygon in Eastern Thrace. The market was returned to Constantinople and the Byzantine Emperor had to resume the payment of annual tribute to Bulgaria.

Later, Simeon claimed the imperial title and tried to replace Byzantium as the biggest power in the region. In 913, he invaded Thrace and, unimpeded, stationed his army at the gates of Constantinople. It is a matter of huge scholarly debates whether, at that moment, Simeon was crowned by the Byzantine patriarch as emperor, although his later correspondence and preserved seals testify that he considered himself "Emperor of the Bulgars and the Romans". Simeon led aggressive policy regarding the Serbian principalities, continuously invaded the country and imposed his choice of prince. On August 20, 917 an extraordinarily large Byzantine force invaded Bulgaria, but suffered a heavy defeat at the Battle of Anchialus. As a result, Simeon drew into his orbit the Pechenegs and started a major offensive against the European dominions of Byzantium. He allegedly even tried to negotiate an anti-Byzantine coalition with the Fatimid ruler in Egypt, yet his ambition to be recognized as Emperor by the Byzantines remained vain. By 926, he was in war with Croatia under King Tomislav, but suffered a defeat in the Battle of the Bosnian Highlands. Simeon died on May 27, 927, after 14 years of war against the Byzantine Empire.

All content from Kiddle encyclopedia articles (including the article images and facts) can be freely used under Attribution-ShareAlike license, unless stated otherwise. Cite this article:
Simeon I of Bulgaria Facts for Kids. Kiddle Encyclopedia.