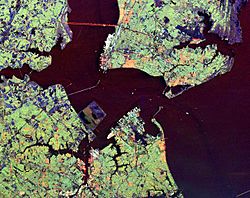 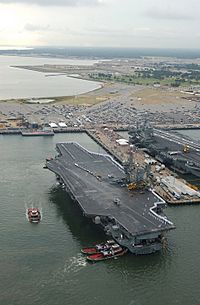 South Hampton Roads is a region of the U.S. state of Virginia. It in the most southeastern part of the state. The area is part of the Virginia Beach-Norfolk-Newport News, VA-NC MSA (Metropolitan Statistical Area). About 1.7 million people live there.

As of the 2010 Census, the Hampton Roads MSA is the fifth largest metropolitan area by size in the southeastern United States. It is the second-largest between Washington, D.C. and Atlanta, Georgia.

The decision to call the region "Hampton Roads" was a political one. The area was called "Tidewater" for many years by the people who lived there. The local baseball team was called the Tidewater Tides for years. It is now called the Norfolk Tides. When they first came to Tidewater, they used the popular name to draw more fans. 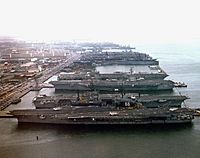 Aircraft carriers at the pier at Naval Station Norfolk

Norfolk Naval Shipyard and Naval Medical Center, Portsmouth are in Portsmouth. They are two very important and historic bases. The shipyard was created as the Gosport Shipyard on November 1, 1767. It had the county's first dry dock. The name was changed after the American Civil War. Although it is in Portsmouth, the name Norfolk was chosen because there was another U.S. Navy shipyard at Portsmouth, New Hampshire. There are also many smaller bases in Portsmouth.

Norfolk is the home of Naval Station Norfolk. It is the main base for United States Navy's Atlantic Fleet. The base was created in 1917. It is the largest naval facility in the world.

St. Julien's Creek Annex is a U.S. Navy base in Chesapeake. It is on the Elizabeth River. It began in 1849. It is currently part of the Norfolk Navy Base. Chesapeake is also home to U.S. Naval Auxiliary Landing Field Fentress. It is used to help support training for NAS Oceana.

From Colonial times through the first 150 years of the United States, South Hampton Roads was almost always changing. Local governments changed mainly because of growth in population. Counties were divided and towns were created as the population grew. Some towns grew to become cities. in 1871, changes were made to the state constitution. One of these changes made all cities in Virginia independent cities of the counties they had been a part of.

In the second half of the 20th century, many city-county-town local government joined together in South Hampton Roads and on the Virginia Peninsula. Many small towns and cities joined together to create a small number of larger cities. Nowhere else in Virginia have rural areas and more dense cities been combined in this way. The changes caused the area to have Virginia's cities with the largest land areas and the most farming.

The following is a listing of these 11 extinct shire, counties, towns, and cities, with the approximate dates they existed:

All content from Kiddle encyclopedia articles (including the article images and facts) can be freely used under Attribution-ShareAlike license, unless stated otherwise. Cite this article:
South Hampton Roads Facts for Kids. Kiddle Encyclopedia.