The South West Slopes is a region predominantly in New South Wales, Australia. It covers the lower inland slopes of the Great Dividing Range extending from north of Cowra through southern NSW into western Victoria. More than 90% of the region is in the state of New South Wales and it occupies about 10% of that state. 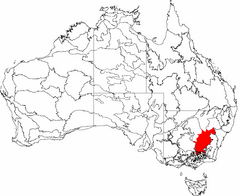 Map of the bioregion

The south western slopes bioregion covers the lower inland slopes of the Great Dividing Range extending from north of Cowra through southern NSW into eastern Victoria. More than 90% of the region is in the state of New South Wales and it occupies about 10% of that state – more than 80,000 km2.

The bioregion includes parts of the Murray, Murrumbidgee, Lachlan and Macquarie River catchments.

The region can be divided into two sub-regions:

Protected areas within the bioregion

The South western Slopes of NSW are some of the most highly cleared and altered lands in the state. Native vegetation remains generally only in small, isolated patches. Substantial clearing continues. Less than 2% of the bioregion is protected as reserves. Conservation efforts are focussing on landholder stewardship agreements.

The South Western Slopes was occupied by the Wiradjuri people, the largest Aboriginal language group in NSW.

An area of 25,653 square kilometres (9,905 sq mi), largely coincident with the bioregion, has been identified by BirdLife International as the South-west Slopes of NSW Important Bird Area (IBA) because it supports a significant wintering population of endangered swift parrots and most of the largest population of vulnerable superb parrots, as well as populations of painted honeyeaters and diamond firetails.

Most of the site is modified wheat-growing and sheep-grazing country with only vestiges of its original vegetation. Remnant patches of woodland and scattered large trees, especially of mugga ironbark, apple box, grey box, white box, yellow box, red box, yellow gum, river red gum and Blakely's red gum, still provide habitat for the parrots. Protected areas within the site include several nature reserves and state forests, as well as the Livingstone and Weddin Mountains National Parks, and Tarcutta Hills Reserve. Mean annual temperatures in the region are mild; ranging from 10 °C (50 °F) to 16 °C (61 °F), with an annual rainfall of 500 millimetres (20 in) – 1,150 millimetres (45 in).

Forecast area for Bureau of Meteorology

The south west slopes forecast area used by the Bureau of Meteorology includes Young and Tumbarumba. The area is smaller than that defined as a bioregion by the NSW National Parks & Wildlife Service.

All content from Kiddle encyclopedia articles (including the article images and facts) can be freely used under Attribution-ShareAlike license, unless stated otherwise. Cite this article:
South West Slopes Facts for Kids. Kiddle Encyclopedia.