Kids Encyclopedia Facts
Not to be confused with the historic parliamentary constituency, Steyning (UK Parliament constituency) or the registration district in Sussex.

Steyning ( STEN-ing) is a town and civil parish in the Horsham District of West Sussex, England. It is located at the north end of the River Adur gap in the South Downs, four miles (6.4 km) north of the coastal town of Shoreham-by-Sea.

The smaller villages of Bramber and Upper Beeding constitute, with Steyning, a built-up area at this crossing-point of the river. 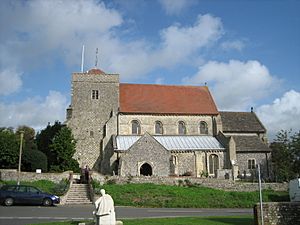 The church of St Andrew and St Cuthman, Steyning

Steyning has existed since Anglo-Saxon times. Legend has it that St. Cuthman built a church, at one time dedicated to him, later to St Andrew, and now jointly to St Andrew and St Cuthman, where he stopped after carrying his mother in a wheelbarrow. Several of the signs that can be seen on entering Steyning bear an image of his feat. King Alfred the Great's father, Ethelwulf of Wessex, was originally buried in that church, before being transferred to Winchester – a Saxon grave slab (possibly his) remains in the church porch.

To thank his Norman protectors for refuge during his exile, Edward the Confessor granted his royal minster church in Steyning, with its large and wealthy manor lands, to the Abbey Church of the Holy Trinity at Fécamp, to take effect after the death of Aelfwine, the Bishop of Winchester, who had charge of Steyning. The bishop died in 1047 and ecclesiastical jurisdiction then passed directly to the Pope. (In the same way, Fécamp Abbey itself answered to no Norman bishop, only to the Pope.) This was confirmed in a charter by William. Confirming the gift of Steyning, made by Edward the Confessor, this charter acquitted the grantees of all earthly service and subjection to barons, princes and others, and gave them all royal liberties, custom and justice over all matters arising in their land, and threatened any who should infringe these liberties with an amercement of £100 of gold. This was an addition to the nearby port with land around Rye, Winchelsea and Hastings, already given to the same Abbey by King Cnut, to honour a promise made by his wife Emma of Normandy's first husband King Aethelred. By then Steyning was already a thriving and important port with a market, a royal mint, the church founded by St Cuthman and one other church, as Domesday Book relates 60 years later. Godwin, Earl of Wessex expelled the Norman monks in 1052 and seized Steyning for himself, and his son Harold decided to keep it upon his accession. This made commercial and strategic sense as Harold did not want a Norman toehold in a potential invasion port, but William responded by swearing on a knife before setting out for England to recover it for the monks:

Of the land of Steyning [county of Sussex]; the Duke gave seisin to the Church by the token of a knife, before he went to England; the grant to take effect if God should give him victory in England. 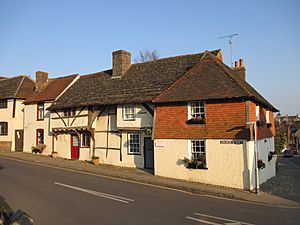 Medieval cottages on the corner of Church Street and High Street

This gained him a ship from Fécamp and, upon his victory at Hastings, he honoured his promise and returned it to the monks. However, its strategic importance made William place William de Braose in a new castle at nearby Bramber, who began a vigorous boundary dispute and power tussle with the monks, William's settlement having lacked definite terms in the first place. Domesday Book, completed in 1086, brought this to a head. It found that de Braose had built a bridge at Bramber and demanded tolls from ships travelling further along the river to the port at Steyning. The monks challenged Bramber's right to bury its parishioners in the churchyard at William de Braose's new church of St. Nicholas, and demanded its burial fees, despite it being built to serve the castle not the town. The monks produced forged documents to defend their position and were unhappy with the failure of their claim on Hastings. In 1086 the king called his sons, barons and bishops to court (the last time an English king presided personally, with his full court, to decide a matter of law) to settle this. It took a full day, and the Abbey won over the court, forcing de Braose to curtail his bridge tolls, give up various encroachments onto the abbey's lands and organise a mass exhumation and transfer of all Bramber's dead to the churchyard of Saint Cuthman's Church in Steyning. 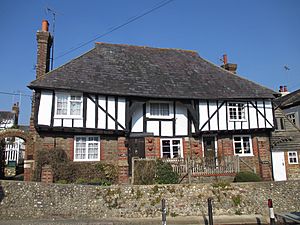 Even the 1086 judgment did not settle the Steyning versus Bramber dispute once and for all; it continued for centuries afterwards, exacerbated by the Lord of Bramber founding his own religious establishments in his neighbouring parish. Meanwhile, in the 14th century, the River Adur began to silt up and the town's use as a port became difficult leading to a loss of trade and population. The monks of Fécamp Abbey retained control of Steyning until the 15th century, and re-dedicated the church of St Cuthman to St Andrew in the 13th century.

Steyning began returning two members of parliament from 1278 and as a rotten borough made up of a depopulated port became similar to Dunwich until the Reform Act 1832. 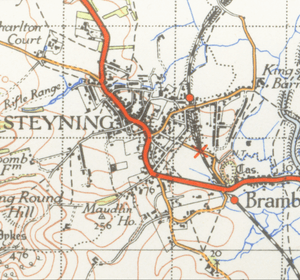 The Steyning Line railway from London to Shoreham arrived in Steyning in 1861 and a station was opened to serve the town, see the black line and station in the map displayed.

Steyning Town Hall, (currently an estate agents) at 38 High Street, was built in 1886.

Besides much agriculture, brewing, a tannery (Tanyard Lane) and to a small extent brickmaking, more than 25 men were employed in the sheep related trade as fellmongers, more than four were parchment makers, five were millers and there was a surgeon, an oil painter, James M. Burfield, and a watch maker in the town during the 1881 census.

The railway remained in service for over a century, closing in 1966 as result of the Beeching Axe. The route of the railway line has since been converted into a footpath and cycleway known as the Downs Link. The nearest railway station to the town today is Shoreham-by-Sea 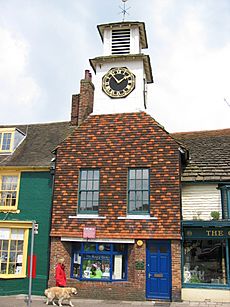 In Steyning there is access to a variety of facilities including four public houses, the award winning Steyning Tea Rooms, four estate agents and three banks. There is a leisure centre, which was built with National Lottery funding. It has a modern health centre, a public library and the Steyning Museum.

A spring fair is held on the Spring bank holiday (the last Monday in May).

The Monarch's Way long-distance footpath skirts the southern end of the town.

The Steyning Festival was founded in 2006 by Ann Poupard, a resident of the town. The event is now biennial and runs for two weeks at the end of May/start of June. It features theatre, music, literature, talks, walks, community events and more.

In 2009, the Steyning Festival was awarded a lottery grant to bring international artist and psychogeographer Chris Dooks to Steyning for a month-long residency, resulting in a free MP3 tour.

There is a long established cricket club near the police station. Steyning has a non-league football club called Steyning Town Community Football Club, who play at the Shooting Field. The town also has its own leisure centre.

Steyning Athletic Club, established in 1951, offers a variety of sports to members - including Running, Swimming, Cycling, Race walking, Circuits/Fitness and Triathlon. Annual Club events include the Roundhill Romp (10k running race that is part of the Sussex Fun Run League) and the Steyning Stinger (Full Marathon and Half Marathon on the South Downs).

All content from Kiddle encyclopedia articles (including the article images and facts) can be freely used under Attribution-ShareAlike license, unless stated otherwise. Cite this article:
Steyning Facts for Kids. Kiddle Encyclopedia.