This height has made the mountain very attractive for radio, having several transmitters, radio towers, and antennas, for pagers, cellphones, broadcasting, and amateur radio. The fact that Stone Mountain and Kennesaw Mountain are both protected as parks has led to a proliferation of technology at the top. At the same time, both the antenna farm and the densely packed houses detract from the view of the mountain from surrounding areas of northeast Cobb, south-southeast Cherokee (including much of Woodstock), and western Roswell.

Sweat Mountain is also a part of the ridge that divides the Chattahoochee River basin to the south and southeast, from the Lake Allatoona (Etowah River) basin to the north and northwest. From Sweat Mountain, this runs west-southwest through Cobb to Kennesaw Mountain and Lost Mountain.

At one time the entire mountain was owned by the Wigley family. Henry Clay Wigley continued to live at the base of the mountain for decades. Right across from his house was a gravel road that led to the summit. Years ago, before satellites took over, a U.S. Forest Service ranger would scale a giant fire tower to provide smoke coordinates for fire control every day. With suburbanization, this tower has been removed, but there is a benchmark set in concrete where one of the tower feet once rested. On the most northern side of the summit are natural rock formations, including a natural rock shelter that could house one or two campers.

Wigley Road at one time went from Sandy Plains Road all the way through to Georgia 92, but it was closed in the 1970s due to poor maintenance. The main road now turns off from itself (makes a 90-degree turn) and continues generally west as Jamerson Road. Following the remaining Wigley Road to the dead end, there is a barrow pit just past the barricades. There was a place where natural springs created a huge swampy mudbog in the middle of the Wigley Road, which led to its closing.

In the early 1970s, a lake off Mountain Road at the base of the mountain served as the site for a huge music festival.

In early April 2006, the south side of the mountain was grazed by an F1 tornado, causing relatively minor damage to some homes. The storm moved due east from Noonday to Alpharetta, doing much more serious damage in several other places. 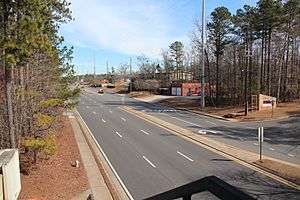 This community is centered around the intersection of Sandy Plains Road (northeast and southwest) and Shallowford Road (east and west), an area that quickly went from forest to parking lots and strip malls in the 1990s. Both roads, which were two lanes each and met at a four-way stop with a flashing red light overhead until then, became four-lane divided arterial roads, and are now several lanes wide each at the intersection.

Gordy Parkway was built from Sandy Plains Road (opposite Holly Springs Road) on the southwest side, clockwise to Shallowford Road on the west, back to Sandy Plains on the northeast side, and just a few more yards or meters back to Shallowford on the east across from Target (which moved from the former Richway a few miles southwest on Sandy Plains Road at Canton Highway after one was built near Town Center at Cobb). This near-circle allowed hundreds of homes to be built west of Sandy Plains Road, most of the existing forest being clear-cut. The family of Frank Gordy, proprietor of The Varsity, owned much of the land, and the part where the one-building Chattahoochee Tech campus now sits was donated to the county, which in turn provided the land for the state technical college.

Despite being only a decade old or less at the time, three of the five major anchor stores have changed, with Drug Emporium becoming an Office Depot, Kmart becoming Home Depot, and Harris Teeter sold to Kroger. There is also a multi-screen movie theater. A similar explosion in land development has occurred in Hickory Flat in the 2000s. 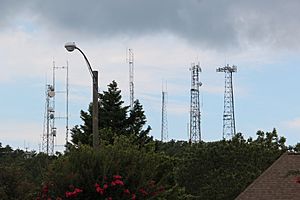 Antennas on the summit

The following broadcast stations are all within 300 meters or 1000 feet of the summit, and are listed with callsign, frequency or channel, community of license, and licensee/owner.

There are also long-standing applications (potentially moot) for broadcast translators by Calvary Chapel on 94.5 and 103.7 to serve Woodstock. Another application for a translator on 102.1 by Community Public Radio to serve "Sweat Mountain" (which is not a recognized community) is also listed by the Federal Communications Commission (FCC).

A second transmitter on former channel 56 (block E, 722–728 MHz) was used by Manifest Wireless (which, like Dish Network, is a subsidiary of EchoStar). It was also an SFN, and used eight locations in metro Atlanta to transmit an ATSC signal, under callsign WQJY980. ATSC tuners showed high signal strength, however there were no standard MPEG-2 channels available, and it appeared that it would be used for ATSC-M/H, the mobile TV standard for terrestrial television stations. (This is different from the worldwide DVB-SH standard, which is derived from the DVB-S standard that Dish Network has used for DBS since the 1990s.) The signal from Sweat Mountain was active, but no service to the public was ever announced.

All content from Kiddle encyclopedia articles (including the article images and facts) can be freely used under Attribution-ShareAlike license, unless stated otherwise. Cite this article:
Sweat Mountain Facts for Kids. Kiddle Encyclopedia.