Taronga Western Plains Zoo, formerly known as (and still commonly referred to as) Western Plains Zoo and commonly known as Dubbo Zoo, is a large zoo near Dubbo, New South Wales, Australia. It opened to the public on 28 February 1977, to provide more living and breeding space for large animals such as elephants and antelopes which needed more space than was available at the restricted Sydney site. The zoo is run by the Taronga Conservation Society (formerly Zoological Parks Board of New South Wales), along with Taronga Zoo Sydney. Western Plains Zoo is located on the Newell Highway in west Dubbo about 5 km from the city.

In the late 1960s, plans to develop a large plains zoo to complement Sydney's Taronga Zoo were established. The new zoo would provide breeding facilities particularly suited to the large plains dwelling animals and to fulfil a need for an open range facility for the display of mainly grazing animals. After considerable planning and preparation, a site on the outskirts of Dubbo in central West New South Wales was chosen. Formerly an army camp during World War Two, the site was transformed into a 300 hectare zoo of woodland and irrigated grasslands.

Western Plains Zoo opened to the public on 28 February 1977. When the zoo opened, it contained 35 different animals from six countries. The zoo is an open-range design, with walls and fences replaced by concealed moats which divide the animals from the visitors. This creates the impression of actually being with the animals in the wild. It was also the first zoo to be built in Australia in 60 years.

In 1994 Western Plains Zoo was awarded as the Best Major Tourist Attraction, the highest honour in Australian Tourism.

On 26 September 2006, The Daily Liberal published an article announcing British comedian John Cleese was visiting the zoo "in order to raise money for a new Greater One-Horned rhino exhibit".

The zoo changed its name to Taronga Western Plains Zoo on 21 January 2009, citing the need to draw attention to the work of the Taronga Conservation Society Australia. 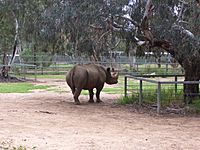 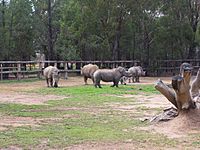 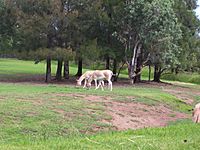 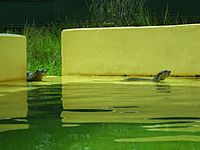 All content from Kiddle encyclopedia articles (including the article images and facts) can be freely used under Attribution-ShareAlike license, unless stated otherwise. Cite this article:
Taronga Western Plains Zoo Facts for Kids. Kiddle Encyclopedia.