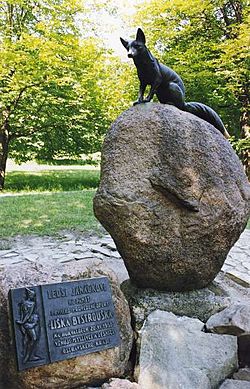 A statue of the Cunning Little Vixen in the park in Hukvaldy, the village where Janáček was born.

The Cunning Little Vixen (original title: Příhody lišky bystroušky, literally translates to The Adventures of Vixen Sharp-Ears) is an opera by the Czech composer Leoš Janáček. Janáček loved animals, and in this opera some of the characters are humans but some are animals. Some of the little animals, (like the grasshopper, frog and cricket) are usually sung by children.

Janáček got the idea of this opera from a cartoon strip called “Sharp-ears” (in Czech: "Bystrouška"). The cartoon was published in a popular daily newspaper Lidové noviny. It was about a vixen (a female fox) and her adventures in the forest. He thought that the story would make a good opera. He made a few changes to the story: he left out a some characters, changed the order of the story a little, and made the humans and the animals behave in a similar way. It was first performed in Brno on 6 November 1924.

When Janáček died in 1928 the last part of the opera was played at his funeral.

The Story of the opera

A forester is sleeping under a tree. Nearby a young vixen (here, vixen means baby fox) is playing. She nearly catches a frog, but the frog jumps away and lands on the forester’s nose. He wakes up and sees the little vixen playing. He catches the vixen and take her home with him. He gave her a name: “Sharp-ears”.

Sharp-ears is unhappy at the forester’s cottage. She is tied up with a rope in the yard. The hens keep teasing her and the dog is boring. One day she tells the hens that they are silly to stay in the farmyard being bossed about by the rooster. She tells them they ought to fly away to freedom. She pretends to die, then jumps up and starts to catch them. When the forester’s wife comes out Sharp-ears bites through the rope and disappears into the forest.

She finds a nice sett (badger's hole) where a badger lives. She wants to live there herself so she chases the badger out of his home. One winter’s night the forester is drinking in the inn. He teases the priest and the schoolmaster for not having found someone to love. They in turn tease the forester for having let the vixen go. The schoolmaster starts to go home. He is drunk. He sees the vixen who reminds him of his former lover, but he is too drunk to catch hold of her.

Sharp-ears meets a handsome young male fox called Goldskin. The two fall in love. When she realizes she is pregnant the fox and vixen get married. The woodpecker is the priest who marries them. The cubs (baby foxes) are born in the spring.

The forester is still searching the forest for Sharp-ears. One day he finds a dead hare. The poacher persuades the forester to make a trap, because he thinks that Sharp-ears will come back to eat the hare. The cubs arrive and play near the trap. Sharp-ears realizes the poacher is trying to catch her. She teases him cruelly and dares him to kill her. He shoots her with his rifle, then he is very sad.

Some time later the forester is sleeping under a tree. He wakes up when a frog lands on his hand. He sees a young vixen playing in front of him. He tells the young cub that she looks just like her mother. He reaches out for her but catches a frog instead. He lets it go. He realizes that life must go on.

Meaning of the story

Janáček made some changes to the story in the cartoon. This made it more suitable for an opera. He did not have all the characters that are in the cartoon, and he changed the order of the story to make it more dramatic. He compares the human beings with the animals. For example: we see vixen Sharp-ears falling in love and having a family. But the forester’s friends: the school master and the priest, have not been so lucky with their love-life. The priest looks like the badger, the woodpecker is like the priest. When the opera is performed the same singer sometimes sings both parts. The end of the opera is like the beginning. This shows that life carries on and one generation follows another.

The music matches the story beautifully. There are a lot of tunes with very exciting harmonies. Sometimes he uses modes and whole-tone scales. Janáček often makes his music sound like folk music of his country.

All content from Kiddle encyclopedia articles (including the article images and facts) can be freely used under Attribution-ShareAlike license, unless stated otherwise. Cite this article:
The Cunning Little Vixen Facts for Kids. Kiddle Encyclopedia.