The Maryland Zoo in Baltimore facts for kids

The Maryland Zoo — also known as The Maryland Zoo in Baltimore and formerly known as The Baltimore City Zoo or the Baltimore Zoo — is a 135-acre park located in historic Druid Hill Park in the northwestern area of the City of Baltimore, Maryland, (U.S.A.), with the postal address of 1876 Mansion House Drive. Druid Hill was opened in 1876 as the first major park purchase by the City under foreseeing Mayor Thomas Swann (1809-1883), (and later as 33rd Governor of Maryland, 1866-1869) and was later designed by famed nationally-known landscaper Frederick Law Olmsted (1822-1903), with additional work on various park buildings contributed by future Baltimore City Hall architect George A. Frederick (1842-1924), and Park Commissioner John H.B. Latrobe (son of earlier famed British-American architect Benjamin Henry Latrobe [1764-1820]), who also was an accomplished lawyer, author, artist, amateur architect and civic leader. Olmsted had earlier won a contest for the design of plans for New York City's famed Central Park in mid-town Manhattan in 1858, a year after it opened, and worked on the massive public works project during its construction from 1858 to 1873. The Maryland Zoo is now currently home to over 2,000 animals, and is accredited by the Association of Zoos and Aquariums (AZA). 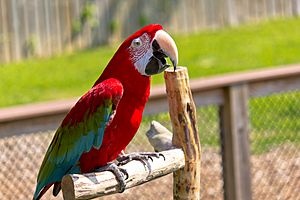 Ara chloroptera at a keeper talk 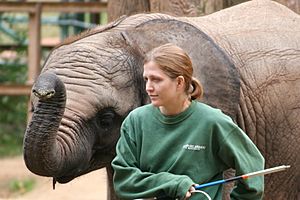 Samson with one of his keepers 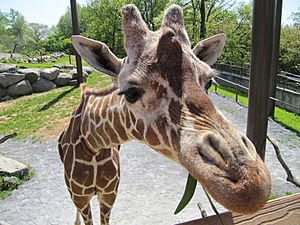 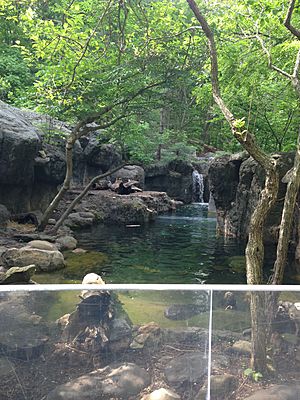 The Stream at Maryland Wilderness 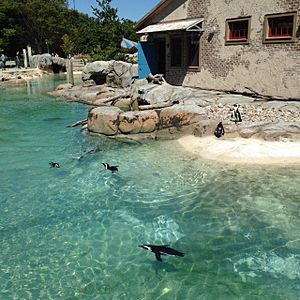 The zoo has five main areas: Schaefer Plaza, Zoo Central, Maryland Wilderness, Polar Bear Watch, and African Journey. Visitors enter the main ticketing gate of the zoo at Schaefer Plaza named in honor of former Baltimore Mayor and Maryland Governor William Donald Schaefer (1921-2011). The plaza features a gift shop, a playground area known as "Celebration Hill", the zoo's original lion statues, and the Prairie dog exhibit. Prior to the zoo's redesign in the early 2000s, guests would continue down the historic "Main Valley", to access the exhibits. A tram now connects visitors to Zoo Central free of charge. Zoo Central features a concessions area, carousel, and children's train ride that traverses the north side of the African Journey exhibit.

The largest area of the zoo, "The African Journey" displays a wide range of animals originating from the continent of Africa. The main exhibit areas are:

Renovations on the elephant exhibit facility began 2007. In March 2006, the Maryland Zoo announced it would be accepting three female African elephants from the Philadelphia Zoo in Pennsylvania as part of the expanded elephant exhibit, but construction was then indefinitely delayed and later the elephant loan was canceled. However, two new elephants came to the Maryland Zoo from Arkansas in 2007. On March 19, 2008, "Felix," one of the Zoo's female elephants, gave birth to a 290-pound male calf, the first elephant born in the Zoo's history. The baby is named "Samson" and is now viewable, weather permitting. By

In the spring of 2010, the Zoo's warthogs had two male offspring, which were viewable beginning in May of that year.

On December 29, 2019, the Zoo welcomed a baby chimpanzee after an 8 month gestation period.

In March 2018, the zoo announced plans to expand the zoo's elephant, giraffe and lion exhibits. This $20 million project was made to improve living standards for the animals and also to give a much better viewing experience for guests of the Maryland zoo. The details of this initiative include the expansion of the Elephant habitat from 0.92 acres (0.37 ha) to 2.1 acres (0.85 ha), The Expansion of the Giraffe habitat by 33%, the removal of what used to be "Rock Island" and several new viewing areas for the lions. The renovations finished in the Summer of 2019.

Displaying animals found in Maryland, visitors can watch otters swim over their heads, jump across lily pads, explore a cave, or climb into giant bird nests.

The "Maryland Wilderness" featuring The Children's Zoo is dedicated to donator and supporter, Lyn P. Meyerhoff.

A small-model diesel train makes a one-mile circuit and over a 105-foot bridge through parts and scenery of the Zoo, remembering the heritage of the old Baltimore and Ohio Railroad in the city and state, with its long-time decorated colors of blue and gray colors on the locomotive and cars of the old historic road, first railroad built in America since 1827. There has been a zoo train for many years, though the equipment and route has changed several times. The current zoo train from 2010 is pulled by a bright red new detailed scale replica of the 1863-era "C. P. Huntington" locomotive, named for a famous railroading tycoon and magnate in California and Virginia in the 19th and early 20th centuries.

The "Polar Bear Watch" features two polar bears named Neva and Amelia Gray, as well as grizzly bears, ravens, bald eagles, and formerly snowy owls and Arctic foxes. Guests can view the polar bear from underwater viewing areas, or from the windows of an actual massive Tundra Buggy, purchased from the Canadian company that creates these one of kind vehicles for viewing the polar bear in its natural habitat. Beginning in January, 2016, the Polar Bear Watch also became home to two rescued orphaned grizzly bear cubs. They were named Nova and Nita after the names were chosen in a public contest.

Magnet, another polar bear, won a contest put forth by Microsoft's Zoo Tycoon for best zoo animal. Magnet was available as a downloadable patch for the game and during the game, polar bears purchased via the Magnet icon would play with a red ball. The real Magnet was euthanized due to kidney disease in 2015.

The Zoo’s new state-of-the-art African penguin exhibit located between Polar Bear Watch and African Journey, opened on Saturday, September 27, 2014. It brings guests up-close to nearly 60 (and growing) African black-footed penguins, white-breasted cormorants and Pink-backed pelicans in a vivid re-creation of their natural habitat along the coasts and islands of South Africa. There is an underwater viewing window and view to a tidal pool that creates a wave-like effect for the birds.

The Zoo gives guests an extra peek into the lives of the penguins with the opportunity to see them get their daily fill of fish with morning and afternoon feedings.

All content from Kiddle encyclopedia articles (including the article images and facts) can be freely used under Attribution-ShareAlike license, unless stated otherwise. Cite this article:
The Maryland Zoo in Baltimore Facts for Kids. Kiddle Encyclopedia.