Along with bus services, Jacksonville offers fixed routes operated by the Jacksonville Transportation Authority (JTA). The Skyway is a people mover system located in Downtown Jacksonville. Its two lines and eight stations connect the Northbank, Southbank, and Lavilla districts. JTA is in the process of securing funding for an extension into Brooklyn, a neighborhood just south of Lavilla. 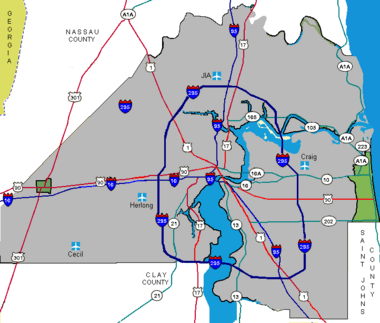 Highways and Airports in Jacksonville

Jacksonville is a sprawling city making cohesive walking and bicycling options difficult. Cycling still remains popular in some central urban areas for both recreation and commuting. The city manages to sustain a relatively low amount of traffic congestion for a city of its population, this is mostly related to the vast 767 square miles (1,990 km2) area the city covers, an area much larger than most cities with a population over 800,000. Jacksonville's low population density might also be the reason the city has yet to further develop its mass transit bus system or a heavy or light rail network. Among urbanized areas with a population of 1 million or greater in the United States, Jacksonville ranked tenth in freeway lane miles per 1,000 population and eighth in freeway-equivalent miles per 1,000 population. As the 12th-largest city in the U.S., Jacksonville has repeatedly been ranked below 40th in mass transit availability. As a result, the city is not well known for its walkability. 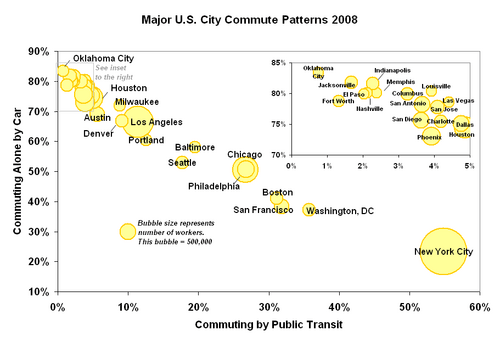 When compared to other U.S. cities, Jacksonville appears on the high end of car use, even amongst its car dependent peers in other Sunbelt regions.

All content from Kiddle encyclopedia articles (including the article images and facts) can be freely used under Attribution-ShareAlike license, unless stated otherwise. Cite this article:
Transportation in Jacksonville, Florida Facts for Kids. Kiddle Encyclopedia.