Wattle Grove is a suburb of Sydney, in the state of New South Wales, Australia. Wattle Grove is located 30 kilometres south-west of the Sydney central business district in the local government area of the City of Liverpool.

Wattle Grove is a residential suburb with a small shopping centre and a number of recreational areas such as Wattle Grove Park, Australis Park, Wattle Grove Lake and the surrounding Lakeside Park.

Wattle Grove was built on former Australian Defence Force land. The original plans for a suburb were made by the government of Prime Minister Gough Whitlam in the 1970s. Infrastructure was built and the suburb lay dormant until further developed by Delfin Property Group, assisted by the Defence Housing Authority in the 1990s. In 1992, the suburb's name was changed from Holsworthy Village to Wattle Grove. On 12 April 1992, Wattle Grove was officially opened by Prime Minister Bob Hawke.

In 2006, Wattle Grove's tree-lined streets underwent significant change. Many of the casuarina trees (Australian Pine) that lined the main road were replaced, due to roots potentially damaging nearby houses or falling during storms. Native shrubs have been planted in their place.

Wattle Grove is well connected to other regions of Sydney due to its proximity to the M5 and M7 Motorways. Bus routes 901 and 902, operated by Veolia Transport, run within the suburb. Route 901 connects to Holsworthy railway station and Liverpool railway station.

The Wattle Grove area was designed to have a strong community 'feel' under the redeveloping of the area by Delfin in the 1990s.

Today, it is possible to evaluate the success of this by the large numbers of young families walking the tree lined footpaths on the weekends, and the strong turnouts at community events, such as the Christmas Carols and the Annual Easter Egg Hunt in Australis Park on Easter Sunday. 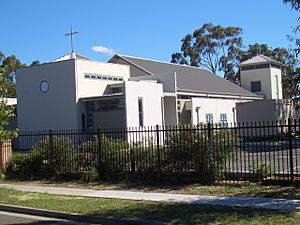 Playgrounds are located throughout the suburb, as well as walking and bike paths leading to an artificial lake in the suburbs center. Moorebank Sports Club, located nearby, provides opportunities for formal training in rugby League, soccer, hockey baseball, cricket, Australian Rules football and netball. The Sporting codes are associated with Moorebank Sports Club, all being in the same complex except hockey and AFL which are located in other premises.

All content from Kiddle encyclopedia articles (including the article images and facts) can be freely used under Attribution-ShareAlike license, unless stated otherwise. Cite this article:
Wattle Grove, New South Wales Facts for Kids. Kiddle Encyclopedia.