Windsor is a town in Sonoma County, California, United States. 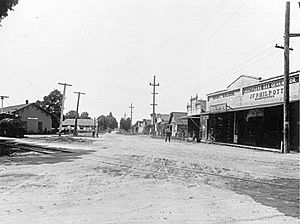 Windsor's first European settlers arrived in 1851. In 1855, Hiram Lewis, a Pony Express rider, became the town's first postmaster. He named the town Windsor because it reminded him of the grounds around Windsor Castle, a medieval castle from his home country of England. In 1855, a post office was established in Windsor. The following year, a business enterprise was built in eastern Windsor, which included a goods store, a shoe shop, a grocery and meat market, a saloon, a hotel, a boarding house, and two confectionery shops. The Northwestern Pacific Railroad was completed through the town in 1872, providing a faster and cheaper link to the Bay Area.

On May 21, 1905, a fire destroyed the center of Windsor. Fanned by heavy winds, the fire destroyed several businesses, including a hotel and a barber shop. The damage was at an estimated $30,000 worth of property.

In 1915, the Old Redwood Highway through Windsor was paved. Up until then, all roads in the area had been dirt.

During World War II, a United States Army Air Forces training air base (currently the Charles M. Schulz – Sonoma County Airport) was built in southern Windsor, and it was common to hear fighter aircraft and bombers flying over the town.

In 1943, a camp for German prisoners of war was built west of downtown Windsor, on the site of a former migrant labor camp. The camp was a branch camp of the much larger Camp Beale POW camp. Those assigned to the camp worked (for $0.80 per day) at farms in the county, picking apples, prunes, hops, and other crops, packing apples, and similar work.

In 1996, Windsor adopted its current General Plan. Since that time the Town has grown and changed. When the last General Plan was adopted, the internet was not widely used and the youngest members of today’s workforce had not been born yet. New laws have passed that affect general plans and new planning strategies have been developed. These changes require a reevaluation of the existing General Plan and confirmation of the vision for Windsor. The 2040 General Plan project is currently underway and the General Plan will look ahead to the year 2040, so the update will not only bring policies and programs up to date, but also position Windsor for the next 25 years.

In January 1998, Windsor voters approved a twenty-year urban growth boundary, with 72% in favor.

Windsor is located on U.S. Highway Route 101 in the Russian River valley. Neighboring cities include Healdsburg, Santa Rosa, and Forestville.

Highlights of the 2016 Windsor Local Economic Profile include:

The Census reported that 99.8% of the population lived in households and 0.2% lived in non-institutionalized group quarters.

Since 2001, the Town of Windsor and local sponsors put on a weekly Summer Nights on the Green free concert series full of healthy fun, quality family entertainment and great food, collectively with the Windsor Farmer’s Market.

Windsor is home to several other community events in coordination with local non-profits and standing citizen advisory groups.

Other events included the Windsor Half Marathon and Expo, the annual Sonoma County Hot Air Balloon Classic, and Ironman Vineman triathlon, the oldest iron-distance event in the continental United States (dating back to 1990).

During summer at the Windsor Town Green there are free outdoor concerts known as the "Summer Nights on the Green". There is also a Kids Movie Series.

Windsor Hometown Heroes Military Banner Program was created to recognize and honor Windsor residents and their immediate family members who are serving our country in the United States Armed Forces. Every November, friends and family join together with the public to honor home-grown, active-duty service men and women during a Military Banner Red Carpet Ceremony. A banner for each honoree joins the banners already hung in Windsor Civic Center since the program's inception in 2013.

Holiday Celebration and Charlie Brown Christmas Tree Grove Display. Every December, Windsor celebrates the opening of the holiday season under the glow of old lamp lights with live entertainment, children’s activities, and graceful horse-drawn carriages carrying guests around beautiful Windsor Town Green. The Charlie Brown Christmas Tree Grove is an annual holiday event located on Windsor’s Town Green, the premier central gathering place for Windsor residents and visitors. The event highlights 200 lighted individually decorated holiday trees lining the walkways of the Green. Businesses, individuals, students and groups showcase their talents in design and decorating with their themed trees which draw thousands of visitors to the Grove during the month of December. The event runs from Decorating Day, the Sunday after Thanksgiving, until the first Saturday after New Year’s Day. It is a highlight of the annual Town of Windsor’s Holiday Celebration on the Green evening event on the first Thursday in December.

The Windsor Historical Society was founded and is dedicated to collecting, preserving, and disseminating the history of Windsor and Russian River township through museum exhibits, historic sites, educational programs and printed materials.

The Windsor Historical Society’s Museum, opened in February 2009 and features exhibits on the people and events that shaped the history of Windsor. It is located in the historic Hembree House adjacent to the Town’s recreational senior center facility.

Several community and neighborhood parks are settled within the Town of Windsor. Most park amenities include a variety of sports fields, play structures, restrooms and picnic areas. Local regional parks offer hundreds of acres with varied terrain and scenic views. Some trails are open to hikers only, while others are available to equestrians and cyclists as well. Trails range from uneven single-track to wide ranch roads.

The Town of Windsor offers many recreational programs year-round and seasonal. Programs include: early childhood education and interactive classes, youth sports, activities for Seniors, arts and music programs, camps and much more.

From 1990 to 1995, the Windsor Golf Club, a public golf course, hosted an event on the PGA's Hogan Tour (later called the Nike Tour, currently called the Web.com tour); in April 2017 it will host the 54-hole women’s POCMED Golf Classic, part of the Symetra Tour, the qualifying tour for the Ladies Professional Golf Association.

In recent years, the Town of Windsor has received awards or recognition for:

All content from Kiddle encyclopedia articles (including the article images and facts) can be freely used under Attribution-ShareAlike license, unless stated otherwise. Cite this article:
Windsor, California Facts for Kids. Kiddle Encyclopedia.