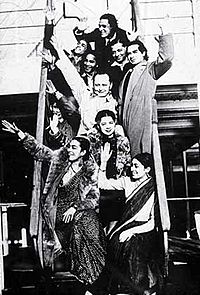 Sehgal (front left) with the Uday Shankar Ballet Troupe in the 1930s.

Sehgal was born in Saharanpur, Uttar Pradesh in 1912. She grew up in an aristocratic Muslim family. She received the Padma Vibhushan, India's second-highest civilian honor, in 2010. She described herself as an agnostic, having been an atheist in her youth.

Sehgal died in a hospital in New Delhi from cardiac arrest caused by pneumonia on 10 July 2014 at the age of 102.

All content from Kiddle encyclopedia articles (including the article images and facts) can be freely used under Attribution-ShareAlike license, unless stated otherwise. Cite this article:
Zohra Sehgal Facts for Kids. Kiddle Encyclopedia.