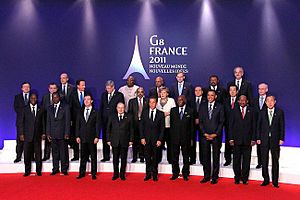 Traditional "family photo" at the G8 summit meeting in Deauville

The Deauville summit of the Group of Eight (G8) was the 37th meeting in a series which began in 1976. 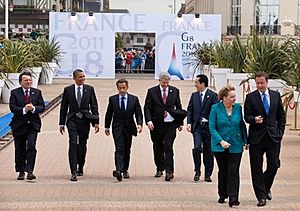 These summit participants were the current "core members" of the G8:

Other national leaders are traditionally invited to attend the summit. They participate in some, but not all, G8 summit activities. African leaders who came to Deauville included:

Discussions included some issues which remained unresolved from previous summits.

Some of the specific topics on the agenda were:

World events caused the list of topics to grow, including 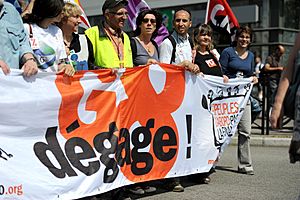 Front banner of the anti-G8 demonstration in Le Havre prior to the G8 summit, featuring the "G8 dégage" theme.

Protest groups and others organized public events. In these demonstrations, the slogan G8 dégage ("G8 Go Away") was notable.

The demonstrators are widely understood to be against globalisation.

According to the Mayor of Deauville, "Our main interest is the economic implications."

For some, the G8 summit became a profit-generating event. For example, the G8 Summit magazines have been published under the auspices of the host nations for distribution to all attendees since 1998.

All content from Kiddle encyclopedia articles (including the article images and facts) can be freely used under Attribution-ShareAlike license, unless stated otherwise. Cite this article:
37th G8 summit Facts for Kids. Kiddle Encyclopedia.