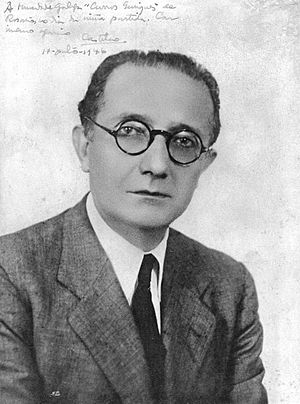 Alfonso Daniel Rodríguez de Castelao (30 January 1886 – 7 January 1950), also known as Castelao, was a Spanish writer on Galician language and one of the main symbols of Galicia. As a politician, caricaturist, and writer, he is one of the leading figures of Galician culture and identity.

Castelao spent his childhood and adolescence in Santa Rosa de Toay, Argentina. In 1900, the Castelao family returned to Rianxo. In 1908, he obtained his degree in Medicine from the University of Santiago de Compostela. The next year, he passed his doctorate in Madrid, where he started to become known as a caricaturist, and settled down in Rianxo, joining the political movement Action Galicia (Acción Gallega in Spanish). As a caricaturist, Castelao focussed on the everyday in a humorous way, although after the cruelty and tragedy of the Spanish Civil War, he turned to using his art to denounce the misery of Fascism.

In 1916, he moved to Pontevedra, where he joined the Irmandades da Fala and participated in the Asembleia Nazonalista de Lugo, signing an important national declaration. In 1920, he became editor of the magazine Nos and travelled through France, the Netherlands and Germany. In 1922, he wrote the novel Un Ollo de Vidro and in 1924 he joined the Seminario de Estudos Galegos and founded the Coral Polifonica de Pontevedra. Two years later he published Cousas, and in 1929 he travelled to Brittany to study its stone crosses and publish As Cruces de Pedra na Bretaña.

All content from Kiddle encyclopedia articles (including the article images and facts) can be freely used under Attribution-ShareAlike license, unless stated otherwise. Cite this article:
Alfonso Daniel Rodríguez Castelao Facts for Kids. Kiddle Encyclopedia.