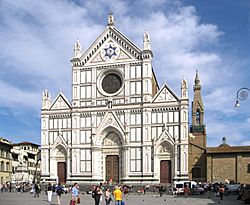 Basilica of Santa Croce in Florence

The Basilica di Santa Croce (Basilica of the Holy Cross) is the main Franciscan church in Florence, Italy. It is a minor basilica of the Roman Catholic Church. It is situated on the Piazza di Santa Croce, about 800 metres south east of the Duomo. When the site was chosen, it was a marshland outside the city walls. Many very famous Italians, such as Michelangelo, Galileo, Machiavelli, Foscolo, Gentile, Rossini, and Marconi are buried inside the church. For this reason, the church is also known as the Pantheon of the Italian Glories (Tempio dell'Itale Glorie or Pantheon dell'Itale Glorie).

All content from Kiddle encyclopedia articles (including the article images and facts) can be freely used under Attribution-ShareAlike license, unless stated otherwise. Cite this article:
Basilica of Santa Croce, Florence Facts for Kids. Kiddle Encyclopedia.