Basilica of the Sacred Heart, Notre Dame facts for kids

Kids Encyclopedia Facts
For other Basilicas of the same name, see Basilica of the Sacred Heart (disambiguation).

The Basilica of the Sacred Heart in Notre Dame, Indiana, USA, is a Roman Catholic church on the campus of the University of Notre Dame, also serving as the mother church of the Congregation of Holy Cross in the United States. The neo-gothic church has 44 large stained glass windows and murals completed over a 17-year period by the Vatican painter Luigi Gregori. The basilica bell tower is 218 feet (66 m) high, making it the tallest University chapel in America.

It is consistently ranked among the most beautiful university churches in the country and around the world.

When the University of Notre Dame was first established by Rev. Edward Sorin, CSC, the community held religious services in a small log cabin built between 1842 and 1843. 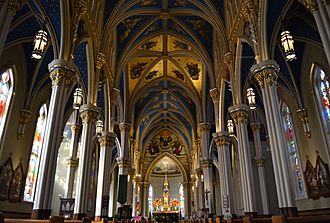 The growth of the institution required a proper church, and it was decided to spend $1500 in building a new edifice. The project was begun on May 25, 1848 and was dedicated on November 12 of the following year. Its solemn consecration took place a year later, on November 11, 1849, by the hands of the Bishop of Vincennes, Maurice de St. Palais. Father Sorin describes the first church: "The style is Greek, with rounded arches. There are three vaults and six columns which produce a very pretty effect. The tribune, which has been built for the use of the Sisters, is elliptical like the sanctuary. It is already enriched with an organ of Mr. H. Erben, and, though a little weak for the church, is one of its most precious ornaments."

After the church was built, a bell was transferred to its belfry. In the spring of 1851, the wind swept belfry and bell to the ground. A greater bell, weighing three thousand, two hundred and twenty pounds, was purchased that summer in Cincinnati. It was elevated to one of the towers that had been built at the front of the church. After being blessed on the feast of the Assumption.

The second (and present) church

The University's needs soon outgrew the small first church and in 1868 In the spring of 1869 it was decided to build a new church dedicated to Our Lady of the Sacred Heart, despite the lack of funds in the university's treasury. 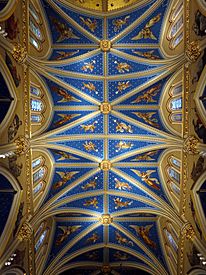 Ceiling of the Main Nave

The first plans were drawn by the popular architect Patrick Keely , who envisioned a baroque plan similar to the Church of the Gesu in Rome. because of the limited budget the church at Notre Dame was not to be as large or as elaborate as the Roman edifice, but rather the size of the church of the same name in Montreal. The original plan featured a cruciform church two hundred feet in length, three naves and a transept, that could seat two thousand persons, with a dome which was to be placed over the intersection of the transept at the central nave and two large bell-towers. The estimated cost would be around $100.000.

Rev. Sorin decided that these plans were too grandiose, and that the church could not cost more than half that sum, since at the moment they had only about $8,000 dollars at hand. In January 1870, a new architect, Mr. T. Brady from St. Louis, drew new plans for the church. It is not sure who drew the definite plans, but it is likely that also Fr. Sorin, Rev. Alexis Granger, C.S.C., and Irish-born Brother Charles Borromeo Harding, C.S.C., a hard-working, self-taught campus builder were part of the planning and building. The new church was erected in Gothic style rather than baroque, reflecting Fr. Sorin's French taste and his will to build a remarkable and striking landmark. The foundations for the new church were begun in the spring of 1870, and the cornerstone was laid on the 31st of May 1871, with six bishops present, among whom Archbishop Purcell. The building took many years to finish and underwent many changes, and functions and celebrations were held in the unfinished building as soon as it was inhabitable, and a new organ was installed. It was finally consecrated by Bishop Joseph Gregory Dwenger on August 15, 1888. In 1931, it underwent a first thorough renovation by the hands of New York architect Wilfred E. Anthony. 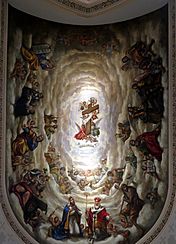 Exaltation of the Holy Cross

In 1968, the church was renovated with the intention of bringing it in line with the liturgical reform of the Second Vatican Council, although some claim that renovations of this type were not mandated by the Council. The church again received a renovation 20 years later, executed by Conrad Schmitt Studios. The conservation and restoration of the historic stained glass windows, created in Le Mans, France, was one of the studio's largest single projects, with 116 windows and over 1,200 panels of glass. On January 17, 1992, Pope John Paul II raised the Church of the Sacred Heart to the status of basilica. This status helps make it a popular destination for pilgrims and tourists to the site, who number around 50,000 per year. At one time, Bishop Daniel R. Jenky, CSC, of the Diocese of Peoria, Illinois, was rector of the basilica, before he became head of the religious community there and later auxiliary bishop and vicar general of the diocese. Under his tenure, many strides and revisions were made and the church was elevated to a basilica.

The exterior of the church features a bell tower with a spire and two lateral pinnacles. The basilica is built in Notre Dame brick. 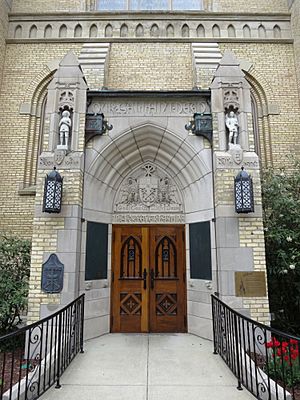 The World War I Memorial Door was dedicated by President Rev. Matthew J. Walsh on Memorial Day May 30, 1924. The dedication was followed by a military field mass. It was designed by Notre Dame architects Francis Kervick and Vincent Fagan and it was added to the east transept of the basilica. Plans for a memorial for Notre Dame’s contributions to Wolrd War I began shortly after armistice in 1919. A plaque commemorates the 46 Notre Dame students, alumni, and faculty who died in combat; initially plans were made to commemorate all 2500 Notre Dame affiliates who fought in the war, including presidents Rev. Matthew J. Walsh and Rev. Charles L. O'Donnell. Funds were collected by the Notre Dame Service CLub and the local chapter of the Veterans of Foreign Wars. The portal bears the incription 'God, Country, Notre Dame'.

The high altar, a curiously graceful object in bronze, was built in shops of Froc-Robert in Paris, which had been sent to Philadelphia for the Centennial Exposition, was purchased by Father Sorin and placed in the Church. 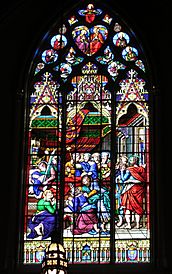 In the Lady Chapel, Gregori painted the luminous exaltation of the Cross, where the True Cross is exalted under the motto of the Congregation, Ave Crux Spes Unica. The cross is surrounded by saints and prophets; particularly noteworthy is St. Patrick, that was added by Gregori after requests from the student body to honor its Irish heritage. 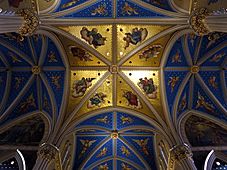 There are 116 stained glass windows consisting of more than 1,200 individual panels; they were designed and made by the Carmelite nuns in Le Mans, France, and were installed beginning in 1873, over a period of 15 years. Today, they are priceless, because comparable artifacts in France were destroyed during the two World Wars.

They depict saints, apostles, theologians, and biblical scenes and many of the figures are life-sized. A window on the north side of the west transept depicts the Sacred Heart of Jesus that inspired the Basilica's name, and another on the south side shows Father Sorin presenting the building to God.

The Basilica contains seven side chapels. The most prominent is the Lady Chapel, located behind the main altar. 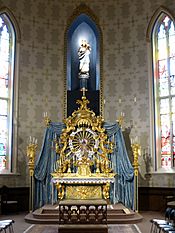 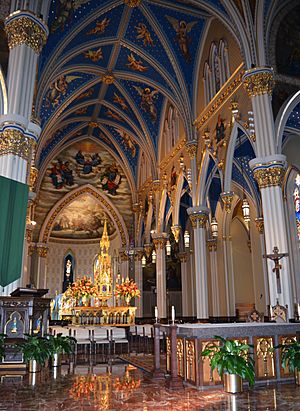 A Lady chapel was a common feature in medieval cathedrals and it was also inspired by the one present in St. Patrick's Cathedral in New York. The main feature of the chapel is the statue of Mary. Underneath it, there is a baroque altar that is believed to come from the studios of Giovanni Bernini in Rome, where Fr. Sorin had seen it during one of his trips. On the east of the Lady Chapel there are the Chapel of Holy Angles, the Baptisimal Chapel, and the Holy Cross Chapel, where Cardinal John O'Hara, the university's president from 1934 to 1940 and the first member of the Congregation of Holy Cross to be named a cardinal, is entombed. The Holy Cross Chapel also holds the Return of the Prodigal Son statue by Ivan Mestrovic.

On the east side of the Lady Chapel, there is the Reliquary Chapel. It hosts relics of the Twelve Apostles, a piece of the True Cross, the burial of St. Severa, and numerous other objects of veneration. Next comes the Brother Andre Chapel, which holds a statue of Blessed Brother Andre Bessette, C.S.C., who was beatified in 1982 for his work among the needy in Montreal.

The Holy Family Chapel honors the life of St. Joseph and hosts Ivan Mestrovic's masterpiece, The Descent from the Cross or Pieta. The sculptor did the sketches for this magnificent pieta while he was a political prisoner of the Nazis. Mestrovic used his own likeness for Joseph of Arimathea. The work was exhibited at New York's Metropolitan Museum of Art before going on display in the church in 1955. 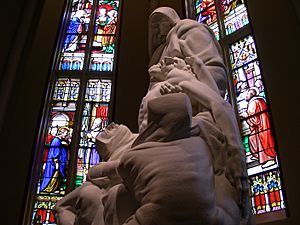 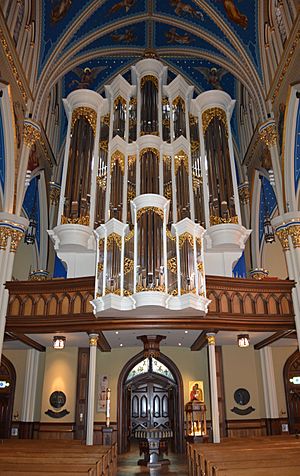 In December 2015, organ technicians began the process of moving the Holtkamp organ to a local parish, to install a new Basilica organ donated by the Murdy family. It was scheduled to be operational by Christmas 2016. The new Murdy Family Organ will have 5,164 pipes, designed and built by Paul Fritts & Company Organ Builders.

The basilica is the main liturgical center for the university community. Mass is held twice daily, while the university is in session, and once daily during breaks. Each weekend there are three Sunday masses celebrated for students, faculty, staff and community members. The basilica is a popular place for weddings of Notre Dame alumni, hosting several weddings each Saturday, whenever the Fighting Irish do not have a home football game. The basilica has also been the site of final professions and ordination masses for the Congregation of Holy Cross, as well as funerals for the religious community and for alumni. 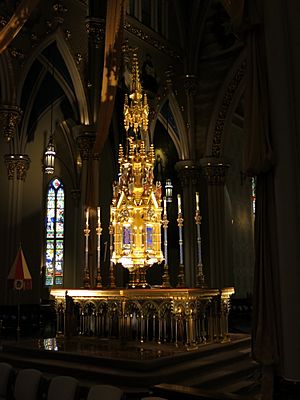 Each Sunday evening the basilica holds Solemn Vespers and a special service during Advent, known as Lessons and Carols. Stations of the Cross is celebrated each Friday during the season of Lent. At other times throughout the year, the basilica hosts special liturgies of all kinds. The Paschal Triduum is celebrated every Easter and it lasts from Holy Thursday with the celebration of the Last Supper until Easter Sunday with Vespers. These celebrations are very popular among students and local inhabitants, and Easter liturgies are always very crowded.

Located in the Crypt Church (basement level) of the basilica is Sacred Heart Parish.

The original 23 bells were installed in 1856 and make up the oldest carillon in North America. They were made in France, and each has a name related to Mary. The final bell, which is one of the grandest in the United States, was blessed in 1888, during Father Sorin's Golden jubilee. It is named for St. Anthony of Padua, it is an immense bass bell, or bourdon, more than seven feet tall and weighing 15,400 pounds.

All content from Kiddle encyclopedia articles (including the article images and facts) can be freely used under Attribution-ShareAlike license, unless stated otherwise. Cite this article:
Basilica of the Sacred Heart, Notre Dame Facts for Kids. Kiddle Encyclopedia.