Bears in Ireland facts for kids 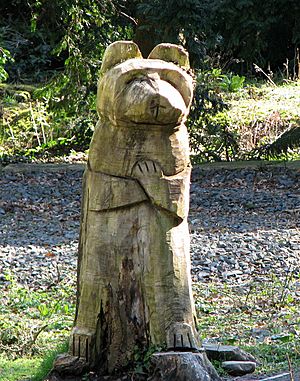 Statue of a bear, Mount Stewart. 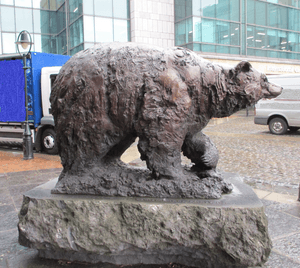 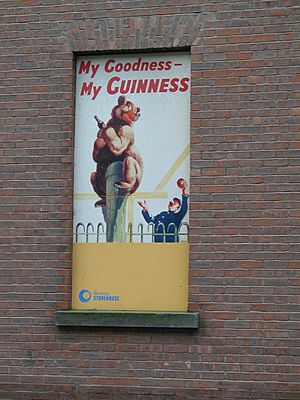 Bears were once common in Ireland but are now extinct on the island, dying out in the 1st millennium BC.

The cave bear (Ursus spelaeus) lived in Ireland before going extinct c. 22,000 BC.

Bears in Ireland often hibernated in caves; several of them died while hibernating and their bones found by later archaeologists. The most famous examples are in Poll na mBéar (Cave of the Bears) in County Leitrim, and Aillwee Cave, County Clare. Remains have also been found at Lough Gur; County Kildare; and County Longford. Perforated bear teeth (worn on necklaces) have been found in caves in County Clare.

A bear patella bearing butchery marks has been dated to 10860–10641 BC; it was found in the Alice and Gwendoline Cave, County Clare and is the earliest known evidence of human activity in Ireland.

In Old Irish, there are three words used for bear:

The word art fell out of use, with the word gamuin ("calf") being added to math to create mathgamain, and the word beithir being respelled as béar.

The elements art and math often appear in personal names like Arthur or surnames names such as MacMahon. In the 12th century Mathghamhain mac Conchobar Maenmaige Ua Conchobair was a prince of Connacht; Mathghamhain Maonmhaighe Ó Briain was King of Thomond in the 15th century; and Mathghamhain Ó hIfearnáin was a poet of the 16th century.

Art mac Cuinn, Art Imlech and Art mac Lugdach were legendary High Kings of Ireland; King Arthur's name is believed to be Brythonic for "bear-man"; and Art Óg mac Murchadha Caomhánach was a 14th-century king. The name Artrí ("bear-king") is also recorded; Artrí mac Cathail was King of Munster in the 8th–9th centuries, and Artrí mac Conchobair was briefly Abbot of Armagh in the 9th century. The surname O'Hart also derives from Ua hAirt, "descendant of Art"; they were based around the Hill of Tara before losing their land in the Norman invasion and resettling in County Sligo.

Bears occasionally appear in Irish mythology and folk tales, for example, in the tale of The Brown Bear of Norway.

Bears died out in Ireland prior to the coming of the Celts, so their name does not appear in very many place names. The Beara Peninsula, Bear barony and Bere Island are not named for the mammal; the name is believed to have the same root as Iberia. Lismaha (Irish Lios Matha), a townland in County Roscommon, possibly means "bear ringfort", although it could also be "Matthew's ringfort." 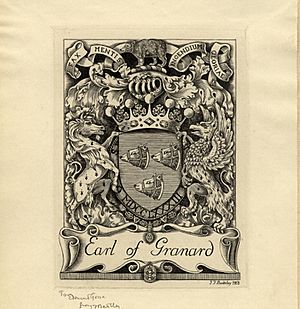 Arms of the Earls of Granard, featuring three bear heads. As is common in British heraldry, the bears are depicted wearing muzzles, perhaps reflecting the lack of wild bears in Great Britain and Ireland.

Two polar bears lived in Dublin Zoo between the early 1980s and 2003. The female bear's behaviors caused concerns and an independent study was commissioned which found bears needed to be able to spend time alone when they choose. It was later moved to a zoo in Hungary where their needs can be accommodated better.

Habitat loss has made it impossible to reintroduce the bear to Ireland, but there are three brown bears — rescued from a private zoo in Lithuania — residing in Wild Ireland, a 23 acres (9.3 ha) reserve on the Inishowen Peninsula.

All content from Kiddle encyclopedia articles (including the article images and facts) can be freely used under Attribution-ShareAlike license, unless stated otherwise. Cite this article:
Bears in Ireland Facts for Kids. Kiddle Encyclopedia.