Blair is a city in Trempealeau County, Wisconsin, along the Trempealeau River. The population was 1,366 at the 2010 census.

Blair is on the former Green Bay and Western Railroad, which ran down the Trempealeau River valley to Winona, Minnesota. 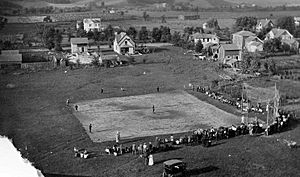 Blair vs Arcadia, 1912. Photo taken from the bell tower of the old Blair School.

The city was first settled during the 1850s. The majority of the city's population are descended from Norwegian settlers, with a smaller group descended from German settlers. The city's Norwegian heritage is represented by annual lefse and lutefisk suppers at the churches and a love of polka music. A lefse company is located in Blair.

The city's name was changed from Porterville in 1873 when the Green Bay and Western Railroad was routed through the city. The new name of Blair came from one of the railroad's chief investors, John Insley Blair. At one time, during the heyday of railroads, a branch line connected the GB&W with the nearby city of Ettrick (although it was later abandoned). The railroad continues to operate, although under a different name.

The city has avoided the fate of some small towns in the Midwest which slowly lost population due to young people leaving for jobs elsewhere. The population of Blair nearly doubled in the years between 1950 and 2000. During the 1950s and earlier annual floods during the snow melt were often experienced, but better farming techniques now make flooding rare. More recently, a number of Amish farming families have settled in the area and their horse-drawn carriages are sometimes seen on the roads.

Two highways connect to the city: Highway 53, a north-south route, and Highway 95, an east-west route. The closest large cities are Eau Claire to the north and La Crosse to the south. Whitehall, the county seat, is seven miles away. The rural area surrounding Blair is in the Town of Preston. Nearby communities include Taylor, Arcadia, Independence, Hixton, and Galesville.

The Trempealeau River near Blair was dammed to create Lake Henry, named after one of the first settlers.

Blair is in the Driftless Area, which was undisturbed by the last great glacial flow over North America. The area is also known as the Coulee Region, characterized by rolling hills. The forested hills are favored by deer hunters. Pheasants and grouse are also hunted. Local streams are fished for trout, which are stocked.

There were 571 households, of which 30.1% had children under the age of 18 living with them, 41.2% were married couples living together, 8.9% had a female householder with no husband present, 5.8% had a male householder with no wife present, and 44.1% were non-families. 37.3% of all households were made up of individuals, and 18.1% had someone living alone who was 65 years of age or older. The average household size was 2.27 and the average family size was 2.97.

The local festival is the Cheese Fest, which takes place annually in mid-September. A city park and municipal swimming pool are located along Lake Henry. Blair has two Lutheran churches and one Catholic church.

Blair has a bank and a Dollar General store, also a Kwik-Trip. The local post office provides box service only. The local newspaper used to be The Blair Press.until it closed in 2019 when the owner died. The city's creamery, operated by the Associated Milk Producers, processes milk and produces cheese. In the past, Colby cheese was a staple, distributed by the Kraft company. The city's largest employers are the Public schools, Sand Mines, AMPI, and Grandview a Nursing home. Blair is also home to Countryside Lefse Company.

All content from Kiddle encyclopedia articles (including the article images and facts) can be freely used under Attribution-ShareAlike license, unless stated otherwise. Cite this article:
Blair, Wisconsin Facts for Kids. Kiddle Encyclopedia.