The ancient 'Kynges Towne' of Brading is the main town of the civil parish of the same name. The ecclesiastical parish of Brading used to cover about a tenth of the Isle of Wight. The civil parish now includes the town itself and Adgestone, Morton, Nunwell and other outlying areas between Ryde, St Helens, Bembridge, Sandown and Arreton. Alverstone was transferred to the Newchurch parish some thirty years ago.

From early times, Brading ranked as an important Island port. The ancient name of Brerdynge, from which 'Brading' is derived, probably meant the people living by the ridge of the Downs, and dates from at least 683.

The Roman Villa south of the town, and Roman relics discovered locally, indicate that this was an important seaport 2,000 years ago. Signs of prehistoric activity have also been found on Brading Down.

History records that St Wilfrid came to the island during the 680s, landed at Brading, preached there to the islanders, and began the conversion of the Island. Bede states that King Caedwalla of Wessex killed the pagan population "mercilessly" and replaced them with his own Christian followers, dedicating a quarter of the Isle of Wight to Wilfrid and the Church. Wilfrid would thus have been literally preaching to the converted because everyone else was dead. This legend was illustrated by a tableau at the Waxworks.

Brading was first granted a charter in 1280, unusually for the time directly from King Edward I, rather than the Lord of the Isle (who was its private owner). This led to it being known as the 'King's Town'.

The charter granted to Brading by Edward VI in 1548 refers to the previous charter granted by Edward I. This charter allowed the town to hold two annual fairs. Nowadays the fair is called Brading Day and is held over the first weekend in July.

Because of its status as a town, Brading has a mayor and an elected town council.

In medieval times the town was governed by the Steward, Bailiffs and 13 Jurats, and returned two MPs to the Westminster Parliament. Now the town is a part of the Isle of Wight parliamentary constituency.

Until the 16th century the port was active. Ships lay alongside at the quay behind the Bugle Inn in the High Street. Ships came into Brading Haven for shelter and for provisions, particularly water, which was of a high quality. The north-eastern part of the haven was closed off by an embankment completed in 1594, much of which is still present. Ships would then tie up at the far end of Quay Lane on the other side of the embankment.

Throughout the Middle Ages various attempts were made to drain off the rest of the harbour; for it had gradually become silted up and, except for the main channel of the river, was too shallow to be of any commercial use. Sir Hugh Myddleton, who had constructed the New River from Enfield to central London for James I, undertook this work; but the sea broke in and flooded the land once again. After others had also tried and failed, this reclamation was finally accomplished in 1881 by the building of a substantial embankment right across the harbour, with the building of the railway to Bembridge.

So Brading now shares with Winchelsea and Romney the distinction of being a seaport without any sea. Losing access to the sea caused Brading to decline in importance and prevented the sort of growth enjoyed by Cowes and Newport. 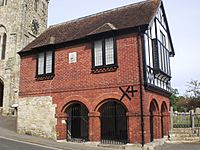 A historic Old Town Hall stands near to the church. The New Town Hall dates from 1903. There is no record of the earliest Town Hall, but an entry in The Court Leet Book 1729 refers to the assessment of one shilling rate, and also a subscription towards building a new Town Hall, Market House and Prison. In 1730 an extra 3d was added to the rate for the Town Hall.

This new building remained until 1876 when it was restored to its present state, and then contained the Free Town Library. Before the building of the first school in 1823, the children were taught in the Town Hall, and it was also used for Mother's Meetings. The Town Trust now owns the building.

Brading was formerly the testing place for weights & measures for all of East Wight and these standards are still kept in the upper building together with the Town Charter.

The Statue adjacent to the Bull Ring.

Set in the ground outside the new Town Hall (1903), there is an iron bullring which was once used to secure a bull whilst it was being baited by dogs. According to the diaries of Sir John Oglander, the Governor of the Isle of Wight would donate 5 guineas for the purchase of the bull to be baited; the meat was afterwards donated to the poor of the town. The Mayor attended this ceremony in full regalia and a dog, known as the Mayor's Dog, would be decked with coloured ribbons and set on the bull after the proclamation had been made. A large wooden carving of a bull decorates the Bullring. This is by local artist Paul Sivell. Another of his works is an approximately 10-foot wooden statue of the goddess Diana positioned in the woods above Brading at Kelly's Copse entitled "For Camilla".

The town possesses a gun. It is a brass piece, made in 1549 by the Owine Brothers, John and Robert, so that the town might be defended from French invasion. The gun was never used in action, but was taken to the top of Brading Down in 1832 so that it could be fired to celebrate the passing of the Reform Bill. Unfortunately it exploded and split, putting a stop to celebrations for the day. In the 1950s, it was stolen from the "Gunne House" behind St. Mary's Church and was found in a sale room in Kent. It was returned, however, not to the town, but to the Oglanders at Nunwell House, where it remains beneath Fanny Oglander's bedroom window. The Town Trust has asked for it back, but Fanny Oglander has said that security arrangements should be improved and the matter remains unresolved.

The southern half of the town is designated as an "Area of Outstanding Natural Beauty". There are two Sites of Important Nature Conservation close to Morton and another on the downs.

Brading Down is a popular viewpoint and downland beauty spot, with impressive views over Culver Down and Sandown Bay. From the north side of the hill you can look over the town towards the mainland. From further up you can see the Solent and the Spinnaker Tower at Portsmouth. This elevated site is also of great archaeological importance, with prehistoric, Roman and mediaeval remains, as well as practice trenches from the first world war.

The Brading Marshes nature reserve is the first Royal Society for the Protection of Birds reserve on the Isle of Wight. Situated on the reclaimed land of the old harbour, behind the present-day Bembridge Harbour, it was bought in 2001 and is a mix of lagoons and ditches, reed beds and meadows, with a fringe of ancient woodland.

Brading is served by Brading railway station on the Island Line Railway with direct connection to the Wightlink ferry at Ryde Pier Head and stops at Ryde, Smallbrook, Sandown, Lake and Shanklin. The southern fringes of Brading are also on the Island's circular cycle route used for the annual "Bicycle Island Randonée".

The main A3055 road from Ryde to Sandown passes through the town.

The town is well-connected to the surrounding countryside by footpaths and bridleways. The Bembridge Trail passes through the town along Doctors Lane, Cross Street, High Street and Quay Lane (Wall Lane) then along the top of the embankment to St Urian's Copse. There are 71 other footpaths, by-ways and bridle paths in the civil parish area and organised parties of walkers may often be seen meeting at the station or the Bullring.

Southern Vectis run buses on route 3 from the town, serving Newport, Ryde, Sandown, Shanklin and Ventnor, and some other places. Night buses are run at weekends.

Features of the town 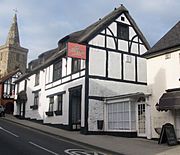 The former Brading Waxworks in August 2010. 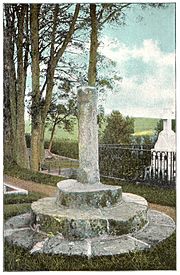 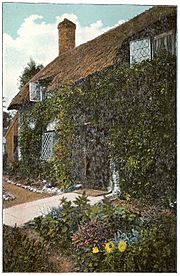 Little Jane's Cottage, Brading, circa 1910 – alluded to by the Rev Legh Richmond

The main street of Brading contains most of the facilities expected of a large village, or in Brading's case, small town. There are four pubs; The Bugle Inn where the sea almost met the High Street when Brading Haven was a major port, the Wheatsheaf Inn which faces the Bull Ring, The Kynges Well (formerly the Dark Horse) which is on the High Street and one at nearby Yarbridge named the Yarbridge Inn (known for many years as the Anglers Inn) which is famous for its selection of real ales. St. Mary's Church, Brading is at the north end of the town and the Methodist chapel is near the centre. There is a small supermarket, a post office, a newsagent, several other specialist shops,a hairdresser's and a fish and chip shop. In addition to these facilities, there is Brading Primary School.

Brading has many attractions to tempt the visitor, quite apart from the natural beauty of the area. These include the Lilliput Doll and Toy Museum; The Roman Villa at Morton with its protective cover (new in 2004) and interpretation centre.

Another notable town attraction was the Brading Waxworks, a museum and waxworks exhibition housed in a Tudor pub (named the "Crown") built by Germaine Richardes who victualled the English fleet. The waxworks first opened in 1965, under the ownership of Graham Osborn-smith. It was renamed 'Brading: The Experience' by new owners in 2005, and further alterations in the same year saw the construction of a new section entitled 'World of Wheels', which displayed an array of vintage and unusual vehicles. However, the attraction announced its closure in late 2009 as a result of falling visitor numbers and the increasing costs of running and maintaining the site. It was closed for good on 3 January 2010, and most of the vast collection of taxidermy pieces, historical artefacts and vehicles was auctioned off in April 2010. Two of the waxworks tableaux: Valentine Grey, the little sweep; and "The Skivvy" are on display in the building which is now a visitor centre with shops and food outlets.

Brading has a Non-League football club Brading Town F.C., which plays at The Peter Henry Ground.

One of the town's claims to fame is that the boards used in churches all over the world to display hymn numbers were invented here by the Rev Legh Richmond, who was curate-in-charge of Brading and Yaverland 1757 to 1805, and a famous writer of inspirational evangelist pamphlets at that time.

Brading, fictionalised as "Barling", is the central location of Maxwell Gray's 1899 novel The House of Hidden Treasure.

The Victorian diarist Francis Kilvert visited Brading on the day of John Oglander's funeral and recorded details of his visit to Brading in his diary.

"Brading" was a brand of beer in northern Ontario, Canada, now no longer manufactured.

All content from Kiddle encyclopedia articles (including the article images and facts) can be freely used under Attribution-ShareAlike license, unless stated otherwise. Cite this article:
Brading Facts for Kids. Kiddle Encyclopedia.