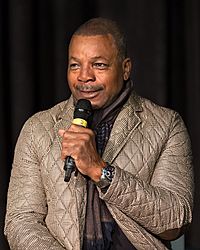 Carl Weathers (born January 14, 1948) is an American actor and former professional football player. He is best known for portraying Apollo Creed in the Rocky, Al Dillon in Predator, Chubbs Peterson in Happy Gilmore and Little Nicky, and as himself on the comedy series Arrested Development.

As a football player, Weathers played for the Oakland Raiders of the National Football League and the B.C. Lions of the Canadian Football League. He was born in New Orleans, Louisiana.

All content from Kiddle encyclopedia articles (including the article images and facts) can be freely used under Attribution-ShareAlike license, unless stated otherwise. Cite this article:
Carl Weathers Facts for Kids. Kiddle Encyclopedia.