Carnesville is a city in Franklin County, Georgia, United States, and the county seat. The population was 577 at the 2010 census.

Carnesville was founded in 1805 as the seat of Franklin County. It was incorporated as a town in 1819 and as a city in 1901. The town is named after Judge Thomas P. Carnes, a lawyer and congressman of the Revolutionary War era.

Carnesville is located in the center of Franklin County in northeastern Georgia. Interstate 85 passes northwest of the city, with access from Exits 164 and 166. I-85 leads southwest 85 miles (137 km) to Atlanta and northeast 62 miles (100 km) to Greenville, South Carolina.

According to the United States Census Bureau, Carnesville has a total area of 2.6 square miles (6.8 km2), of which 0.02 square miles (0.06 km2), or 0.86%, is water. Carnesville is situated in the watershed of the Broad River, a tributary of the Savannah River. 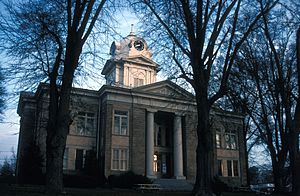 The Franklin County Courthouse is one of twelve sites in Carnesville listed on the National Register of Historic Places.

There were 197 households, of which 26.9% had children under the age of 18 living with them, 45.7% were married couples living together, 18.3% had a female householder with no husband present, and 33.0% were non-families. 31.5% of all households were made up of individuals, and 20.3% had someone living alone who was 65 years of age or older. The average household size was 2.43 and the average family size was 3.05.

In April 2013, Mayor Harris Little expressed concern over the number of American turkey vultures in Carnesville, and how the U.S. Migratory Bird Act prevented locals from killing them.

The Franklin County School District holds pre-school to grade twelve, and consists of four elementary schools, a middle school, and a high school. The district has 232 full-time teachers and over 2,732 students.

All content from Kiddle encyclopedia articles (including the article images and facts) can be freely used under Attribution-ShareAlike license, unless stated otherwise. Cite this article:
Carnesville, Georgia Facts for Kids. Kiddle Encyclopedia.