The Cedar Mountain Formation is the name given to a distinctive sedimentary geologic formation in eastern Utah. The formation was named for Cedar Mountain in northern Emery County, Utah, where William Lee Stokes first studied the exposures in 1944. 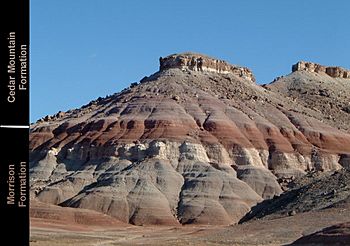 It is composed of non-marine sediments, that is, sediments deposited in rivers, lakes and on flood plains. Based on various fossils and radiometric dates, the Cedar Mountain Formation was deposited during the last half of the Early Cretaceous Epoch, about 127 - 98 million years ago (mya).

It has lithography similar to the Burro Canyon Formation in the region.

Dinosaur fossils occur throughout the formation, but their study has only occurred since the early 1990s. The dinosaurs in the lower part of the formation differ from those in the upper part. These two dinosaur assemblages, characterized by distinct dinosaurs, show the replacement of older, European-like dinosaurs with younger, Asian-like dinosaurs as the North American Continental Plate drifted westward. A middle dinosaur assemblage may be present, but the fossil record is not clear.

Although not part of the Cedar Mountain Formation, the Naturita Formation immediately overlies the Cedar Mountain and marks the encroaching Western Interior Seaway. The Naturita is not uniformly distributed and was eroded away in places by the advancing Seaway so that the marine shales of the Mancos Formation lay directly on the Mussentuchit or its equivalent. The name Dakota Formation has been improperly used for these strata. 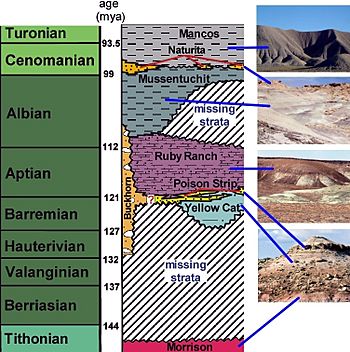 Stratigraphic column showing the various members that make up the Cedar Mountain Formation and their approximate geologic age.
Missing strata either were not deposited or were deposited, but later eroded.

Only recently did the 125 m (410 ft) thick formation get subdivided into smaller, distinctive beds called members. There is a debate as to whether there are five members or four depending whether the Buckhorn Conglomerate is considered to be at the top of the Morrison Formation or at the base of the Cedar Mountain Formation; most geologists and paleontologists consider it part of the Cedar Mountain Formation. In ascending order the remaining members are the Yellow Cat Member, Poison Strip Sandstone, Ruby Ranch Member, and the Mussentuchit Member. Each of these members are named after a geographic area where they were first studied.

The Cedar Mountain Formation is proving to contain one of the richest and most diverse Early Cretaceous dinosaur faunas in the world. The discoveries to date have revealed that the origin of some of the later Cretaceous dinosaurs may lie in the Cedar Mountain, but further work is needed to understand the timing and effects the changing position of the North American Plate had on dinosaurian evolution. Also needed is a better understanding of the effects that the changing North American Plate had on the non-dinosaur vertebrates. 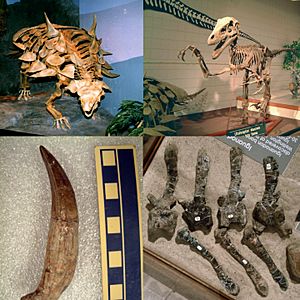 The Cedar Mountain Formation is one of the last major dinosaur-bearing formations to be studied in the United States. Although sporadic bone fragments were known prior to 1990, serious research did not begin until that year. Since then, several organizations have conducted field work collecting dinosaurs, chiefly the Oklahoma Museum of Natural History, the Denver Museum of Nature & Science, the College of Eastern Utah, the Utah Geological Survey, Brigham Young University, and Dinosaur National Monument staff. This research indicates that at least two, possibly three dinosaur assemblages are contained within the formation.

The oldest of these assemblages is from the Yellow Cat, Poison Strip and basal Ruby Ranch members. The small, Ornitholestes-like theropod Nedcolbertia and the brachiosaurid sauropod Cedarosaurus may be considered as relics, with their closest relatives in the Morrison Formation. In contrast, the polacanthid ankylosaur Gastonia and a yet unnamed iguanodontid are similar to related forms from the Lower Cretaceous of southern England. These dinosaurs show that the connection between North America and Europe still existed during the Barremian. All of this changes, however, with the upper dinosaur assemblage from the top of the Ruby Ranch and Mussentuchit members. This upper assemblage shows greater similarities with Asian dinosaur assemblages from the same time. For example, the primitive ankylosaurid Cedarpelta is related to Gobisaurus and Shamosaurus from Mongolia, but is more primitive than either because it has teeth in the premaxilla. The upper assemblage also has a tyrannosaurid, a ceratopsian, and a pachycephalosaur. Although not a dinosaur, the primitive mammal Gobiconodon is known from both Mongolia and the Mussentuchit Member. Evidence for a middle dinosaur assemblage between the older and younger ones is controversial because the evidence mostly depends on a single specimen of the ornithopod Tenontosaurus from high in the Ruby Ranch Member and the sauropod Astrodon from low in the Ruby Ranch. Regardless, the upper and lower dinosaur assemblages in the Cedar Mountain Formation document the separation of North America and Europe, the westward drift of North America, and its connection with Asia 10 to 15 million years later. 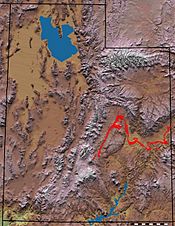 Map of Utah showing the location of the Cedar Mountain Formation (red). The San Rafael Swell is the dome-like structure that the formation jogs around. Base map data courtesy of geodata.gov

Besides dinosaurs, the Cedar Mountain Formation has produced a wealth of small fossils (a.k.a. microfossils), mostly teeth from a variety of vertebrates. Most of these specimens have been found in the Mussentuchit Member where they are collected by washing the rock through fine window screen. The teeth and other small fossils are picked from the residue.

The various vertebrates are listed by member in the list below.

Non-vertebrate fossils are more widely distributed in the Cedar Mountain Formation. These include the distinctive reproductive structures of fresh water algae that are called charophytes. Charophytes are so distinctive that they are used to correlate strata of similar age, and thus were used to show that the Yellow Cat Member was time equivalent to Barremian age strata in England. Ostracods, small crustaceans with clam-like shells, also occur in fresh water deposits, along with "finger-clams" or chonchostracans. Pollen have been found in the Mussentuchit Member and are important for reconstructing the environment. In a few places, large petrified logs are known, especially from the Poison Strip. These conifer logs are over a meter in diameter and indicate the presence of trees over 30 m (100 feet). The distinct wood of the tree fern Tempskya is occasional found as well.

A new genus and species of orectolobid present in the Mussentuchit Member.

All content from Kiddle encyclopedia articles (including the article images and facts) can be freely used under Attribution-ShareAlike license, unless stated otherwise. Cite this article:
Cedar Mountain Formation Facts for Kids. Kiddle Encyclopedia.