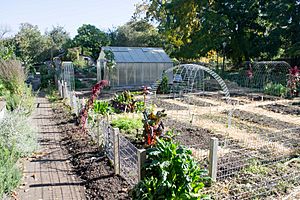 The Urban Farm at the University of Oregon

City farming, also called urban farming, is growing a kitchen garden (French: potager) in a city. This has been practiced as long as there have been cities. Other names include "pea-patching", victory gardening and foodscaping.

Food is grown in a city setting for the use of an individual or family as well as for the community. This is not the same as the back-to-the-land movements of the 1970s. It is mainly about the little family farm inside the city. Land use in cities is subject to local land laws. Where permitted city farms may be anything from small window boxes to shared community gardens. Urban farmers can grow food for their own use. They can also sell excess crops directly to stores or at a farmers' market. City farms can also be nonprofit operations that grow food for poor and homeless people.

Many city farms grow organic foods. These are from plants that do not use chemical fertilizers or pesticides. City farming also includes food growing cooperatives. They provide the opportunity to get involved in agriculture in their own city. In Brisbane, Australia a community group took a 4 hectares (9.9 acres) city park that flooded regularly and changed it to an organic city farm. Called Northey Street City Farm, people of all ages and backgrounds work together to grow food. Fruits, vegetables, herbs and flowers are grown. Ponds were introduced to attract beneficial insects, frogs and birds which help in pest control.

City farming allows people to save money growing and harvesting their own food. It allows many individuals and families to make an income selling the food they grow. It helps the cities by recycling organic waste into compost and soil. It takes vacant lots and turns them into green spaces.

Shared garden space or community gardens provide a sense of working together. People, especially children, learn stewardship (planning and managing resources). Kids learn responsiblity and work ethics. They are also eager to try new foods when they see them grown in their own gardens. In some countries, gardens are grown on rooftops or on pavement. In some places land around public schools is made available for gardens. This benefits the school by providing food for school lunches. It also allows children to learn about growing their own food. 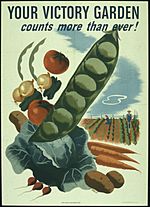 Victory gardens were city farms that sprang up during World War I and World War II. There were food shortages in the United States, the United Kingdom, Canada, Australia and Germany. In the US alone, victory gardens provided 40% of the produce used during World War II. In addition to farms, gardens were grown in window boxes, rooftops, back yards and vacant yards. Victory gardens gave the people at home a sense of doing their part for the war effort. Women in England tended to grow ornamental gardens. This made for an easy shift towards food gardening. Women in the US had a cultural identity with the British and also grew ornamental gardens. But there were stereotypes to working in agricultural jobs in the US. But these were quickly overcome. Victory gardens were not uncommon even among upper classes in America.

All content from Kiddle encyclopedia articles (including the article images and facts) can be freely used under Attribution-ShareAlike license, unless stated otherwise. Cite this article:
City farming Facts for Kids. Kiddle Encyclopedia.