City of Swan facts for kids

The City of Swan is a local government area of Western Australia. It is in the eastern metropolitan region of Perth and includes the Swan Valley and 42 suburbs. It is centred approximately 20 km north-east of the Perth central business district. The City covers an area of 1,042 km² (which is 19.4% of the Perth Metro area) and had an estimated population of 155,653 in 2020.

32.7% of the City of Swan population was born overseas, compared with 36.1% for Greater Perth.

The largest non-English speaking country of birth in the City of Swan was India, where 3.1% of the population, or 4,163 people, were born.

The City of Swan began as three entities:

On 1 July 2016 the portion of Noranda north of Widgee Road was transferred to the City of Bayswater.

The City of Swan is divided into 7 wards, most of which have three Councillors: 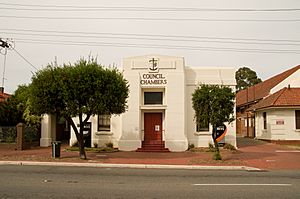 The populations of the City of Swan's antecedents were:

The post-1970 populations of the combined Shire/City of Swan were:

All content from Kiddle encyclopedia articles (including the article images and facts) can be freely used under Attribution-ShareAlike license, unless stated otherwise. Cite this article:
City of Swan Facts for Kids. Kiddle Encyclopedia.