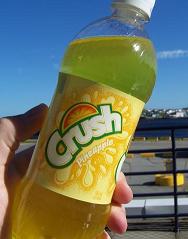 A bottle of Pineapple Crush

Crush is a soft drink made by the Dr Pepper Snapple Group.

Crush was founded in 1911 with Clayton Howell and Neil Ward when they began working together on the project. After many attempts, Ward had made the process of mixing the ingredients to make the all-natural taste of Orange Crush. Howell had already made his own drink, Howell’s Orange Julep, as soft drinks usually were named after the maker and the drink name. In this case, Crush was released under the name Ward's Orange Crush. In fact, the company who made Orange Crush drink added orange pulp to the drink to make drinkers think that it was made from fresh squeezed oranges. However, pulp has not been in the drink for the past few decades.

All content from Kiddle encyclopedia articles (including the article images and facts) can be freely used under Attribution-ShareAlike license, unless stated otherwise. Cite this article:
Crush (drink) Facts for Kids. Kiddle Encyclopedia.