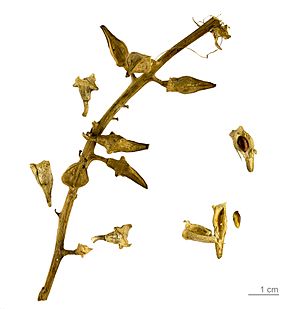 Cakile maritima, the European searocket, is a common plant in the mustard family. It is widespread in Europe, North Africa and western Asia, especially on coastlines. It can now be found in many other areas of the world where it has been introduced. It is an inhabitant of the west and east coasts of North America, where it has the potential to become a noxious weed. This is an annual plant which grows in clumps or mounds in the sand on beaches and bluffs. The shiny leaves are fleshy, green and tinted with purple or magenta, and long-lobed. It has white to light purple flowers and sculpted, segmented, corky brown fruits one to three centimeters long. The fruits float and are water-dispersed.

It is a glabrous, succulent annual, with a slender or stout taproot. It has a branched stem prostrate or ascending, growing up to 15–45 cm (5.9–17.7 in). The lobed leaves, are flesh-like and alternate (spaced), they are different from top and bottom of the stem, the lower leaves are obovate or oblancelate, while the upper ones are oblong. It blooms in the UK, between June and August. The small flowers come in shades of white, lilac-coloured or purple, with 4 petals measuring up to 25 mm (0.98 in) across. Later it produces green maturing to brown, seed capsules (fruit), that are short and stubby. They contain 2 yellow, brown, smooth seeds. The seed oil contains a high level of erucic acid.

Due to its highly efficient antioxidant system, it can withstand even high doses of Cadmium pollution.

The specific epithet maritima, refers to the Latin term for 'of the sea'. 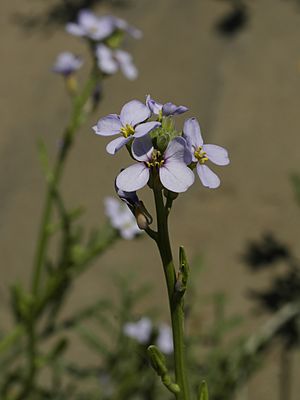 It grows on the foreshores near large dune systems, and in shingle banks. It is tolerant of salt spray and transient seawater inundation. It is pollinated by a wide range of insects, from Apis mellifera, Eristalis intricarius and Pieris rapae.

As the seed oil contains a high level of erucic acid it can have pathological effects on the cardiac muscle of several animal species. However, orange-bellied parrots feed on its seed during their northward migrating journey from Tasmania and Australia.

The leaves are edible, preferably cooked, and not eaten in great quantity. The seed oil can be used for industrial applications.

All content from Kiddle encyclopedia articles (including the article images and facts) can be freely used under Attribution-ShareAlike license, unless stated otherwise. Cite this article:
European searocket Facts for Kids. Kiddle Encyclopedia.