Fauna of India facts for kids 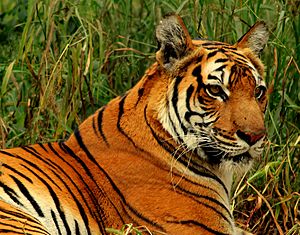 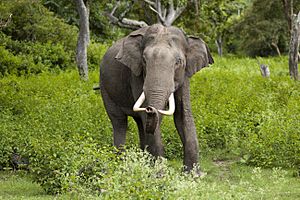 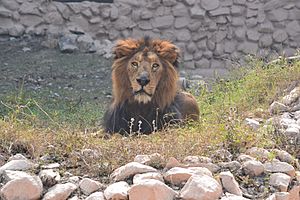 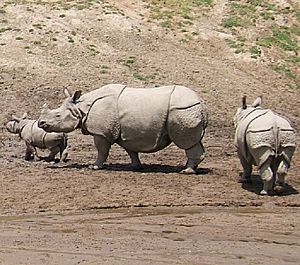 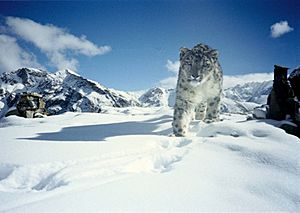 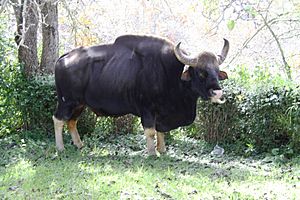 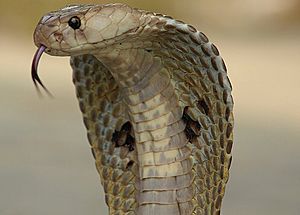 Indian cobra
Elephas ganesa a fossil elephant from the Siwaliks

Illustration of a Himalayan quail from A. O. Hume's work. Last seen in 1876 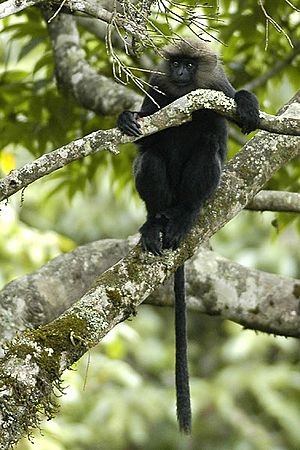 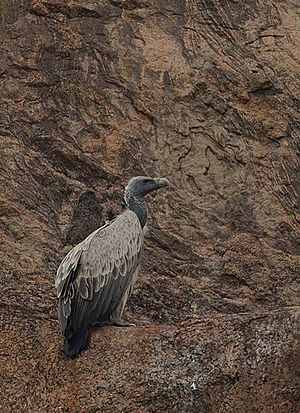 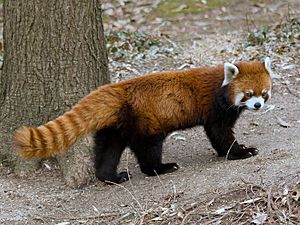 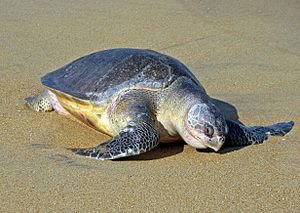 India has some of the world's most biodiverse regions. The political boundaries of India encompass a wide range of biomes–desert, high mountains, highlands, tropical and temperate forests, swamplands, plains, grasslands, areas surrounding rivers, as well as island archipelago. It hosts 4 biodiversity hotspots: the Himalayas, the Western Ghats, the Indo-Burma region and the Sundaland (Includes group of Islands). These hotspots have numerous endemic species.

India, for the most part, lies within the Indomalayan realm, with the upper reaches of the Himalayas forming part of the Palearctic realm; the contours of 2000 to 2500m are considered to be the altitudinal boundary between the Indo-Malayan and Palearctic zones. India displays significant biodiversity. One of seventeen megadiverse countries, it is home to 7.6% of all mammalian, 12.6% of all avian, 6.2% of all reptilian, 4.4% of all amphibian, 11.7% of all fish, and 6.0% of all flowering plant species.

The region is also heavily influenced by summer monsoons that cause major seasonal changes in vegetation and habitat. India forms a large part of the Indomalayan biogeographical zone and many of the floral and faunal forms show Malayan affinities with only a few taxa being unique to the Indian region. The unique forms includes the snake family Uropeltidae found only in the Western Ghats and Sri Lanka. Fossil taxa from the Cretaceous show links to the Seychelles and Madagascar chain of islands. The Cretaceous fauna include reptiles, amphibians and fishes and an extant species demonstrating this phylogeographical link is the purple frog. The separation of India and Madagascar is traditionally estimated to have taken place about 88 million years ago. However, there are suggestions that the links to Madagascar and Africa were present even at the time when the Indian subcontinent met Eurasia. India has been suggested as a ship for the movement of several African taxa into Asia. These taxa include five frog families (including the Myobatrachidae), three caecilian families, a lacertid lizard and freshwater snails of the family Potamiopsidae. A thirty million year old Oligocene-era fossil tooth from the Bugti Hills of central Pakistan has been identified as from a lemur-like primate, prompting controversial suggestions that the lemurs may have originated in Asia. Lemur fossils from India in the past led to theories of a lost continent called Lemuria. This theory however was dismissed when continental drift and plate tectonics became well established.

The flora and fauna of India have been studied and recorded from early times in folk traditions and later by researchers following more formal scientific approaches (See Natural history in India). Game laws are reported from the third century BC.

A little under 5% of this total area is formally classified under protected areas.

India is home to several well-known large mammals, including the Asian elephant, Bengal tiger, Asiatic lion, leopard and Indian rhinoceros. Some of these animals are engrained in culture, often being associated with deities. These large mammals are important for wildlife tourism in India, and several national parks and wildlife sanctuaries cater to these needs. The popularity of these charismatic animals have helped greatly in conservation efforts in India. The tiger has been particularly important, and Project Tiger, started in 1972, was a major effort to conserve the tiger and its habitats. Project Elephant, though less known, started in 1992 and works for elephant protection. Most of India's rhinos today survive in the Kaziranga National Park. Some other well-known large Indian mammals are: ungulates such as the water buffalo, nilgai, gaur and several species of deer and antelope. Some members of the dog family such as the Indian wolf, Bengal fox, golden jackal and the dhole or wild dogs are also widely distributed. It is also home to the striped hyaena. Many smaller animals such as macaques, langurs and mongoose species are especially well known due to their ability to live close to or inside urban areas Adhu.

There is insufficient information about the invertebrate and lower forms of India, with significant work having been done only in a few groups of insects, notably the butterflies, odonates, hymenoptera, the larger biodiversity have been made since the publication of The Fauna of British India, Including Ceylon and Burma series.

There are about 1,250 species of birds from India, with some variations, depending on taxonomic treatments, accounting for about 12% of the world species.

There are about 410 species of mammals known from India, which is about 8.86% of the world species.

India has the greatest number of cat species of any other country.

The World Conservation Monitoring Centre gives an estimate of about 15,000 species of flowering plants in India.

The Western Ghats are a chain of hills that run along the western edge of peninsular India. Their proximity to the ocean and through orographic effect, they receive high rainfall. These regions have moist deciduous forest and rain forest. The region shows high species diversity as well as high levels of endemism. Nearly 77% of the amphibians and 62% of the reptile species found here are found nowhere else. The region shows biogeographical affinities to the Malayan region, and the Satpura hypothesis proposed by Sunder Lal Hora suggests that the hill chains of Central India may have once formed a connection with the forests of northeastern India and into the Indo-Malayan region. Hora used torrent stream fishes to support the theory, but it was also suggested to hold for birds. Later studies have suggested that Hora's original model species were a demonstration of convergent evolution rather than speciation by isolation.

More recent phylogeographic studies have attempted to study the problem using molecular approaches. There are also differences in taxa which are dependent on time of divergence and geological history. Along with Sri Lanka this region also shows some fauna similarities with the Madagascan region especially in the reptiles and amphibians. Examples include the Sinophis snakes, the purple frog and Sri Lankan lizard genus Nessia which appears similar to the Madagascan genus Acontias. An alternate hypothesis that these taxa may have originally evolved out-of-India has also been suggested.

Bio geographical quirks exist with some taxa of Malayan origin occurring in Sri Lanka but absent in the Western Ghats. These include insects groups such as the plants such as those of the genus Nepenthes.

During the early Tertiary period, the Indian tableland, what is today peninsular India, was a large island. Prior to becoming an island, it was connected to the African region. During the tertiary period, this island was separated from the Asian mainland by a shallow sea. The Himalayan region and the greater part of Tibet lay under this sea. The movement of the Indian subcontinent into the Asian landmass created the great Himalayan ranges and raised the sea bed into, what is today, the plains of northern India.

Once connected to the Asian mainland, many species moved into India. The Himalayas were created in several upheavals. The Siwaliks were formed at the last and the largest number of fossils of the Tertiary period are found in these ranges.

Many fossil tree species have been found in the intertrappean beds ,including Grewioxylon from the Eocene and Heritieroxylon keralensis from the middle Miocene in Kerala and Heritieroxylon arunachalensis from the Mio-Pliocene of Arunachal Pradesh and at many other places. The discovery of Glossopteris fern fossils from India and Antarctica led to the discovery of Gondwanaland and led to the greater understanding of continental drift. Fossil Cycads are known from India while seven Cycad species continue to survive in India.

Titanosaurus indicus was perhaps the first dinosaur discovered in India by Richard Lydekker in 1877 in the Narmada valley. This area has been one of the most important areas for paleontology in India. Another dinosaur known from India is Rajasaurus narmadensis, a heavy-bodied and stout carnivorous abelisaurid (theropod) dinosaur that inhabited the area near present-day Narmada river. It was 9 m in length and 3 m in height and somewhat horizontal in posture with a double-crested crown on the skull.

Some fossil snakes from the Cenozoic era are also known.

Some scientists have suggested that the Deccan lava flows and the gases produced were responsible for the global extinction of dinosaurs. However, these have been disputed.

Himalayacetus subathuensis ,the oldest-known whale fossil of the family Protocetidae (Eocene), about 53.5 million years old was found in the Simla hills in the foothills of the Himalayas. This area was underwater (in the Tethys sea) during the Tertiary period (when India was an island off Asia). This whale may have been capable of living partly on land.

The exploitation of land and forest resources by humans along with hunting and trapping for food and sport has led to the extinction of many species in India in recent times.

Probably the first species to vanish during the time of the Indus Valley civilisation was the species of wild cattle, Bos primegenius nomadicus or the wild zebu, which vanished from its range in the Indus valley and western India, possibly due to inter-breeding with domestic cattle and resultant fragmentation of wild populations due to loss of habitat.

Notable mammals which became or are presumed extinct within the country itself include the Indian / Asiatic cheetah, Javan rhinoceros and Sumatran rhinoceros. While some of these large mammal species are confirmed extinct, there have been many smaller animal and plant species whose status is harder to determine. Many species have not been seen since their description. Hubbardia heptaneuron, a species of grass that grew in the spray zone of the Jog Falls prior to the construction of the Linganamakki reservoir, was thought to be extinct but a few were rediscovered near Kolhapur.

Some species of birds have gone extinct in recent times, including the pink-headed duck (Rhodonessa caryophyllacea) and the Himalayan quail (Ophrysia superciliosa). A species of warbler, Acrocephalus orinus, known earlier from a single specimen collected by Allan Octavian Hume from near Rampur in Himachal Pradesh was rediscovered after 139 years in Thailand. Similarly, the Jerdon's courser (Rhinoptilus bitorquatus), named after the zoologist Thomas C. Jerdon who discovered it in 1848, was rediscovered in 1986 by Bharat Bhushan, an ornithologist at the Bombay Natural History Society after being thought to be extinct.

An estimate of the numbers of species by group in India is given below. This is based on Alfred, 1998. 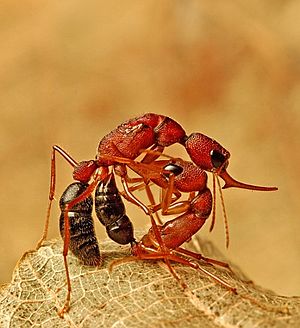 This section provides links to lists of species of various taxa found in India.

All content from Kiddle encyclopedia articles (including the article images and facts) can be freely used under Attribution-ShareAlike license, unless stated otherwise. Cite this article:
Fauna of India Facts for Kids. Kiddle Encyclopedia.