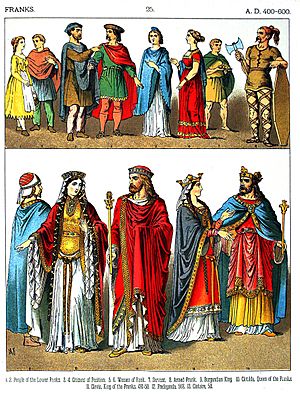 The Franks or the Frankish peoples were one of several west Germanic federations of tribes. It was formed out of Germanic tribes: Salians, Sicambri, Chamavi, Tencteri, Chattuarii, Bructeri, Usipetes, Ampsivarii, Chatti. Most of them lived at the northern borders of the Rhine.

They entered the late Roman Empire from the north and east river bank of the Rhine into modern northern Belgium and southern Netherlands. Later invasions conquered and established a lasting kingdom in an area which eventually covered most of modern-day France, Belgium, the Netherlands, and the western regions of Germany. When the pagan Frankish king Clovis became Christian in the late 5th century that was an important event in the history of Europe.

Modern scholars of the period of the migrations are in agreement that the Frankish confederacy emerged at the beginning of the third century. A region in the northeast of the modern-day Netherlands – north of the erstwhile Roman border – still bears the name Salland, and may have received that name from the Salians, who formed the core of the Frankish sea raiders.

From their heartland, the Franks gradually conquered most of Roman Gaul north of the Loire valley and east of Visigothic Aquitaine. At first they helped defend the border as allies; for example, when a major invasion of mostly East Germanic tribes crossed the Rhine in 406, the Franks fought against these invaders. In the region of Paris, Roman control persisted until 486, a decade after the fall of the emperors of Ravenna, in part due to alliances with the Franks.

In 451, Aëtius called upon his Germanic allies on Roman soil to help fight off an invasion by Attila the Hun. The Salian Franks answered the call; the Ripuarian Franks fought on both sides as some of them lived outside the Empire. The Merovingians had governors who lead the Franks to war and had many governing responsibilities.

The Carolingian kingship begins with the deposition of the last Merovingian king, and the accession in 751 of Pippin the Short, father of Charlemagne.

Pippin reigned as an elected king. While in later France the kingdom became hereditary, the kings of the later Holy Roman Empire proved unable to abolish the elective tradition and continued as elected rulers until the Empire's formal end in 1806.

In 768 Charlemagne (Charles the Great), a powerful, intelligent, and modestly literate figure who became a legend for the later history of both France and Germany. Charles restored an equal balance between emperor and pope.

From 772 onwards, Charles conquered and eventually defeated the Saxons to incorporate their realm into the Frankish kingdom. Then (773–774), he conquered the Lombards and thus could include northern Italy in his sphere of influence. He renewed the Vatican donation and the promise to the papacy of continued Frankish protection.

Charles created a realm that reached from the Pyrenees in the southwest (actually, including an area in Northern Spain (Marca Hispanica) after 795) over almost all of today's France (except Brittany, which the Franks never conquered) eastwards to most of today's Germany, including northern Italy and today's Austria. On Christmas Day, 800, Pope Leo III crowned Charles as "Emperor of the Romans" in Rome. Though Charles preferred the title "Emperor, king of the Franks and Lombards", as he did not want to get in conflict with the Byzantine Empire, the Frankish Empire became the successor of the (Western) Roman Empire. Charles died on January 28, 814 in Aachen, where was buried. 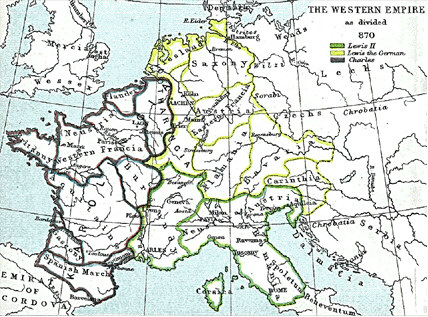 Charles' kingdom survived its founder and covered much of Western Europe from 795 until 843 when a treaty split it amongst his grandsons: Central Franks ruled by Lothair I (green), East Franks ruled by Louis the German (yellow), and Charles the Bald led West Franks (purple).

Charles had several sons, but only one survived him. This son, Louis the Pious, followed his father as the ruler of a united Empire. When Louis died in 840, the Treaty of Verdun in 843 divided the Empire in three:

All content from Kiddle encyclopedia articles (including the article images and facts) can be freely used under Attribution-ShareAlike license, unless stated otherwise. Cite this article:
Franks Facts for Kids. Kiddle Encyclopedia.