Geography of Romania facts for kids

With an area of 238,391 square kilometres (92,043 sq mi), Romania is the second biggest country in southeastern Europe. It is the twelfth-largest in Europe. A large part of Romania's border with Serbia and Bulgaria is made by the Danube. The Danube is joined by the Prut River. The Prut River makes the border with the Republic of Moldova. The Danube then flows into the area of the Black Sea inside of Romania, which forms the Danube Delta. The Danube Delta is the second biggest one of the best kept deltas in Europe. It is also a biosphere reserve and a biodiversity World Heritage Site. Some of the other major rivers in Romania are the Siret, which runs from the north to the south of Moldavia; the Olt, which runs from the Carpathian Mountains to Oltenia; and the Mureş, which runs through Transylvania from the east to the west.

The land in Romania is equally divided among mountainous, hilly and lowland areas. The Carpathian Mountains make up a big part of the center of Romania. 14 of its mountain ranges are taller than 2,000 meters. The tallest mountain in Romania is Moldoveanu Peak (2,544 metres (8,346 ft)).

The Danube is the longest river in Romania. It travels about 1,075 kilometers, almost 40% of its length, through Romania. Almost all of Romania's rivers are either direct or indirect tributaries of the Danube. The most important of these rivers are the Mureş River, the Olt River, the Prut, the Siret River, the Ialomiţa River, the Someş River, and the Argeş River.

The rivers of Romania flow either north, south, east, or west away from the Carpathians. Rain and other precipitation help add to the flow of water in each of the rivers and occasionally cause flooding. In the east, the water from the rivers are obtained by the Siret and Prut rivers. In the south, the rivers flow directly into the Danube. In the west, the rivers flow into the Tisza, which is in Hungary.

The Danube is the most important river in Romania. People use it for transportation and to make hydroelectric power from the rivers' flow of water. Boats and other watercraft are able to travel on nearly all of the places that the Danube flows in Romania. A problem that has occurred with using it for transportation is the fact that it is not very close by any of Romania's big industries.

Romania is in the southeastern part of Europe, where it borders the Black Sea and the Danube. The Carpathian mountains lie in the center. 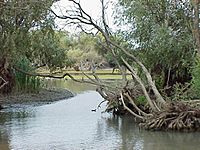 Landscape in the Danube Delta

Because of how far it is from the open sea and where it is in the southwestern part of the European continent, Romania has a climate that is changes between temperate and continental climates with four different seasons. The average yearly temperature is 11 °C in the south and 8 °C in the north. The extreme recorded temperatures are 44.5 °C in Ion Sion 1951 and -38.5 °C in Bod 1942.

Rain, snow, and other precipitation is decent with over 750 millimetres (30 in) per year on the highest western mountains. Most of this falls as snow, which gives Romania good skiing. In the south-centern parts of the country, the amount of rain and snow falls to around 600 millimetres (24 in),. In the Danube Delta, not much rain falls. The lowest temperature ever recorded in Romania was -38.5 °C, near Braşov in the year 1944. The highest temperature ever recorded in Romania was 44.5 °C, in Braila in August 1951.

All content from Kiddle encyclopedia articles (including the article images and facts) can be freely used under Attribution-ShareAlike license, unless stated otherwise. Cite this article:
Geography of Romania Facts for Kids. Kiddle Encyclopedia.