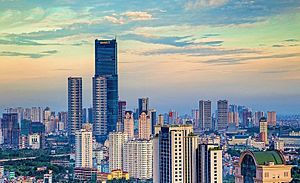 Things made there include machine tools, plywood, textiles, chemicals, and handicrafts.

Hanoi has been inhabited since at least 3000 BC. The Cổ Loa Citadel in Dong Anh district served as the capital of the Âu Lạc kingdom founded by the Shu emigrant Thục Phán after his 258 BC conquest of the native Văn Lang.

In 197 BC, Âu Lạc Kingdom was annexed by Nanyue, which ushered in more than a millennium of Chinese domination. By the middle of the 5th century, in the center of ancient Hanoi, the Liu Song Dynasty set up a new district (縣) called Songping (Tong Binh), which later became a commandery (郡), including two districts Yihuai (義懷) and Suining (綏寧) in the south of the Red River (now Từ Liêm and Hoài Đức districts) with a metropolis (the domination centre) in the present inner Hanoi. By the year 679, the Tang dynasty changed the region's name into Annan (Pacified South), with Songping as its capital.

In order to defeat the people's uprisings, in the later half of the 8th century, Zhang Boyi (張伯儀), a Tang dynasty viceroy, built Luocheng (羅城, La Thanh or La citadel, from Thu Le to Quan Ngua in present-day Ba Dinh precinct). In the earlier half of the 9th century, it was further built up and called Jincheng (金城, Kim Thanh or Kim Citadel). In 866, Gao Pian, the Chinese Jiedushi, consolidated and named it Daluocheng (大羅城, Dai La citadel, running from Quan Ngua to Bach Thao), the then-largest citadel of ancient Hanoi.

In 1010, Lý Thái Tổ, the first ruler of the Lý Dynasty, moved the capital of Đại Việt to the site of the Đại La Citadel. Claiming to have seen a dragon ascending the Red River, he renamed the site Thăng Long (昇龍, "Soaring Dragon") – a name still used poetically to this day. Thăng Long remained the capital of Đại Việt until 1397, when it was moved to Thanh Hóa, then known as Tây Đô (西都), the "Western Capital". Thăng Long then became Đông Đô (東都), the "Eastern Capital."

In 1408, the Chinese Ming Dynasty attacked and occupied Vietnam, changing Đông Đô's name to Dongguan (Chinese: 東關, Eastern Gateway), or Đông Quan in Sino-Vietnamese. In 1428, the Vietnamese overthrew the Chinese under the leadership of Lê Lợi, who later founded the Lê Dynasty and renamed Đông Quan Đông Kinh (東京, "Eastern Capital") or Tonkin. Right after the end of the Tây Sơn Dynasty, it was named Bắc Thành (北城, "Northern Citadel").

During Nguyễn Dynasty and the French colonial period 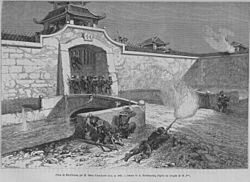 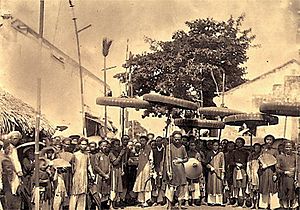 The stamp depicting election day in Hà Nội during French Indochina, around 1910 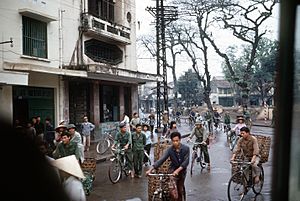 In 1802, when the Nguyễn Dynasty was established and moved the capital to Huế, the old name Thăng Long was modified to become Thăng Long (昇隆, "Soaring Dragon"). In 1831, the Nguyễn emperor Minh Mạng renamed it Hà Nội (河内, "Between Rivers" or "River Interior"). Hanoi was occupied by the French in 1873 and passed to them ten years later. As Hanoï, it was located in the protectorate of Tonkin became the capital of French Indochina after 1887.

The city was occupied by the Imperial Japanese in 1940 and liberated in 1945, when it briefly became the seat of the Viet Minh government after Ho Chi Minh proclaimed the independence of Vietnam. However, the French returned and reoccupied the city in 1946. After nine years of fighting between the French and Viet Minh forces, Hanoi became the capital of an independent North Vietnam in 1954.

During the Vietnam War, Hanoi's transportation facilities were disrupted by the bombing of bridges and railways. These were all, however, promptly repaired. Following the end of the war, Hanoi became the capital of a reunified Vietnam when North and South Vietnam were reunited on 2 July 1976.

On 29 May 2008, it was decided that Hà Tây Province, Vĩnh Phúc Province's Mê Linh District and 4 communes of Lương Sơn District, Hòa Bình Province be merged into the metropolitan area of Hanoi from 1 August 2008. Hanoi's total area then increased to 334,470 hectares in 29 subdivisions with the new population being 6,232,940., effectively tripling its size. The Hanoi Capital Region (Vùng Thủ đô Hà Nội), a metropolitan area covering Hanoi and 6 surrounding provinces under its administration, will have an area of 13,436 square kilometres (5,188 sq mi) with 15 million people by 2020.

Hanoi has experienced a rapid construction boom recently. Skyscrapers, popping up in new urban areas, have dramatically changed the cityscape and have formed a modern skyline outside the old city. In 2015, Hanoi is ranked # 39 by Emporis in the list of world cities with most skyscrapers over 100 m; its two tallest buildings are Hanoi Landmark 72 Tower (336 m, tallest in Vietnam and second tallest in southeast Asia after Malaysia's Petronas Twin Towers) and Hanoi Lotte Center (272 m, also, second tallest in Vietnam).

Hanoi is located in northern region of Vietnam, situated in the Vietnam's Red River delta, nearly 90 km (56 mi) away from the coastal area. Hanoi contains three basic kind of terrain, which are the delta area, the midland area and mountainous zone. In general, the terrain is gradually lower from the north to the south and from the west to the east, with the average height ranging from 5 to 20 meters above the sea level. The hills and mountainous zones are located in the northern and western part of the city. The highest peak is at Ba Vi with 1281 m, located west of the city proper. 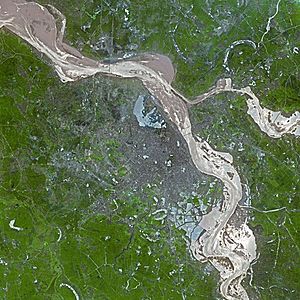 Hanoi features a warm humid subtropical climate (Köppen Cwa) with plentiful precipitation. The city experiences the typical climate of northern Vietnam, with 4 distinct seasons. Summer, from May until August, is characterized by hot and humid weather with abundant rainfall. September to October is fall, characterized by a decrease in temperature and precipitation. Winter, from November to January, is dry and cool by national standards. The city is usually cloudy and foggy in winter, averaging only 1.5 hours of sunshine per day in February and March.

Hanoi averages 1,680 millimetres (66.1 in) of rainfall per year, the majority falling from May to September. There are an average of 114 days with rain. 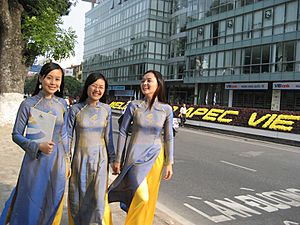 Hanoi's population is constantly growing (about 3.5% per year), a reflection of the fact that the city is both a major metropolitan area of Northern Vietnam, and also the country's political centre. This population growth also puts a lot of pressure on the infrastructure, some of which is antiquated and dates back to the early 20th century.

The number of Hanoians who have settled down for more than three generations is likely to be very small when compared to the overall population of the city. Even in the Old Quarter, where commerce started hundreds of years ago and consisted mostly of family businesses, many of the street-front stores nowadays are owned by merchants and retailers from other provinces. 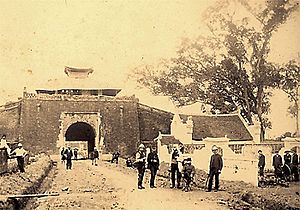 North gate of Hanoi Citadel from inside (19th century)

As the capital of Vietnam for almost a thousand years, Hanoi is considered one of the main cultural centres of Vietnam, where most Vietnamese dynasties have left their imprint. Even though some relics have not survived through wars and time, the city still has many interesting cultural and historic monuments for visitors and residents alike. Even when the nation's capital moved to Huế under the Nguyễn Dynasty in 1802, the city of Hanoi continued to flourish, especially after the French took control in 1888 and modeled the city's architecture to their tastes, lending an important aesthetic to the city's rich stylistic heritage. The city hosts more cultural sites than any other city in Vietnam, and boasts more than 1,000 years of history; that of the past few hundred years has been well preserved.

The Old Quarter, near Hoàn Kiếm Lake, maintains most of the original street layout and some of the architecture of old Hanoi. At the beginning of the 20th century Hanoi consisted of the "36 streets", the citadel, and some of the newer French buildings south of Hoàn Kiếm lake, most of which are now part of Hoàn Kiếm district. Each street had merchants and households specializing in a particular trade, such as silk, jewelry or even bamboo. The street names still reflect these specializations, although few of them remain exclusively in their original commerce. The area is famous for its specializations in trades such as traditional medicine and local handicrafts, including silk shops, bamboo carpenters, and tin smiths. Local cuisine specialties as well as several clubs and bars can be found here also. A night market (near Đồng Xuân Market) in the heart of the district opens for business every Friday, Saturday, and Sunday evening with a variety of clothing, souvenirs and food.

Some other prominent places include the Temple of Literature (Văn Miếu), site of the oldest university in Vietnam which was started in 1010, the One Pillar Pagoda (Chùa Một Cột) which was built based on the dream of king Lý Thái Tông (1028-1054) in 1049, and the Flag Tower of Hanoi (Cột cờ Hà Nội). In 2004, a massive part of the 900-year-old Hanoi Citadel was discovered in central Hanoi, near the site of Ba Đình Square.

Hanoi is sometimes dubbed the "Paris of the East" for its French influences. With its tree-fringed boulevards, more than two dozen lakes and thousands of French colonial-era buildings, Hanoi is a popular tourist destination. 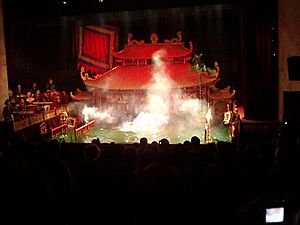 A variety of options for entertainment in Hanoi can be found throughout the city. Modern and traditional theaters, cinemas, karaoke bars, dance clubs, bowling alleys, and an abundance of opportunities for shopping provide leisure activity for both locals and tourists. Hanoi has been named one of the top 10 cities for shopping in Asia by Water Puppet Tours. The number of art galleries exhibiting Vietnamese art has dramatically increased in recent years, now including galleries such as "Nhat Huy" of Huynh Thong Nhat.

A popular traditional form of entertainment is Water puppetry, which is shown, for example, at the Thăng Long Water Puppet Theatre.

Hanoi has rich culinary traditions. Many of Vietnam's most famous dishes, such as phở, chả cá, bánh cuốn and cốm are believed to have originated in Hanoi. Perhaps most widely known is Phở—a simple rice noodle soup often eaten as breakfast at home or at street-side cafes, but also served in restaurants as a meal. Two varieties dominate the Hanoi scene: Phở Bò, containing beef and Phở Gà, containing chicken. Bún chả, a dish consisting of charcoal roasted pork served in a sweet/salty soup with rice noodle vermicelli and lettuce, is by far the most popular food item among locals. President Obama famously tried this dish at a Le Van Huu eatery with Anthony Bourdain in 2016, prompting the opening of a Bún chả restaurant bearing his name in the Old Quarter.

Vietnam's national dish phở has been named as one of the Top 5 street foods in the world by globalpost.

Hanoi has a number of restaurants whose menus specifically offer dishes containing snake and various species of insects. Insect-inspired menus can be found at a number of restaurants in Khuong Thuong village, Hanoi. The signature dishes at these restaurant are those containing processed ant-eggs, often in the culinary styles of Thai people or Vietnam's Muong and Tay ethnic people. Hanoi is also home to much of the dog eating culture of Vietnam, with several restaurants offering the dish in the Old Quarter and surrounding areas.

All content from Kiddle encyclopedia articles (including the article images and facts) can be freely used under Attribution-ShareAlike license, unless stated otherwise. Cite this article:
Hanoi Facts for Kids. Kiddle Encyclopedia.